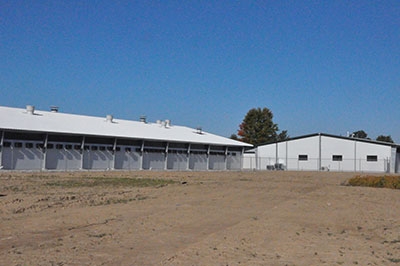 Lohmann Tierzucht has built two production barns in Southern Ontario that house and collect data on the company’s pure line breeds. This is the first time the company has produced its pedigree stock outside of Europe.

For the first time, pure lines of Lohmann Tierzucht’s laying hens are being raised outside of Europe, and the company chose Canada for the task.

The primary breeding company has built two production barns in the Caledonia, Ont., area.  The company has existing facilities at its home base in Cuxhaven, Germany, as well as in Denmark.

Not wanting to put all of the company’s eggs in one basket, Lohmann’s chief geneticist and managing director, Dr. Rudolf Preisinger, says it’s important to have a “homogeneous gene pool” outside of Germany in case Germany experiences a disease outbreak (such as avian influenza) and its border is closed to export.

Why Canada
“We’ve always had a warm welcome in Canada,” he says, and the company has had a growing presence here since 2000, when Lohmann first looked towards Canada to expand its production capabilities. That year the company purchased a large farm property in Ontario’s Haldimand County, where it established a grandparent and great-grandparent primary breeding facility. When describing the area, Khalil Arar, director of Canadian operations, says that “it’s important to us to be in a very biologically secure area” and that the company wants to ensure it’s a good neighbour. With this in mind, he says, they use the latest ventilation, heating and manure drying to eliminate odours and handle manure in a responsible way.

The company added a single-stage hatchery in Brantford in 2007, which is conveniently located halfway between the U.S. border with Michigan (and Detroit International Airport) and Toronto International Airport for ease of shipping day-old commercial stock to customers in North America and around the world. The fact that the company already had a presence in Canada and “we showed them that we could keep the birds clean (free of disease),” encouraged it to set up its new pure line facility in Canada, says Arar.

The new pure line operation is located on the opposite side of the same property as the primary breeding facility. It consists of two separate production barns. The first barn became operational in December 2013 and houses pedigree hens and roosters in individual cages (providing approximately 180 square inches per bird) as well as group cages to house hens from the same families. The second barn, which became operational in October 2014, houses birds in single-unit cages only. Day-old pure line stock birds are flown into Canada from Germany and housed in a nearby quarantine facility at another site until they are production age, at which time they are then moved into the pure line facility.

The purpose of having different types of housing is essential to the company’s breeding goals. Behavioural traits such as feather pecking and dominance can only be measured in a group setting, says Preisinger. However, gathering data on the most economically important traits of egg production, egg size and quality, and feed efficiency can only be done on an individual bird basis, which is best achieved in single-unit cages.

In fact, the ability to have birds in single-unit cages was another motivating factor for Lohmann to establish a pure line facility in Canada. “Here in Canada, you understand why the chickens must be kept in individual cages,” Preisinger told attendees at the pure line facility’s grand opening. He says that in Germany, it’s become extremely difficult to get research organized that requires chickens to be kept in cages, whether housed individually or in groups. All cages used in the German pure line facility had to be enriched with perches, nests and scratching areas to comply with welfare regulations in the country.

The grand opening of the pure line facilities took place Sept. 24, 2014, a date chosen to coincide with the company’s annual hatchery meeting, which was being held the same week in nearby Niagara Falls. Representatives from almost every country in the world Lohmann serves were given a tour of the second pure line barn. Guests were broken into groups by language spoken and led to different checkpoints, where staff from Lohmann’s head office demonstrated how technical staff on site will measure attributes such as body weight, egg weight, breaking strength, individual feed intake and individual egg weights. Attendees were also provided with information on biosecurity measures taken by the company and a general overview of how the barn operates.

Genetic data
Each bird has a wing band with an individual barcode that is scanned by an employee using a handheld device each time a measurement is taken that is unique to a particular bird. Using Bluetooth technology, the barcode data is sent to a tablet where the employee can then input data such as egg weight or feed intake for each individual bird. Eggs produced are also given identifying numbers so that the company knows which bird laid which egg, a crucial step for measuring egg quality traits such as shell strength and colour within a family of hens.

These measurements are then sent to Lohmann’s head office in Germany over a secure server where they are processed by the company’s genetics department and compared with data from its European operations.

The Canadian facilities will focus primarily on performance data from Lohmann’s white lines, as white eggs are dominant in several major worldwide markets including North America.

However, the Canadian facilities also have stock for all six of the company’s genetic lines and will be recording data for those breeds.

In Europe, where legislation has imposed mandatory colony and/or aviary-type housing systems and space requirements, data collection on traits such as nest acceptance and utilization of outdoor spaces is being measured, as well as individual performance when raised in floor housing (this is done using a transponder system rather than by individual barcode).

Good for Canada
Scott Graham, chair of the Egg Farmers of Ontario, says the EFO is proud that Ontario offers the kind of environment to attract a breeding company of Lohmann’s calibre: “It’s gratifying to have a global company invest in Ontario’s egg industry.” The EFO also made a policy change in its pricing to make the province more attractive to companies, paying full price for surplus eggs instead of the breaker market price, says Graham.