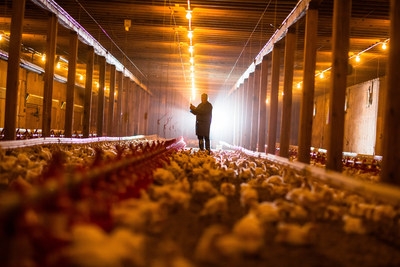 March 24, 2017, Ottawa, Ont – Chicken Farmers of Canada are fighting back against the “inaccurate and irresponsible portrayal of Canadian chicken production that is being used to target retail and foodservice companies.”

According to the industry organization, Mercy for Animals, a U.S.-based activist organization, has been using sensationalized video footage and accusations implying that this is representative of Canadian chicken farms. Other groups have also been using questionable information to fuel their campaigns and push an agenda to eliminate animal agriculture and shutter Canadian farms, CFC officials added.

“These tactics are shameful, inaccurate, deliberately misleading, and undermine the hard work and animal welfare standards of local Canadian farmers throughout the country,” the organization stated in a recent press release.

“We believe that this video footage isn’t from a Canadian chicken farm and appears to be recycled from previous propaganda campaigns that have taken place in other countries,” said Benoît Fontaine, chair of Chicken Farmers of Canada, adding 90 per cent of the country’s poultry operations are family owned and audited for animal welfare standards.

“Canadian chicken farms are run by hardworking men and women who take to heart their responsibility to uphold animal health and welfare on their farm and share Canadian values. They are proud ambassadors in promoting and defending their good management practices, and believe that there is no defense for the mistreatment of birds.”

The Chicken Farmers of Canada’s press release describes the organization’s mandatory Animal Care Program, which is administered across all 2,800 chicken farms in Canada.

“Animal rights groups claim that mistreatment of animals has no place in society today,” the press release stated. “We agree.”

“Farmers in Canada have a responsibility to the birds they raise, to the industry, to their fellow farmers, and to all consumers for upholding high principles of animal health and welfare on the farm.”