Canadian veterinarian Dr. Roger Thomson, a staff member of Wyeth Animal
Health (Canada), has embarked on a mission to change the lives of
impoverished villagers in Tanzania. 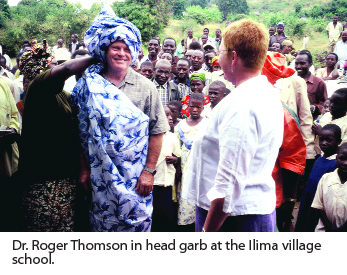 Canadian veterinarian Dr. Roger Thomson, a staff member of Wyeth Animal Health (Canada), has embarked on a mission to change the lives of impoverished villagers in Tanzania. For some time now, Dr. Roger Thomson and his colleague, Professor Uswege M. Minga of The Open University of Tanzania, have been working to help the 1,200 people who call Ilima village their home. The villagers live in abject poverty on less than one dollar a day and a small supply of food, which offers very low nutritional value and lasts for only half the year.

With the support of Vets Without Borders – Canada (VWB-VSF) and Wyeth Animal Health, Thomson and Minga have developed an innovative chicken-raising program to help the people of Ilima and also Lubanda – a nearby village of 1,300 people who are faced with the same struggles – to increase their food production, improve their health and escape the circle of poverty.

Five farmers from each village and two extension workers will be sent to Uyole Agricultural College for training. The farmers and extension workers will then educate the villagers, including school-aged children, on feeding, husbandry, and disease diagnosis and control to ensure healthy poultry production and a higher yield of meat and eggs. Vaccinations against Newcastle Disease and fowl pox will be conducted on a regular basis.

In addition, suitable markets will be identified to assist the villagers in the sale of surplus eggs, cock and culls to generate income.

Ilima and Lubanda will serve as test sites for this very important project, and if successful, the program will be expanded as soon as possible to the other villages of the ward: Katundulu, Ngujubwaje and Itula. The total population of the ward is 7,700.