Egg producer harnesses social media to educate the public and defend her industry. 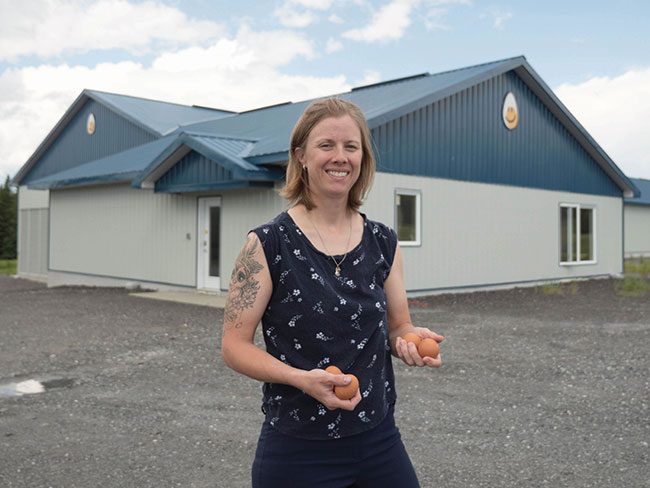 Quebec egg producer Caroline Fillion was just looking to break the solitude of working alone in her layer barn three years ago. That’s when she first started uploading photos and videos of her doing chores on Facebook and Twitter.

But she ended up bringing the world to her family’s farm in Saint-Sébastien-de-Frontenac, a two-hour drive south of Quebec City.

In doing so, she became an online ambassador and advocate for the egg industry in la belle province.

“It’s a lot of fun and very rewarding to share my daily routine and show people what it is I do as an egg producer,” says Fillion, a legitimate social media influencer with more than 7,000 Twitter followers. “But it also requires a lot of work and commitment.”

‘The Hen’ Fillion
The producer’s posts mostly involve her tending to the 14,000 Lohmann brown laying hens and 14,000 chicks she keeps in the newest of two henhouses – a free-run barn with automated collection belts and high-tech grading room built in 2017. In addition, Fillion responds to the many messages she receives from her fans across Quebec and beyond.

“Some tell me what videos they like best on chickens or eggs and why or they ask me questions about something they see in them,” Fillion says.

Others, she added, have chickens of their own at home and ask her questions about everything from poultry health to the differences between laying hens and broilers.

“Some call me la poule (The Hen) – they see me as an expert on chickens,” Fillion says, laughing.  “If I know the answer to their question I tell them. But if I don’t I refer them to a person or organization that does know.”

An honest defense
Not all of the messages Fillion receives through social media, however, are polite, inquisitive or respectful. Animal rights activists and militant vegans, for example, often send critical or hateful missives her way. “If I post a photo of me with my free-run birds all around me someone might say, ‘You’re cruel – your chickens have no space,’ which is not true,” Fillion says. “But I don’t whitewash farm work and I don’t shy away from defending the realities of farming. When we do an annual turnover and all our birds go the slaughterhouse, for example, I publish that.

“However, I also explain that we respect the many standards and laws that govern our industry and that have helped to improve conditions,” Fillion continues. “And I tell people that our birds allow us to earn a decent living and that we want and need them to be as healthy as possible.”

Though she tries to understand and not rush to judge, Fillion says she has come to realize that there is no pleasing people who are opposed to and obsessed by the notion of animals being exploited on farms.

Two years ago, Fillion was attacked and threatened online by a small group of militants in France. News of the threats – and Fillion’s plucky defense of her farming practices and the modern egg industry – made headlines and earned her appearances on some of Quebec’s most popular TV talk shows.

“At one point, I was afraid, not for me but for my family,” says the 40-year-old, who is married with three young children. “But I decided to keep posting and not be intimated.”

Path to poultry
Courage and determination are nothing new for Fillion. The youngest of three children, she grew up dreaming and planning to take over her parents’ dairy farm.

“I didn’t see myself anywhere else,” Fillion recalls. “I always wanted to be my own boss and work outside with animals.”

A near-fatal snowmobile accident in 2004 changed all that. After months of rehab and painful recovery from multiple fractures, a concussion and a pulmonary embolism that almost killed her months after the accident, Fillion was forced to abandon the idea of tending large livestock.

It was Bertrand Rainville, a teacher at the Cégep de Lévis where Fillion had just completed a college degree in farm management, who suggested egg farming as an alternative career.

“He told me about the need for young egg producers in Quebec and about an annual contest the Fédération des producteurs d’œufs de consommation du Québec had where you could win a bird quota,” Fillion says. “When I looked into I immediately realized that egg farming was for me.”

Fillion was one of some two dozen entrants who submitted a business plan to the contest in 2007, where she was a finalist.

It was on her third entry in 2009 – the year her parents Serge and Michelle sold the family’s milk herd – that Fillion won the contest and the 5,000-bird quota.

The next year Fillion built a 93-feet-long, 29-feet-wide henhouse and equipped it with used cages from Newfoundland to house her first flock of white Lohman laying hens. She had a total of 8,100 birds, including the 5,000 under the quota and another 3,100 on loaned quota.

Cautious expansion
Fillion added a fourth row of cages and increased the number of birds to 10,800 in 2014 – the year she met her partner, Luc Normand, a machinery salesman for Shur-Gain, and gave birth to the couple’s first child.

Two years later, Fillion decided to build the second henhouse using a free-run system made by Salmet that she and Luc first saw at a poultry show in London, Ont., and then at the company’s facilities in Germany.

The 140-feet-long, 60-feet-wide building features the latest henhouse and egg production technologies and heated floors in both the processing room and the 25-foot-by-60-foot area where day-old chicks arrive and live for 19 weeks. They also built a garage and heat plant with a wood furnace that burns three truckloads of eight-foot-long logs that are mostly harvested from the Fillion family’s extensive property.

Though her 32,100-hen farm is slightly smaller than the average Quebec egg farm, Fillion has no plans to expand her business any further.

“I think we’re at a good size right now,” says Fillion, who shares the workload in the two henhouses with employee Danielle Lapierre, who works weekday mornings, and Luc, who works weekends. Her father also helps out by checking cages and removing dead birds in the older building.

“We’re becoming more and more automated for lighting and feed and egg collection,” Fillion adds. “I’m very proud of our operation. It gives me the energy and inspiration to plan and do posts on social media that share my passion for egg production.”