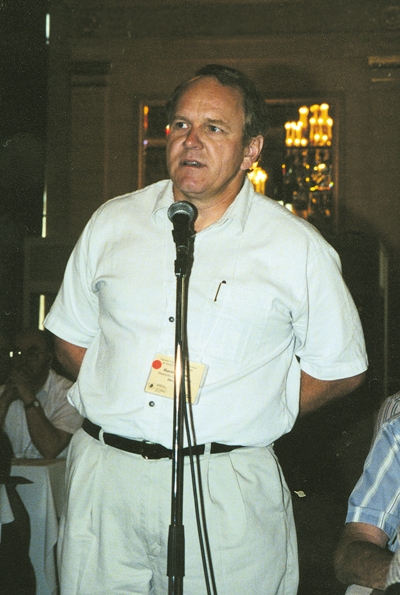 In the final session of CEMA’s summer meeting, held at the Fort Gerry Hotel in Winnipeg July 9 to 12, the Canadian Egg Marketing Agency reached an agreement to deal with Manitoba’s overproduction of eggs.

At issue was the production from 130,000 too many birds that was slated for industrial processing under the Grow For program.

The issue had been a stumbling block for the agency – forcing them to defer other issues like the federal-provincial agreement, and future quota allocation.

It was believed a deal had been reached during a public meeting on July 11, however when the meeting resumed after a recess, it was announced that the deal was “a dead duck.” Apparently the delegates had been confused over the timeline for the elimination of the 130,000 birds. As it now stands, Manitoba will eliminate the 130,000 birds by not replacing flocks as they come out of production. The process is to be completed by about October 17, 2000.

“We were back and forth with our staff (throughout the meetings) because it’s fine to pick a date, but you have to be able to make it happen. Our staff felt confident that by not replacing flocks that are coming up – and we had one or two producers that volunteered to take their flocks out early – they felt we could meet the date,” said Harold Froese, chair of the Manitoba Egg Producers.

In spite of the CEMA’s success at reaching a deal, emotions were running high at the meeting. On the evening of  July 11, at a formal dinner, Manitoba’s Agricultural Minister gave a speech that inflamed the passions and caused a walkout by delegates and their families from New Brunswick, Quebec and British Columbia. Some thought that not only was a deal an impossibility because of the nature of the speech and the mindset of the delegates, but that the supply management system for eggs was in peril.

“You don’t strip away $700 million (the Crow rate) and expect the status quo to remain,” said Rosann Wowchuk, Minister of Agriculture, to the dinner crowd. “Unfortunately, our vision of an expanding egg industry is not held by everybody.”

She went on to say Manitoba isn’t asking other areas to give up quota to Manitoba.

“The demand for processed eggs has put pressure on the supply manage-ment system. I have to tell you (the National Products Council’s decision on Manitoba’s quota appeal) is perplexing and bewildering. I’ve had discussions and written to the federal minister about it.”

The final statement by the minister, made as the delegations were walking out, was seen by some as a direct challenge to Ontario and Quebec.

“Our vision for the future in Manitoba is being able to meet the growing market demands, whether they be the Canadian or export markets,” she said. “Supply manage-ment has served your industry well in the past and should continue in the foreseeable future. However, we need to remind ourselves that supply management, whether it is provincial or federal is a privilege, not a right.”

Asked why he walked out in protest, chair of the British Columbia board, David Taylor said, “I was disappointed (the minister) would make such inflammatory remarks. We are seeking resolution not further entrenchment of the positions. I think CEMA has gone a long way towards accommodating Manitoba.”

While the minister claims to have not known that delegates walked out of the formal dinner, she was unapologetic for her remarks.

“It was a message we wanted to get out. It’s important to Manitoba. By working together we can come to an agreement.”

One CEMA director, who asked not to be named, said it wasn’t the content of the minister’s speech that caused the uproar, but it was the setting she chose to speak out.

At the dinner, he said, there was no opportunity for the delegates to respond. Had she made the statements at one of the organized meetings, it would have been more acceptable.

But Laurent Souligny, CEMA chair, said the comments might have helped break the deadlock on the over-quota production issue.

“I would say the comments made (at the dinner) had a positive effect on the results of the meeting (July 12). As a matter of fact, I would say it added pressure (to get a resolution). This is the way I wanted it to go in the first place, too bad yesterday there were some misunderstandings.”

In an earlier speach, prior to a deal being reached, the agri-minister outlined her government’s position more fully.

“I’m very concerned (with the inability of CEMA to reach an agreement in the afternoon session). People have to recognize we’ve had changes here with the Crow (rate change). We need the chance to bring some opportunity to this province. I’m disturbed to hear that the discussions are around reducing flocks not increasing quota. We have to be given the opportunity.”

She added that while the former conservative government of Manitoba was reportedly considering removing the province from the supply management system, her government has no such plans.

“Supply management is a very good system, but we do want fair treatment. We want to take advantage of the present system. When you look at supply management and the income level, you realize the value of it.”

“If you look at the financial report from CEMA, the cost of using the levy system to supply processors with additional production just doesn’t make sense any more,” said Froese.

He said the Manitoba Egg Producers would prefer to see a system developed where eggs for processors are administered by CEMA, but not funded through the levy system.

“I’m not sure all the provinces are ready for that yet. But, based on a financial assessment of CEMA any future allocations should be done on a Grow-For basis, which means CEMA and the provinces would still control the inventory, but it would be outside the levy system. We can’t absorb the (levy system) cost anymore. It has to be a user pay system.”

Souligny tends not to look at just future allocation when he considers Grow-For, but rather at the need for a new, more comprehensive federal-provincial agreement.

“We intend to deal with (the new FPA). We hate to delay it, but we had to get the over-allocation out of the way first. If we come up with a new way of controlling future allocation and how to finance it, then that has to be part of a new or revised FPA. That is why we can’t move faster on that issue.”

He said CEMA is also waiting to see how the Chicken Farmers of Canada shape their new FPA agreement, so CEMA can avoid any of the same pitfalls.

He commented that the issue with Manitoba did slow down the process, he is confident that since it has been dealt with, progress will be made on other challenges.

“It is just like you are in a canoe and you have eleven paddlers – and one of those paddlers is rowing the wrong way. That’s what we have to convince the board – that we have one common vision and that is for the producers of Canada.”