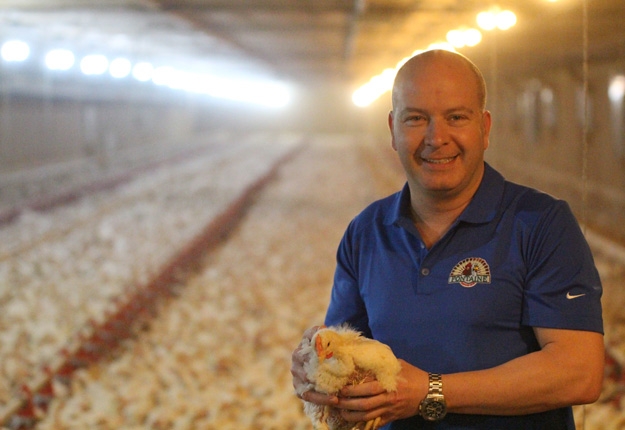 Chicken Farmers of Canada has unveiled its 2020 Executive Committee. The 15-member Board of Directors, made up of farmers and other stakeholders from the chicken industry, has elected:

Benoit Fontaine, Chair (Stanbridge Station, Quebec)
Hailing from Stanbridge Station, Quebec, Benoît Fontaine, Chair of Chicken Farmers of Canada, first joined the Board of Directors in 2013 as an alternate and became the Quebec Director in 2014. He farms in the Lac Champlain area and raises chickens and turkeys. A former high school Canadian history teacher, and 2nd generation chicken farmer, Benoît has also been heavily involved in the Union des producteurs agricoles since 1999. Benoît became Chair in 2016.

Derek Janzen, 1st Vice-Chair (Aldergrove, British Columbia)
Derek Janzen, 1st Vice-Chair, and his wife Rhonda have farmed in the Fraser Valley since 1998. They currently raise chickens and manage commercial laying hens. Prior to farming, Derek worked for B.C.’s largest poultry processor for nearly nine years. He worked his way up from driving delivery truck to sales and marketing where he took the position of Major Accounts Manager. Derek’s experience in the processing industry has served him well with his board involvement. Derek has held various positions on a variety of other boards too, including Chair of the B.C. Egg Producers Association and he was appointed by the Minister of Agriculture as a member of the Farm Industry Review Board, B.C.’s supervisory board.

Nick de Graaf, 2nd Vice-Chair (Port Williams, Nova Scotia)
Nick de Graaf is a third-generation poultry farmer in the Annapolis Valley of Nova Scotia operating the farm founded by his Dutch grandfather in the early 1960’s. Today the farm produces both chickens and turkeys. Nick is also part of Innovative Poultry Group (IPG) which farms broiler breeders and owns Maritime Chicks, a new, state-of-the-art hatchery employing the HatchCare system. In addition to poultry, Nick grows more than 1,600 acres of wheat, corn and soybeans. He is self-sufficient in the production of corn and soybeans for his on-farm feed mill where he processes poultry feeds for his own flocks. Nick is in his 9th year as a Director with Chicken Farmers of Nova Scotia. He has held several roles with Chicken Farmers of Canada, including as Chair of the Production Committee and the representative to the National Farm Animal Care Council (NFACC). Nick and his wife, Trudy, have three children and two grandchildren.

Tim Klompmaker, Executive Member (Norwood, Ontario)
Tim Klompmaker lives in Norwood, Ontario and was elected to the Chicken Farmers of Canada Board in 2017. Tim started farming in 1984 along with his wife Annette and his three sons. He is a third-generation chicken farmer with the fourth generation already in place and running chicken farms of their own. Tim served as a District Committee Representative for Chicken Farmers of Ontario before being elected to the Ontario Board in 2000. He previously served as Alternate Representative for Ontario from 2012-2013, and has participated on the Policy Committee, the AMU Working Committee, the Governance Committee, and as the rep to NFACC. He has also served as 1st Vice-Chair of Chicken Farmers of Ontario.

The Board looks forward to continuing its work together, ensuring that Canada’s chicken industry continues to deliver on consumer expectations for excellence. The vison for the organization is that Canadian chicken be consumers’ preferred and trusted protein.

The mission is to lead and grow a sustainable Canadian chicken industry, while strengthening trust and enhancing value for Canadians. Canadians want Canadian chicken, so we deliver them fresh, locally raised food, just the way they like it.

The Raised by a Canadian Farmer brand is a showcase of the commitment of farmers to provide families with nutritious chicken raised to the highest standards of care, quality and freshness. People care deeply about their food, about knowing where it comes from and that what they’re serving to their family and friends is of the highest quality.