Examining the impacts of being able to draw workers from dozens of countries, high Canadian unemployment rates, moves to change work permit restrictions, and more 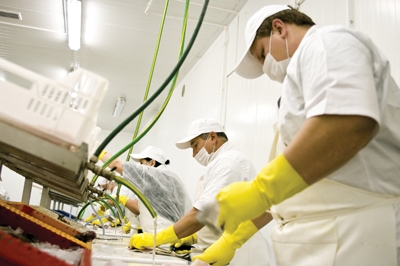 People from an increasingly wide range of countries are finding jobs as temporary workers in Canada’s food system.

The landscape of the agricultural workforce is changing in Canada, affecting Canadian workers, workers from other countries and employers as well. More than 300,000 temporary foreign workers are employed in Canada each year and about 40,000 of those are in the agriculture sector, says Dr. Kerry Preibisch, a sociologist in the department of sociology and anthropology at the University of Guelph. Preibisch’s look at changes in the Canadian farm labour market over the past decade was recently published in the International Journal of Sociology of Agriculture and Food – and one major change she’s noticed relates to how many countries foreign farm workers now hail from.

“People from an increasingly wide range of countries are finding jobs as temporary workers in Canada’s food system due to government policy changes in 2002,” notes Preibisch. Back in 1966, Canada instituted the Seasonal Agricultural Workers Program, a temporary migration program based on bilateral agreements with 13 different countries, with most from Mexico and Jamaica. Since 2002, however, the government has allowed employers who could demonstrate they are facing a labour shortage for any low-skilled occupation – including agriculture – to hire migrants on temporary visas from anywhere in the world. Preibisch notes that by 2008, the Canadian agricultural sector employed foreign workers from almost 80 countries. And the types of work they are hired for, she observes, has also broadened, from picking bait worms to vaccinating chickens.

This ability of Canadian employers to pull from a ballooning number of countries hasn’t had a positive impact on temporary workers in many cases. While workers in processing plants are, for the most part, in unionized environments with standardized working conditions, overtime pay and so on, those on farms are more vulnerable. Simply put, the increased competition from workers from many other countries puts pressure on people to accept unreasonable working conditions. “If they don’t agree to working longer hours for example, workers can be threatened with being replaced with those from other places,” observes Preibisch. “Many Mexicans are now being replaced with Guatemalan people, not so much because they’ll take less pay, but because Guatemalans are perceived as willing to work longer hours and work harder in comparison.” While most of Canada’s temporary foreign agricultural workers still come from Mexico followed by Jamaica, Guatemala is now in third place. Migrants from many areas of the globe are more desperate than previous groups of workers, Preibisch asserts. “They face less political freedom and more marginalization and are willing to work very hard here,” she notes.

In her study, Preibisch also observes a significant lack of regulation and monitoring of migrant recruitment and employment in Canada. “This can and does result in abusive practices by employers, and some conditions which could be considered close to slavery,” she states. While employment standards are provincial – employees in Ontario for example, must be given two 15-minute breaks and a 30-minute lunch period within an eight-hour shift – Preibisch says there needs to be more co-operation between federal and provincial labour agencies to ensure all workers are treated according to legal requirements.

Human Resources and Skills Development Canada (HRSDC) has all foreign workers and their employers sign a contract that “provides details about the worker’s job and conditions of employment, including the maximum number of hours of work per week, the wage rate for those hours, and the amount of money that will be deducted from the worker’s pay.” Also on the HRSDC website is information about “government liaison officers of source countries in Canada,” who can intervene on a foreign worker’s behalf, and “confirm that workers have acceptable housing, ensure that workers have health insurance and Workers’ Compensation coverage, gather details of worker injuries, collect pay records from employers, approve worker transfers, and consult with employers who wish to terminate a worker’s contract.”

However, Preibisch notes that one of the most urgent issues in the eyes of many with regard to work contracts and permits is that they are employer-specific. This means that a person coming to Canada is only permitted to work for one employer. If such an employee wants to leave his or her employer for any reason, Preibisch says a process does exist to have the permit applied to another employer, but it is too lengthy to have any impact. “Therefore, some are calling for sector-specific permits,” she notes, “so workers are able to work at any employer in the sector within the time-frame of the work permit.”

Neither Chicken Farmers of Canada (CFC) nor Egg Farmers of Canada (EFC) collects data on farm worker demand or on the number of foreign workers employed on chicken or egg farms. CFC would not provide a comment on the topic of sector-specific permits nor whether more specific guidelines are needed for chicken farmers with regards to the conditions provided for foreign workers; CFC senior communications manager Marty Brett says that CFC provides guidelines relating to bio-security and more, which all farm workers and visitors should follow. EFC Chair Peter Clarke says he can’t provide a comment about whether EFC supports sector-specific permits as it is not a topic that has been discussed at any meetings so far. Like CFC, EFC provide guidelines that all farm visitors and workers should adhere to. With regard to whether egg farmers need more specific guidelines about how to treat foreign workers, Clarke says, “I don’t see extra requirements as necessary, and I believe all Canadian egg farmers provide good working conditions.” The Poultry Services Association did not choose to respond to questions on these issues.

Canadian Poultry and Egg Processors Council (CPEPC) president Robin Horel canvassed his members about their general need for workers, and says that the need appears to be mostly in Western Canada. “Three to four years ago, the need was very strong in B.C. and Alberta, particularly in Alberta, and to some extent Saskatchewan,” Horel notes. “The need subsided to some degree, but within the past year, labour has again become a critical issue.”

Horel also reports that responding members see the approval process for foreign workers as “very difficult and cumbersome.” In addition, he points out that foreign workers employed by his members enjoy the same wages, benefits and working conditions as Canadian workers. CPEPC members who responded to the questions did not support the notion of sector-specific permits. One noted that “if we live up to the commitments we have to the employees we bring in, we do not want them leaving for another employer after we have gone through all the hoops. It would be OK after a certain time.” Another noted, “I think employer-specific should remain in place, unless the employers themselves approve the change. We spend time and resources sourcing and then training employees at our plants.”

As unemployment stays high or worsens in some areas of Canada, the question arises as to whether as many temporary foreign workers will be needed in the country’s agricultural sector. Preibisch asserts that even though unemployment here has risen, Canadians avoid many agricultural labour jobs as they are difficult and seasonal. “Many employers do want to hire Canadians but migrants can become a preferred source of labour,” she notes. “They also find it hard to retain Canadians in some cases.” To be able to hire foreign workers, employers currently have to advertise and show they can’t fill the positions with Canadians, but Preibisch notes that there are ways around this requirement. “The employer might do limited advertising, and it’s also plausible that some Canadians are hired, but the first day of work is made so hard and unpleasant that they quit, and word spreads.”

However, on April 19, the Canadian government announced that preparations are being made to link the federal Employment Insurance program to the Temporary Foreign Worker program. This could mean employment insurance benefits could be restricted or denied to people in areas where foreign workers have been hired in the past, thereby encouraging them to take the jobs. In addition, it could mean that employers in these areas could be denied access to foreign workers. Response from agricultural employers has been mixed; the thought of hiring Canadians to take jobs under duress seems rife with difficulty to some.

There are also regions in Canada where workers are hard to find, and in these areas – particularly in Alberta where the oil patch continues to attract labourers – Horel says the availability of foreign workers is imperative for Canada’s poultry and egg processors. He says his members need skilled workers as well: “These trade skills are not recognized by Canadian regulators in a timely fashion, and a serious shortage will hurt the economy.”

Skilled labourers usually seek to emigrate permanently to Canada instead of applying as temporary workers – tens of thousands do so annually. This huge number of applications has led to a seven-year processing backlog, and Citizenship and Immigration Canada has decided to deal with it by destroying applications from over 280,000 people. The $130 million in fees paid by these applicants will be refunded and they will be able to re-apply under new criteria.

In addition, and which will hopefully benefit CPEPC members a great deal, there will likely be a pilot project that will allow provincial/territorial governments to go through current applications and highlight those that match their needs.