A close look at the method and benefits of using insulated concrete forms to construct new barns. 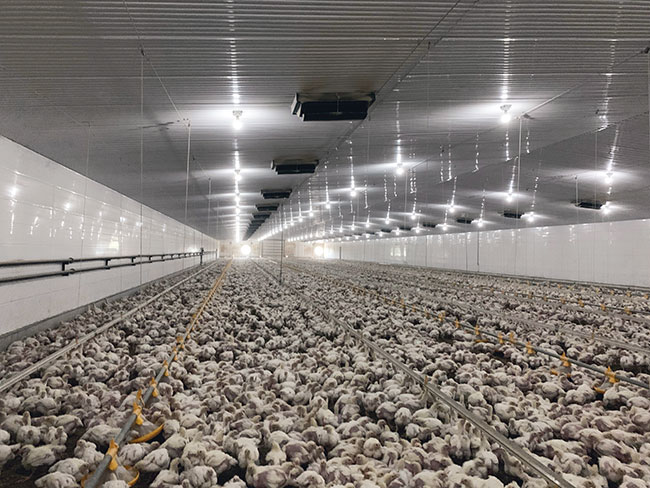 The Szmietts believe their broiler barn is the first in Ontario to use insulated concrete forms. PHOTO CREDIT: Szmiett Farms Ltd.

Putting it mildly, it’s been a quite a while since there has been a new option for construction of poultry barns in Canada. You may already have heard of insulated concrete form (ICF) construction, and because it’s being used for new barn builds every year, Canadian Poultry decided it’s time for a closer look at the method and materials.

The walls of an ICF structure consist of interlocking rigid blocks of expanded polystyrene foam separated by plastic webbing, with concrete poured into the core which runs from the footing to the bottom of the truss. No insulation or vapour barrier is required. ICF walls are typically between 6” and 12” thick. To finish the interior of a barn, metal sheeting is usually installed. On the outside, siding goes on quickly, attached to fastener strips embedded in the insulation.

ICF structures are gaining popularity because they offer low heating bills, good durability and high comparative performance to conventional buildings in terms of floods and earthquakes. Globally, according to a Market Research Future report entitled ‘Insulated Concrete Form Market- Forecast 2027,’ the ICF market is expected to grow at a compound annual growth rate of 7 per cent. While various sources report that residential applications make up over half the current market, ICF is also being used increasingly for commercial, institutional and agricultural buildings, including poultry barns.

Ontario ICF barn
Without further ado, let’s jump into two recent ICF builds, one in Ontario and one in BC. Brian Szmiett of Strathroy, Ont. built his own ICF broiler barn in 2019. He and his wife Jessie chose ICF for better insulation and durability (nothing to rot and structurally more rigid) and they believe they had the first ICF poultry barn in Ontario. The barn is heated with a radiant in-floor system with two natural gas boilers.

“I’ve always been interested in building methods, and had used ICF in the basement of our house which I built in 2015,” Szmiett says. “We’ve seen savings in our energy costs and I’d certainly go with ICF again for our barn. We currently grow on a ten-week cycle so the barn sits empty for periods at a time, during that time we never add any heat to the barn as it maintains its temperature so well. Also worth noting is how quickly we can heat the barn when a flock is coming in.” Szmiett explains that even with only in-floor heating, the barn floor temperature can be raised at a rate of over 2°C/hr.

Szmiett believes the cost is slightly more for ICF barns compared to stick frame in normal times (not in times of pandemic inflation) but he notes that conventional barns have to have continuous insulation on the outside to be comparable to ICF barns in terms of insulation value and heating requirements. “The stick frame barns only have insulation between the studs,” he explains. “With ICF, you have 3.25” of continuous expanded polystyrene (which doesn’t lose thermal value of it becomes wet) on 100 per cent of interior and exterior wall surfaces.”

He adds that the structural strength is far superior as it is a 6” concrete core with rebar. “A tornado might blow the roof off but the walls will stand,” he says, “but even then, our truss plates are wet set into the concrete and bolted into bottom cords to prevent uplift from storms.”

Overall, Szmiett believes that with labour rates on the rise and the complexity of advanced framing methods now being used to build homes, ICF is an impressive and simplified method of construction that gives excellent thermal value, stops air infiltration similar to spray foam and offers great structural strength. “So it makes sense to start using it in other sectors like poultry barns, shops and potato warehouses,” he says, “like McCain has already been doing in other provinces.” Szmiett notes however, that it may be difficult to find contractors who work with ICF as it’s mainly used right now in the premium custom home market. 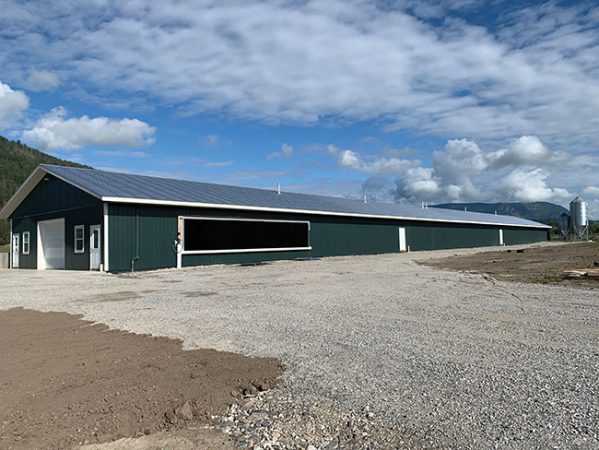 B.C. ICF barn
Ray and Melanie Baylis chose ICF when they built their own broiler barn in August 2020 in Armstrong, BC (Noble Farms). They also have a broiler barn management company and are now overseeing their second building of an ICF barn for one of their clients. To Ray and Melanie, ICF offers many benefits such as superior energy efficiency and pest control because the barn floor and walls create a complete enclosure. The only place where air enters or exits the building is through inlets and fans.

“We wanted to incorporate as many efficiencies as we could in our barn,” says Ray, “and we were concerned about cost, but we got a few quotes and found that they were, at the time in 2020, only about 10 per cent more than stick frame. We knew that we would have greater energy efficiency and not have to deal with the costs and the potential flock health impacts of mice or darkling beetles and we would also achieve better air quality, so we went for it. With the barn build we’re now doing for a client, it’s cheaper than a stick frame barn would be due to price of lumber.”

Baylis notes that all the companies they got estimates from offer similar systems, and they went with Fox Blocks because they just needed plain blocks (no rounded corners or other options offered for residential ICF builds) and they had those at the best price available locally.

In terms of heating (the Baylis barn has radiant heat tubes using natural gas), the barn has an insulation value of about R17 compared to the typical R10 of a stick frame barn. “It’s much easier to control and maintain the environment, both heating and cooling, in a completely sealed building,” Baylis explains. “You really notice it when we ship out the birds and shut off the heat and clean, how long it stays warm in the winter afterwards. And the entry rooms don’t need heating like they do in a stick frame barn.” Baylis also estimates that the barn’s utility bill (electricity and natural gas) is probably at least 20 per cent less than a comparable stick frame building.

Another benefit is a shortened construction timeframe by about six weeks. “The walls go up fast and once the walls are in, you’re done the framing, poly outside sheeting and insulation in that one step,” says Baylis. “The footings are identical to stick frame but a little wider, but then the blocks go right on the footing and you don’t even have to brace them for your foundation wall. No messy forms to deal with and have to strip later.”

On the inside, metal sheeting can be applied in an ICF barn, but Baylis notes that if you want metal sheeting in a stick frame barn, it must be attached to plywood – and also that many conventional barns have only plywood, which he considers a flock health risk. “I think bacterial build-up happens in plywood,” he says. “And when I do my yearly deep cleaning with high pressure hot water, the metal comes up like new with no hold for bacteria, but when you blast that into wood, it affects the fibres and probably makes it easier every time for bacterial to take hold. With the metal sheeting, which you can have in an ICF or conventional barn, it’s so clean.”

Baylis adds that ICF does take more planning as it’s difficult to go back and move an opening for a door or fan or feed auger. However, once you have those all planned, you just frame around the openings and pour the concrete.

It’s very hard to get numbers on total barn builds in Canada using ICF. Fox Block distributor Windsor Plywood in Nanaimo, BC has so far supplied two chicken barns in the central Vancouver Island area. Project Coordinator West Jepson says there are busy contractors he recommends for ICF projects, but “it is such a user-friendly product, you could do it yourself after a two-day on-line course.” AMVIC has so far been involved with two ICF broiler barns in Ontario and one in Saskatchewan.