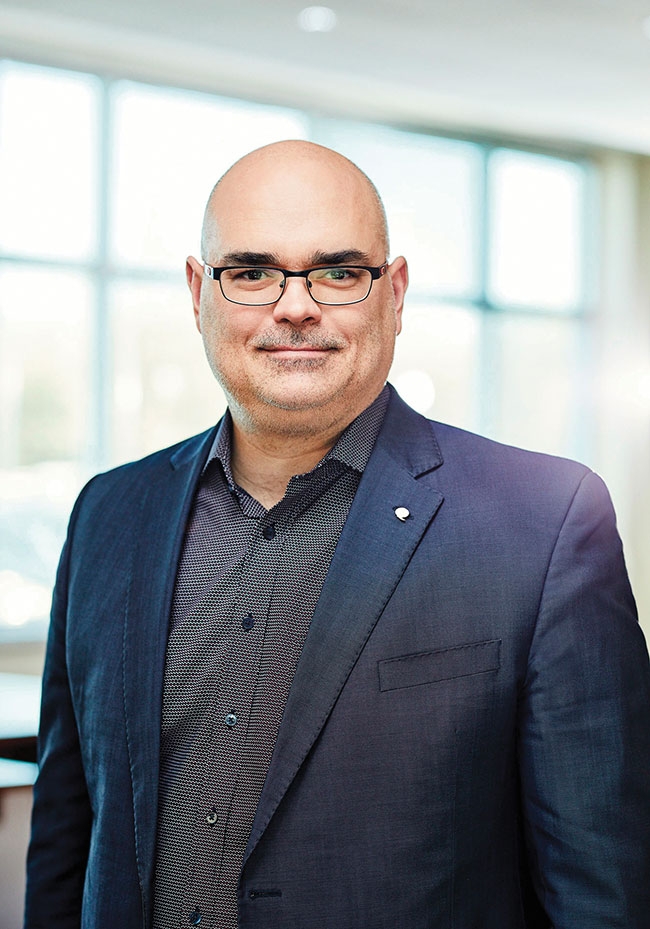 When brothers Christian and Gislain Houle were growing up on their parents’ poultry farm near Drummondville, Que., the trucks that brought feed for the family’s egg and broiler birds always left empty on the return trip to the local feed mill.

But since 2006, when the brothers merged their own egg and commercial crop-centric commerce with their parents’ business, the feed mill’s trucks make the return trip with full loads of the family’s own corn, wheat or soy.

“We sell our entire crop production to the mill and we buy it back from them as feed,” says Christian, who also serves as first vice president of the Fédération des Producteurs d’oeufs du Québec. “We’ve created a great circular system.”

Another big change that the brothers have implemented – one that will be fully completed this summer – has been the introduction of cage-free aviary systems and automated egg collection systems in their three laying barns.

“They provide a perfect overview on birds and nests and guarantee an excellent production of first-class quality eggs,” Christian says. “Now, birds are free moving and live in three dimensions rather than two.  And having the bird climb to lay eggs instead of the floor saves having to bend over 100,000 times to collect eggs.”

The changes are the result of a carefully planned and executed modernization and diversification of the Houle brothers’ farm activities and revenue streams.

The pair now run three companies that produce field crops and pullets, eggs and broilers in eight barns on three properties where two dozen people work, most of them full time.

The oldest and largest of the companies is called Le Meunier 8, a name that refers to a feed company their father Raymond once ran on the family’s original farm on the eighth concession in Saint-Edmond-de-Grantham, a parish municipality in south-centre Quebec, a 10-minute drive west of Drummondville.

The early days
Raymond, now 75 and still working part time with his sons, began his egg business near there at age 12 with several dozen laying hens he kept in a shed behind his father’s house, riding his bicycle into Drummondville to sell eggs door-to-door.

“Dad says our grandfather always told him, ‘Raymond, don’t keep chickens, you’re gonna lose all your money,’” Gislain says.  “For years he did lose money on every dozen eggs he sold. But he kept at it and learned the business and controlled his costs and grew his earnings.”

Gislain, 47, says he dreamed of being an egg farmer like his father from an early age.  After graduating from the technical college in Drummondville, he struck out on his own and started producing crops and eggs with owned and rented fields and quotas.

His brother Christian, a year older, took a more circuitous route back to the farming life. According to Gislain, Christian left their family’s farm to do a university degree in computer programming with the hope of working for a company in the city.

But he says his brother caught the farming bug again in October 2000 while attending the International Production and Processing Expo in Atlanta – the world’s largest annual poultry, feed and meat technology show.

“It was there he realized that he could integrate his two passions: agriculture and computing,” Gislain says. “After that he decided to get back into farming.”

The two brothers were soon in business together in the Drummondville area, where they specialized in producing eggs and field crops.

Desire to diversify
Their desire to expand the business and to diversify their revenue streams and product offerings were the impetus for their 2006 partnership in Le Meunier 8 with their parents, who were nearing retirement.

“Dad was doing only eggs and some broilers, but no crops,” Gislain says.  “We brought in a lot of fields and rented a lot of egg quotas and got really big really fast.”

According to Gislain, at the time of the merger their father had 20,000 laying hens and 2,500 kg of broilers per square metre.  (In Quebec, broiler quota is based on chicken weight per square metre.) Today, the business boasts nearly 4,200 square metres.

“We also now have 120,000 hens and raise our own pullets,” Gislain says, adding that he and his brother own quota for only 1,000 birds. They rent the rest from Quebec’s poultry marketing board.

Gislain says they first introduced the aviary system to a laying barn in 2013. This summer they will compete the conversion process by outfitting their last barn with a new cage-free system.

According to Gislain, 100 per cent of the farm’s grain-fed, free-run broilers continue to be sold to Ferme des Volitigeurs, a Quebec grain chicken processor and household brand name in la belle province that has been buying the Houle’s chicken for decades.

Cream of the crop
In regards to crop production, the Houle brothers were only working 100 acres in 2006. Today, they are producing on more than 2,000 acres. They sell all of their crop production to the same local mill they buy it back from as feed in what is a seamless circular transport cycle.

“Our field yields are better too thanks to our use of GPS, auto pilot and other automated farming tools,” notes Gislain, who is in charge of livestock while Christian manages crop production.

He adds that he and his brother are also always searching for and experimenting with find innovative ways to increase crop yields and lower costs, such as the use of collected chicken manure to fertilize fields.

“We’re always trying new things and production techniques for our corn and soybean,” Gislain says.  “We like to experiment using small parcels of land.”

The future of their family’s business looks secure, he adds, since several of his five children and Christian’s four are interested in farming. “All of them have worked here and some are studying agriculture in school and getting ready to take over the business,” Gislain says.  “I’m sure they’ll come up with new ways and methods of modernizing and diversifying our operations even more than my brother and I have done.”