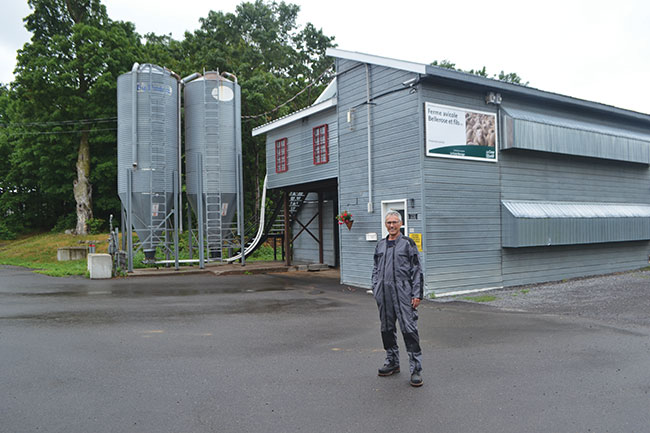 Christian Bellerose, a broiler farmer based in St-Félix-de-Valois, Que., has been an early adopter of numerous impactful innovations. PHOTO: Faktory 66

Sustainability has never been an empty buzzword for Quebec broiler producer Christian Bellerose. Rather, it’s been a guiding light in a long career marked by visionary innovations and investments in the most modern methods of animal husbandry.

“My goal from the beginning has been clean and healthy production,” says Bellerose, 64. “My approach is the antithesis of the American factory farm.”

It’s a path Bellerose chose early in his agricultural career, which began on his family’s broiler farm in St-Félix-de-Valois, a poultry-rich rural community an hour’s drive northeast of downtown Montreal.

After graduating with distinction from the animal sciences program at the St-Hyacinthe campus of Quebec’s college-level Institut de technologie agroalimentaire in 1976, Bellerose spent the next 15 years as sales director for the farmer’s coop in Joliette, a 20-minute drive from his family’s farm. The coop notably served the more than 50 poultry producers in the region who operate some 200 barns.

Taking the reins
Bellerose left the coop in 1990 to buy and run his father’s farm, a business that today produces 1.7 million kilograms of 2-kg female and 2.5- to 4-kg male birds in five barns on two sites.

From the get-go as a producer, Bellerose took regular trips abroad to see and learn firsthand about different chicken production systems. He credits those trips – to the U.S., Europe, South America and Asia, including several visits to China – for opening his eyes and mind to the realities and challenges of broiler production around the world.

“I learned that the practices of low-cost, high-volume producers in places like the U.S. and China don’t evolve,” Bellerose says. “They continue to suffer from the same bad management practices and diseases.”

It was in Europe, where chicken is the second most produced and consumed meat (after pork) and producers face issues similar to their Canadian counterparts – everything from regulations, taxes, energy and feed costs to stocking densities, indoor rearing practices and environmental and health concerns – that Bellerose discovered many novel methods for rearing broilers in more cost-efficient, animal-friendly ways.

He has imported and incorporated some of those innovations into his own business over the past 30 years.

An early one was a computer-based, automated system from Holland and France to provide food and water and control lighting that Bellerose installed in his barns in 1994. “I was one of if not the first broiler producers in Quebec to computerize things,” says Bellerose, who works with his son Philippe. “Once other producers saw how well it worked, I helped them to convert their barns.”

Bellerose has continued to upgrade his system, which now provides him with round-the-clock information and updates from inside his barns. “In the morning I use my tablet to validate everything and see the quantity of food and water being consumed. I can even predict equipment that is having or could have a problem based on historical data.”

Another cutting-edge innovation that Bellerose imported from France 15 years ago was a feeding system that prohibits chicks from getting into trays.

Around the same time, he also spearheaded a European-inspired project to reduce pollution by creating a value-enhanced biomass made from chicken manure mixed with wood chips and straw. Despite support from the Quebec government and agricultural circles, the project was never realized.

His masterpiece
In 2010, Bellerose built what he considers his chef d’oeuvre: a one-story pullet barn that features the latest in energy efficient technology. At the heart of the 260-foot-long barn, which is equipped with solar panels on the roof and a heated floor, is a $100,000 heat recovery system with four large ventilators that Bellerose imported from France in 2014.

Such systems are only now attracting interest in poultry- and hog-rearing circles as an important step towards net-zero energy barns for intensive livestock operations.

“It’s easy to operate, clean and maintain,” Bellerose says about his pioneering system, which he has twinned with a French computer system that calculates the ventilation according to the weight of his birds.

“The system works full-time and adjusts according to the outside temperature, which results in more comfortable conditions,” Bellerose says. “I like to tell people that I’m not ventilating my buildings, I’m ventilating my birds.”

According to Bellerose, the system, which is also connected to his house and a heated machinery garage, has cut conventional fuel consumption by 56 per cent (producing a four-year payback period) and relative humidity in the barn by eight percent.

“Improving the birds’ welfare was always my main focus, but I also knew that I could improve on energy consumption,” he says.

Bellerose is getting equal performance and satisfaction from the $100,000 water treatment system he imported from France in 2018. He said the non-toxic acid disinfectant used in the system saves him $25,000 a year in the cost of chemicals needed to treat water and for cleaning.

“Before investing in things, I first visit farms to see them in action and to talk to producers about the advantages and disadvantages,” Bellerose says. “I don’t follow the crowd. I take the time to learn and listen and then take decisions based on what’s best for my birds and my business.”