And an update on a busy month. 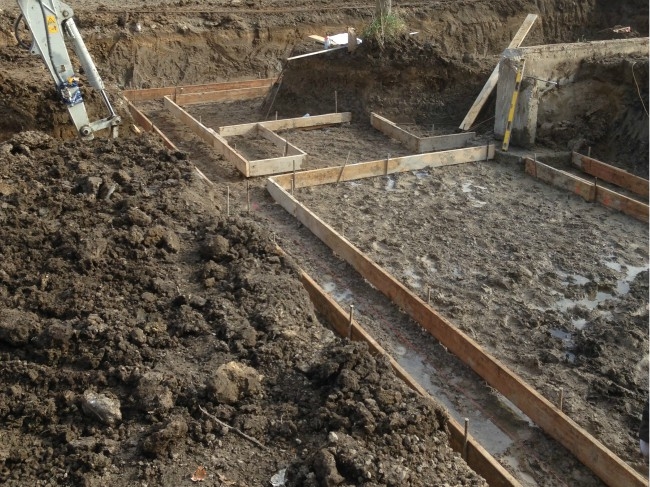 The barn floor had to be prepped for the concrete.

Blog number three follows what turned out to be a very busy November. I knew things were ramping up when I heard my husband Nick tell a salesman that he “wished there were two of him”.

First, I think I should elaborate on why we chose to convert to an enriched colony system. We looked at free-run and free-range, but our gut is telling us that the consumer will still want to purchase the cheapest eggs available in grocery stores.

Our son works at Food Basics and sees the specialty eggs passed over. Actually, they have to be shipped back as they are on the shelf to the expiry date.

As a family, including our children (all of whom are in their twenties), we decided we did not want to work in an environment where our hens would greet us openly upon entering the barn.

We also think an enriched system will give us more control with respect to animal care, our routine and the amount of time we spend in the barn.

In addition, we would probably have to have a bigger barn for free-run or free-range. That being the case, our present building site would have been compromised by size and perhaps would have had to be moved to a different location on the farm.

We decided to stay with Clark Ag Systems partly because they are only a half-hour away. Being nearby has aided in service calls for repairs to our conventional system.

What’s more, the Farmer Automatic system includes many interesting add-ons. I will discuss these more when we are at the housing installation phase of the build.

A busy month
In the last month, concrete work finally began. We built the forms for the concrete walls in the cooler, packing room and front area of the barn in a few days.

The first cement truck came on November 6th. This was exciting and relieved some stress for both of us, as we could see the barn build finally physically taking shape.

We had to bring in loads of stone. Also, the barn floor had to be levelled and packed with a roller to make a smooth floor for the concrete that would be poured on top in the future.

We used the services of Chris Best to haul in stone, move it, roll it and pack it. They also helped with excavating a new electrical line.

In the week of November 20th, three contractors were working on the same day.

Two were doing the concrete walls. Three were moving stone from the dump pile to a dump truck to the back of the barn site, spreading it on the floor and rolling/packing the stone to make a level floor.

And three men from Jorna Construction had started the preliminary work for building the first wall.

Nick is being the general contractor for the barn build project. He was overseeing all aspects, such as making sure the present water line from the deep well to our existing layer barn was buried beneath the floor, doing drawings for fan placement so the builder made the correct size of opening in the side walls and getting anything else that was needed.

In that week, we also had the electricians come and install underground conduit for the electrical service. I think at least 10 truckloads of stone were brought in, and three loads made by the cement truck.

On Wednesday, November 22, the first west framed wall was up, and the size difference of the new barn compared to the present conventionally housed barn is quite impressive.

The opposite east wall was up two days later and we had the weekend to gaze upon all of the week’s efforts.

Saturday, Nick called upon a former worker to help him take down more of the existing pig barn so the carpenter has more working space at the south (far) end.

We are going to hold on to our hats for December, as it looks like we will need good weather to get everything enclosed before winter.

Even with all of this activity, barn chores still must get done. I find myself in the barn alone more, but know it is important for Nick to be present when building work is being done.

I can hear lots of extra banging, vehicles beeping, engines revving and hammering from inside the barn. I do think the chickens are getting used to this!