Clamping down on Campylobacter 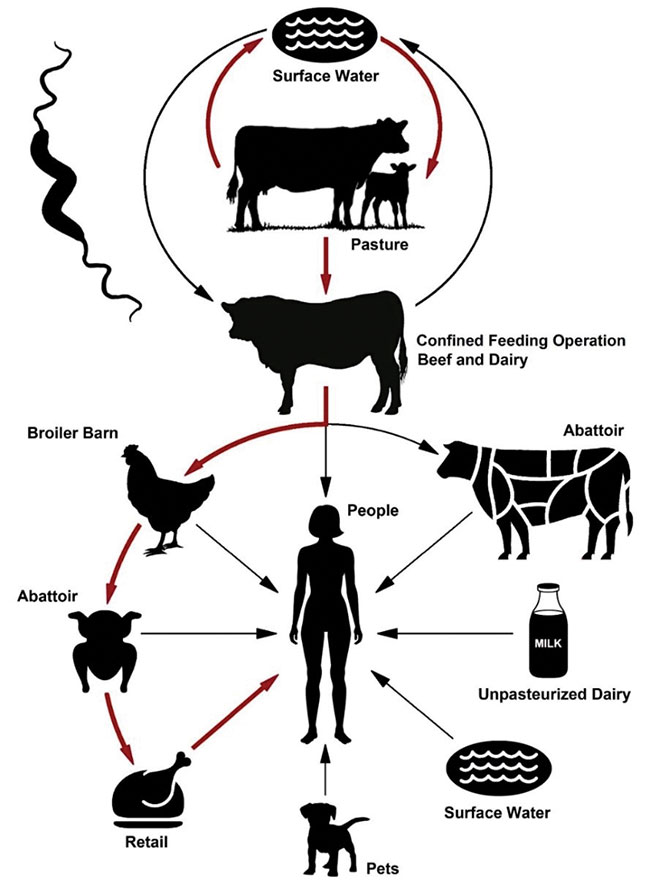 One of the most common foodborne illnesses in Canada is caused by the bacterium, Campylobacter jejuni and chickens are considered to be one reservoir of this pathogen. C. jejuni infections cause campylobacteriosis – a disease that often results in severe gastrointestinal discomfort and diarrhea in people. But there are knowledge gaps that are slowing the development of effective strategies to reduce the risk of C. jejuni.

Dr. Douglas Inglis and his colleagues have been studying C. jejuni for more than 20 years. They’ve discovered a lot about it and are working to fill in the gaps, including the identification of key reservoirs of C. jejuni andhow the pathogen is transmitted to people.

Inglis is an Agriculture and Agri-Food Canada researcher at the Lethbridge Research and Development Centre. He specializes in enteric microbiology and intestinal health andis leading a five-year study to uncover more about high risk strains of C. jejuni, with the goal of using this knowledge to develop effective mitigations for the Canadian poultry industry.

The research team has been taking a closer look at C. jejuni, making new insights and developing diagnostic tools to control the bacterium along the broiler value chain in Canada. “We’re looking to identify critical control points in the broiler production continuum, especially of C. jejuni strains that pose the highest risk to people,” Inglis says.

They have isolated more than 100,000 isolates of C. jejuni from people, livestock, wildlife and water. Working with colleagues at the National Microbiology Laboratory, they have genetically fingerprinted more than 30,000 isolates.

Targeting high risk strains
Strains of C. jejuni are very genetically diverse and previous work that has been looking to reduce the impact of C. jejuni on people has been hampered by a lack of information about the bacterium at a sub-species level, according to Inglis.

“A significant finding of our research is that a relatively small subset of C. jejuni strains associated with chickens represent a food safety risk to people in Canada,” Inglis says. “We have to be able to distinguish high risk strains from low risk strains to detect medically-relevant C. jejuni strains, especially those resistant to important antibiotics.”

To identify different strains, they examined the genomes of a large number of C. jejuni strains recovered from people and from non-human sources (e.g., chickens in barns and abattoirs) using a Genome Wide Association Study (GWAS) approach. This process allowed the team to identify and compare genetic markers present in high risk C. jejuni strains.

Markers were then used as the basis of a new diagnostic tool to identify high risk C. jejuni strains that’s expected to offer new ways to reduce the impact of the bacterium. The tool will ultimately allow the poultry sector to identify transmission routes and critical control points of high-risk strains of C. jejuni where mitigations can be used and evaluated.

Studying an agroecosystem
To gather key information and advance their research, the team used a model agroecosystem. It’s a study location in southwestern Alberta that allowed them to do a deeper dive into the troubling strains, where they are living and moving andhow to best deploy their new diagnostic tool to control C. jejuni.

“We used this location to understand more about how C. jejuni moves from livestock to people because the area naturally includes all the key elements that play a role in the movement of the bacterium,” Inglis explains. The agriculturally-important area contains high densities of chicken, cattle and hog operations. There are high rates of campylobacteriosis in people living in southwestern Alberta. And the region has one public diagnostic facility that provides the researchers with all the isolates of C. jejuni infecting people.

They conducted two large-scale studies within the agroecosystem to better understand the transmission dynamics of C. jejuni. The first study examined how C. jejuni strains were transmitted throughout the broiler production continuum and the second looked at transmission routes of the bacterium to people. One surprising outcome indicated that infections of people by C. jejuni living in southwestern Alberta were often linked to strains associated with cattle.

“The large-scale approach we used helped determine that cattle are the primary reservoir of high-risk strains of C. jejuni that infect broiler chickens,” Inglis says. “What was particularly surprising was that a single cattle-borne strain of C. jejuni was responsible for outbreaks of the bacterium in individual broiler barns and that the diversity of C. jejuni strains originating from cattle increased within the poultry production continuum.”

Using a model agroecosystem proved to be an invaluable approach to address key knowledge gaps and the results from southwestern Alberta are applicable to other locations in Canada. “In this regard, the evidence we obtained implicated dairy and beef cattle as important reservoirs of high risk C. jejuni strains infecting poultry throughout Canada,” Inglis says.

Cattle-to-bird-to-people transmission
The exact mode of transmission of high risk C. jejuni strains from beef cattle to broilers is currently under investigation as part of this research. Preliminary findings indicate that wild birds and arthropods may be involved, but not air (e.g., windborne aerosols), water or rodents. “We expect this information will prove invaluable to disrupting the transmission pathway of C. jejuni from cattle to chickens and greatly reduce the introduction of the bacterium into abattoirs,” Inglis says.

With many important questions answered, the research team continues to strive to learn more about how C. jejuni moves and survives throughout the broiler production system. “In the final year of the project, we’ll use our diagnostic tool to determine how high risk C. jejuni strains are transferred into and survive within abattoirs and develop a risk assessment tool for the poultry sector,” Inglis says. They’ll be using the foundational information they have uncovered to develop and evaluate mitigation strategies, working closely with poultry sector stakeholders.