Adapting to meet the needs of an evolving industry 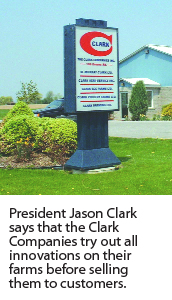 For The Clark Companies the secret of success is straightforward – you do what you do best and get better at it.

“We will stay focused on what we do. We believe you have to be an expert at what you do,” Jason Clark said in an interview with Canadian Poultry Magazine.

What The Clark Companies do is agriculture with an emphasis on poultry. They are the largest broiler producer in Ontario and among the largest broiler producers in the country – supplying McDonald’s Restaurants. They produce 600,000 birds per crop from eight barns. In the past the company owned more farms and more barns but decided to consolidate in new barns to make management more efficient and effective.

They have 140,000 laying hens, own and operate a major hatchery and are a significant producer of turkeys.
On the poultry equipment side, W. Murray Clark is the Canadian distributor for Farmer Automatic.

Its operations used to be confined to just Ontario, but recently bought dealerships in Alberta and Quebec.
“Our market is now Canada, not just Ontario,” he said.

The company also operates in the grain sector selling seed, fertilizer, transportation and elevator services and other inputs in Southern Ontario.

The company is no Johnny come lately, having deep roots in the poultry business and celebrating its 82nd anniversary this spring.

While the family began farming in Oneida Township, in Haldimand County, Ontario in 1869, it tightened its focus in 1925 when an announcement in the local paper said the Clark brothers were selling their dairy cattle by public auction “having decided to specialize in poultry.”

Hugh Clark stayed on the family farm while Fred started a hatchery in the basement of his home.

Fred Clark and his descendents have been involved in poultry and the innovations that drove the industry forward ever since.

Fred was among the first to sort chicks by sex to ensure his customers only got the hens they wanted and taught his children Murray, Jack and Kathleen the technique.

Because egg production was a seasonal thing back then, the Clarks would travel to New Zealand to provide their
services down under during Canada’s off season.

After the Second World War, farmers got electricity and discovered that hens could be tricked into laying year round by lighting programs.

The industry then became more specialized as farmers turned away from dual purpose breeds and to leghorns for egg production and broiler breeds for meat production.

As the industry changed Murray Clark adjusted by turning his attention to supplying farmers with the latest in production equipment.

In 1950 he established W. Murray Clark Limited and by 1957 he was selling poultry equipment full time. In 1966, Murray’s son Ron joined the business and the two worked as partners until 1977 when Murray retired.
The company continued to grow and diversify.

In 1981, the company purchased Martindale Hatchery, which produces more than three million chicks a year. The deal also involved an egg farm now producing more than 40 million eggs a year.

In 1984, Clark bought T.M. Spratt and in 1986 a broiler operation, making the Clark Companies the largest producer of poultry in Canada.

In 1991, Ron’s son Jason began work with the company. Looking for new opportunities Jason created Clark Agri Service by purchasing three farm service companies in the Niagara Peninsula. In 1999, Jason became president of the company and bought the equipment side of the business from his father two years ago.

One unique aspect of the company is that it tries out all the innovations from the farm service side in its own barns before selling them to others.

“It’s a benefit of being in the production side and the equipment side we can do a lot of testing and see what works,” he said.

One example of this is the new dimmable, mini fluorescent light bulbs.

Jason said the new product came after a visit by an energy conservation expert to conduct an energy audit of Clark’s barns. Initially, the company thought the audit would reveal potential savings in big ticket equipment.

But the auditor quickly focused on the light bulbs and told the company that is where huge savings could be realized.

The company then went looking for a dimmable bulb and when it found one it had them installed in its barns. Impressed with the results and the savings Clark Companies signed a distribution agreement and brought the line to Canada, he said.

The company is always looking at acquiring new product lines to meet the needs of its customers, he said.

“Working with end users and asking what they need is the smart way to go,” he said.

To ensure that he can service customers nationwide Jason is now learning French. “If you want to work with
and serve all Canadians you have to speak the language,” he said.

Another current focus is animal housing. Making sure the company is up to the standard called for by its customers has become vital. “It’s what our customers want,” he said.

The company still has its head office just outside Caledonia, south of Hamilton. It has 70 employees, many of whom have been with Clark for decades, not mere years.

Bob Hunsinger, who has been with the company for 35 years, says: “It’s a great place to work, if it wasn’t they
wouldn’t have so many long term employees.” n