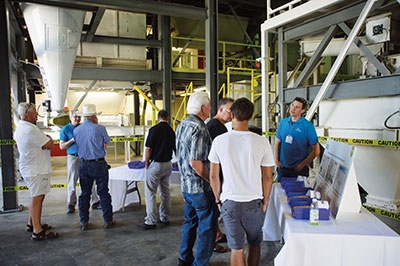 Clearbrook celebrated 60 years with live entertainment, a barbecue and a mill tour.

The 60th anniversary of Clearbrook Grain & Milling in Abbotsford, B.C., took place on July 23, 2013. Clients, suppliers, friends and staff gathered for the afternoon to celebrate the milestone, with activities, a barbecue, live entertainment and prize giveaways, as well as a tour of the mill. The company is also currently working on a tribute book to commemorate the event, which will include contributions from customers, suppliers, staff and more.

Clearbrook Grain & Milling, along with Nature’s Pride Nutrition, Pacific Pride Chicks and Friesen Farms, are part of the Friesen family’s operations. The family-owned and -operated business now extend to the second generation – together with production, finance and administration, the management team includes siblings Richard, Marvin and Melinda Friesen.

John Friesen, grandfather of the siblings, started the family on their poultry industry journey with his first job in Abbotsford as a night watchman at a chick hatchery in the 1930s and ‘40s.

John later helped his son Jake, one of 12 children, purchase some laying hens. In 1953, with a loan from his father, Jake then purchased a vacant farm on Clearbrook Road and began a commercial-sized layer operation.

At the same time, an opportunity opened up for Jake to get involved in a small feed company, delivering bagged poultry feed to local farms. He married Erna, who not only raised their five children but also helped run the farm, doing daily chores and collecting eggs. She also found time to participate in many community organizations and industry associations such as the B.C. Egg Producers.

In 1964, a fire devastated the mill. But resources were pooled and a new plant was built, one that featured a modern design and more central location. The decades that followed were exciting times for the family-owned company, as they diversified into new industries including broiler and turkey hatching egg production.

In the 1990s, the mill (which had been designated only for poultry feed) was expanded to include dairy feed
manufacturing. And in 2007, the Friesens made the decision to purchase another feed mill, which became the company’s designated dairy feed manufacturing facility.

Over the decades, Jake served on many industry boards, and some of his most important work was with the B.C. Egg Producers Association, where he directed efforts to create the B.C. Egg Marketing Board.

“I am proud to say that some of our poultry customers have been committed to our business for over 30 years, due to my dad’s dedication and assistance with getting them involved in the industry,” says Melinda. “Over the years, we’ve expanded from a handful of employees to a multi-operation company with a crew that’s over 125 strong today.”

The separate feed facilities ensure the prevention of cross-contamination and complete consistency. Feed ingredients are tested with an in-house NIR (Near-Infrared Spectroscopy) machine to meet strict specifications and guarantee that only feeds of the highest quality composition are offered.

The Friesen Group believes in supporting the many community foundations that serve the industries in which its companies do business. Sponsorships, donations and bursaries are just a few of the ways that they reinvest within their community and the feed and farming industry.

“As a family, we feel a strong sense of accomplishment in celebrating Clearbrook Grain & Milling’s 60 years in business,” Melinda says. “The experience has truly been an honour. It’s a team effort, and we recognize the contributions, efforts and dedication of each staff and family member to reach this milestone.

“Whether it was through guest attendance at the event or in one of the many personal messages we have received over this past month, we have been overwhelmed by the support from our industry contacts and our community.”