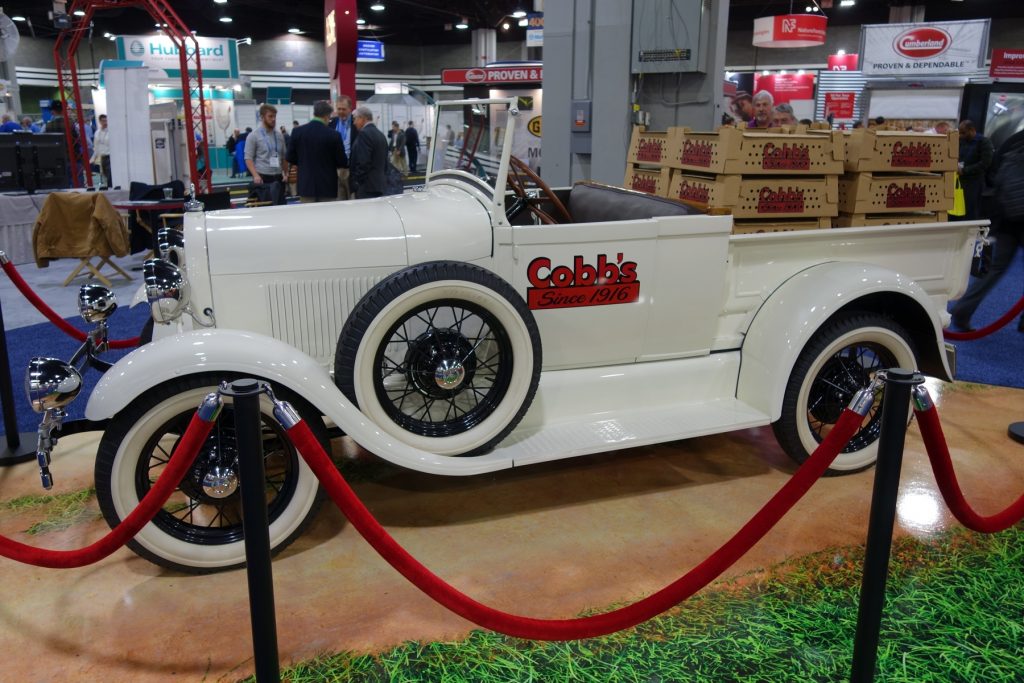 A restored 1929 Ford Model A chick truck, a replica of the vehicle that delivered Cobb chicks to customers in Alabama during the late 1940s and 1950s Cobb-Vantress Inc.

February 24, 2016 – The centennial theme unveiled by Cobb-Vantress at the IPPE in Atlanta, Georgia, last month will be carried forward around the world throughout the year – with emphasis on the importance of relationships in the company’s success.

At the show a new trade booth was unveiled along with a restored 1929 Ford Model A chick truck, a replica of the vehicle that delivered Cobb chicks to customers in Alabama during the late 1940s and 1950s.

One of Cobb’s truck drivers in Kentucky, Max Worley, himself a keen vintage car enthusiast, was commissioned to make an authentic replica of the vehicle that featured prominently in promotions for “Cobb’s Pedigreed Chicks” as the company was known at the time.

“I am very proud of our employees and what they’ve done to make Cobb so successful and such a great place to work,” said Jerry Moye, President of Cobb.  “At the same time, I’m very grateful to all of our great customers and partners that helped us achieve this amazing milestone of 100 years.  It is the relationships we’ve built over a century that keep us moving forward, and the genetic progress year-on-year and the advances in technology that help us prepare to feed the world of tomorrow.”

Roger Vessell, Cobb Director of World Marketing, added:  “With the iconic truck and our new booth we were able to use the event to display our 100th anniversary theme and showcase the proud Cobb history. We are showing our customers — and the whole industry — that we are investing in our future in all aspects of the company.”

The celebrations will continue up to the Eurotier Show in Hannover, Germany, from November 15 to 18 – a few days ahead of the anniversary date of November 20 when Robert C Cobb Sr. purchased Old Pickard Farm in Littleton, Massachusetts, which was to become the home of the Cobb breed for more than 70 years before the move south to the current headquarters in Arkansas.