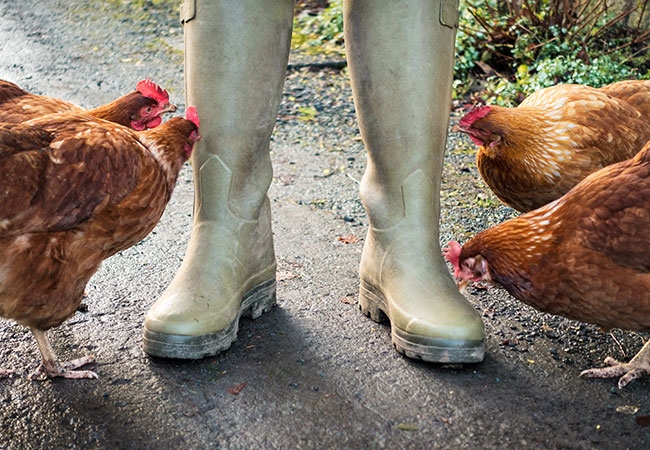 Experts say proper changing of boots should be easy when there are either just clean and dirty zones in the entry, or when there are these zones plus an additional change zone. Photo: Getty Images

It’s well known that livestock diseases can be transmitted by mechanical means – by boots and vehicles. In response to this fact, producers have created barn entry and exit biosecurity protocols. However, many researchers have shown that compliance can be low around the world, and on poultry and swine farms in particular.

For example, among other studies, Dr. Manon Racicot, a veterinary epidemiologist and member of the Risk Assessment Models Development Team of the Food Safety Science Directorate at the Canadian Food Inspection Agency, and Dr. Jean-Pierre Vaillancourt, professor in the Research Group on the Epidemiology of Zoonoses and Public Health at the University of Montreal, and their colleagues have used video surveillance to study barn entrance protocols on poultry farms.

In Quebec several years ago, they found overall compliance occurred only between about a quarter to a third of the time. Vaillancourt has reported that from his own research, that of others and his travels, that this is typical of what occurs around the globe.

Dr. Geneviève Huard, a veterinarian and graduate student under Vaillancourt’s advisement at the University of Montreal, is doing research to support compliance training. She notes that while the training material itself is only one part of the solution, it’s critical for it to be applied. Farm owners and staff must understand that the materials are important. The aim of Huard’s current research is to visually show through bioluminescence (see images below) how actual pathogens are spread in situations where biosecurity protocols are carried out inadequately. This visual information, she says, provides more incentive for staff to ensure compliance is optimal.

She says proper changing of boots should be easy when there is either just clean and dirty zones in the entry, or when there are these zones plus an additional change zone. A three-area entrance does provide some advantages, such as making the distance greater from dirty to clean areas, but Huard says space availability may not allow for it and that design of the area also matters a great deal. “All that being said, and everything else being equal,” she notes, “the odds are likely greater that you will reduce cross-contamination with a three-area versus a two-area design.”

Indeed, Huard notes that lack of space is the big issue for biosecurity compliance in some barn entries, especially old ones. “For old barns, sometimes you just need to think outside of the box to make [good compliance] possible and it is often dependant of the desires and beliefs of the producer,” she says, but adds that “in some cases, barn entries cannot be re-organized.”

Huard says it is difficult to propose a single entrance design, but her work has shown that compliance with protocols can be achieved with any good design. She points to research by Racicot and her colleagues that found benches between clean and dirty zones are much more effective in achieving compliance than delineation with a red line on the floor.

She adds that physical barriers like benches could also prevent organic material and litter from literally flying from the contaminated area to the clean area and vice-versa when the outside door is opened. “Of course, there is also the issue of insects such as darkling beetles,” she says, “that we frequently see in equal concentration in the contaminated and clean areas.”

In addition, Huard notes a good, regular disinfection of the entrance also contributes to reducing pathogen loads, but that the area must be designed in a way that cleaning does not contaminate the clean area (e.g., separate drains for the contaminated and clean areas).

Experts say proper changing of boots should be easy when there are either just clean and dirty zones in the entry, or when there are these zones plus an additional change zone.

OTHER FACTORS
Signs in the barn are also important, and the simpler the better. Huard says, generally speaking, sign messages should be conveyed using images and symbols rather than words, as poultry industry workers may have different levels of English reading skills. Signs should act as reminders, she notes, and must not be relied upon, because people stop noticing signs after a while. Providing frequent feedback and training/reminders is critical.

Staff meetings about biosecurity should focus on issues reported as problematic, in Huard’s view. “You may want to have some key problem addressed in a meeting and not try to cover everything possible,” she says. “Information overload is not useful.” She adds that everyone who enters the barns (employees, owners, owner family members, etc.) should attend the meetings because supervisor behaviours and attitudes are correlated to employee compliance.

“This is a big deal,” she states. “In Canada, we may offer training to growers and poultry technicians, but how about the low-income farm help? It is a mistake to think that they will necessarily get the training on-farm by the grower or a technician. And how about allied industry personnel going to farms?” Huard says there may be some programs in place to handle all this – she’s not sure – but she reports that Vaillancourt and Racicot are planning to study some of these programs and how program success is evaluated.

Regarding employee engagement, Huard says the best approach is to make them partners. “For example, you can have a monthly break or lunch paid for by the farmer where biosecurity issues are brought up and debated, with the goal of coming to an agreement with the staff,” she says. “If they participate, they are much more likely to consider what has been proposed.”

Providing adequate resources is also important. “I’ve been on many farms where the sanitizer was empty, there was no pen to sign the logbook, there were no plastic boots for visitors, etc.,” Huard reports. “Providing the necessary materials to perform the biosecurity protocol is a minimal requirement.”

Huard acknowledges that it’s very challenging for a farmer to gather information about on-farm compliance in order to improve. A few studies have looked at compliance by using video surveillance, and they found that there is a poor correlation between self-reported and observed compliance. Also, bi-monthly audits done by a non-authority figure were ineffective. “Cameras may not be accepted, but there might be ways to make it doable, such as using them not to punish, but as a training tool and to reward compliant employees,” Huard says.

She also suggests that farmers can look indirectly for evidence of the regular application of biosecurity protocols – for example, by frequently assessing entrance cleanliness or counting the number of plastic visitor boots to see if it matches the number of visitors. However, these are after the fact.

Huard notes there are technologies that are being considered that would allow tracking farm boot location, the equivalent to virtual fences where an observation is triggered when boots pass from one area to another. “Much is being developed right now,” she says, “because GPS technology is becoming so cheap and yet precise.”

Barn cleaning biosecurity project
Dr. Michele Guerin, associate professor at Ontario Veterinary College at the University of Guelph, is studying barn cleaning as it relates to biosecurity. Currently, chicken producers in Ontario are required to dry clean their barns after every cycle and disinfect their barns at least once per year, as per the Chicken Farmers of Ontario’s On-Farm Food Safety Assurance Program. “However,” Guerin notes, “science-based evidence is needed to establish best-management practices.” She is now studying how pathogen loads (E. coli, Salmonella spp. and Clostridium perfringens) are affected by sanitation procedures at 36 commercial broiler chicken barns with different flooring types. Each barn was dry cleaned, wet cleaned or disinfected after flock removal using the protocol normally performed by the producer. In addition to flooring type, Guerin is also studying type of disinfectant, water temperature and the presence of pathogen resistance genes. The results will be used by the Ontario broiler industry to update its standards. Still, Guerin notes additional research is needed to develop more comprehensive standards to control the wide array of pathogens that infect poultry.