Compost is not created equal 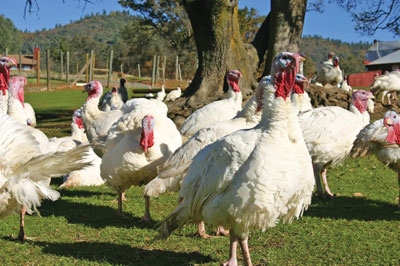 After five minutes with Jason Diestel, you quickly learn there is more to compost than meets the eye.

Jason is the director of sustainability for the Diestel Turkey Ranch, located near Sonora, Calif. His grandfather founded a 50-acre turkey farm in 1949. Customers back then (and now) lined up for the turkeys grown the old-fashioned way and thought they tasted better. The farm continued in that direction. In 1980, Jason’s dad took over and today the 200-plus-acre farm processes 200,000 organic turkeys a year – all grown in the old fashioned way – and sells them to stores throughout the West.

Quality is key for the Diestels, whether it’s turkeys or compost. “My great uncle Ernest taught my grandpa about the concept of quality – not rushing the process and allowing time to develop the highest quality possible,” says Jason.

Senior project and compost
When the Diestels started processing in the 1980, everything could be taken to a rendering plant, but today the State of California won’t take the feathers. With 200,000 turkeys, that’s a lot of feathers. Jason says there’s also no market for them. “The only option in California is to take it to a landfill.”

By the time Jason was in college at Cal Poly in the 1990s, applying raw manure had also become more regulated. When it came time to choose a senior project, Jason wanted to find a way to turn their byproducts into something productive.

“I started looking for something that made sense to me,” says Jason. “I started going to U.S. Composting Council and BioCycle and other areas and I heard the same thing over and over: “Compost is great stuff. Put it in a pile, turn it a few times, it turns black. Compost is compost.”

This didn’t make sense to Jason. “We have successfully differentiated ourselves for [more than] 60 years in the turkey business and you’re telling me that all compost is created equal? There had to be more to it.”

Jason’s search led him to Midwest Bio Systems, a company out of Illinois that focused on creating compost from the plant’s perspective – on humus-based soil fertility, which is the practice of building long chain polymer carbons in a very efficient 10-week composting process.” And, Jason says, corn and soybean farmers who were paying $120 per ton for humus compost and outperforming other soil fertility practices with better yields and lower input costs.

“That really caught my eye, not only from a profitability standpoint, but also if they were selling a product of such high value, it has to work or they’d be out of business.” And it was this realization that led Jason to take a year away from the farm to work for MBS, to explore soil fertility, and learn what he needed to do at the farm to make the system work.

Breaking down feathers
Back at the Diestel Farm, the challenge was composting 12-inch turkey feathers, which refused to break down. “We tried doing it with a loader bucket and we weren’t able to keep the moisture,” says Jason. “The other problem was, we had no way of releasing carbon dioxide and weren’t getting the breakdown process needed.” The answer turned out to be an Aeromaster Compost Turner from Midwest Biosystems.

“The Aeromaster Compost Turner is extremely efficient,” says Jason. “It removes carbon dioxide and applies water at the same time and does a great job of aerating. The tines spin slow enough that it’s not pulverizing the product and that allows for the humus chains to be built. It also doesn’t take a lot of horsepower to get through the rows. It flips the material backwards and allows CO2, which is heavier than air, to release from the bottom of the row.”

After the Diestels started using the turner, they were able to adjust their water application and keep it consistently at the necessary 45 to 50 percent. “If you can keep a consistent moisture throughout and not just the first few inches of the row, you can really break down some organic matter,” says Jason. “And after you break down the organic matter, you can start building up humus.”

High-quality compost
As with the turkeys, Jason and his family focus on quality compost. Their goal is to make the highest quality possible. To do so, they also use windrow covers. It’s a little more labor, but saves some water and a couple of turns by keeping the environment stable.

Jason says they also have the luxury of having extremely good quality control over what enters their compost.

With the addition of humus soil fertility technology, Jason feels there is a big opportunity to increase soil organic matter by percentage points in as few as three years, balance mineral ratios, increase nutrient availability and improve soil structure.
“All this can be done with fewer truckloads of compost over more acres of farm land,” says Jason. “Now that is sustainable when you consider that most of the cost of manure or compost is typically in the transportation.

“By changing, or optimizing, the soil structure, we’re optimizing the biological balance from a fertility perspective and that’s also allowing the nutrients to cycle more efficiently,” explains Jason. “You can’t sustain good biology in the soil unless you have a good soil structure. By utilizing the humus technology, we’re addressing all that.

Jason believes soon farmers will see that they are losing a lot of fertility value in manure by not converting it into something more stable like humus compost. And they can take care of odor issues at the same time.

“Typically, I want to see my nitrate be much higher in my finished compost than my NH4, which is ammonia. That tells me that we’re on the right track for making a quality product and that’s essentially stabilizing nitrogen rather than nitrogen attaching to hydrogen. We want to attach it to oxygen and that stabilizes it, but then also the next step of that is to buffer it with humic acid — the long-chain polymer carbon of humus — which will hold that nitrogen in the soil stable where it’s not going to leach and won’t volatilize into the air.”

In short, with this process Jason is able to keep 96 percent of the nutrients in the root zone, whereas with manure 60 percent of nutrients are leached or escape as odor.

The process
The 10-week process is straightforward. First, manure, feathers and some brown material (ground wood) are combined. During the next two weeks they turn the row every day, except Sunday. The following weeks they reduce the number of turns with a total of 20 to 30 turns during the life cycle of the row.

“We decide whether we’re going to turn a row based on the temperature, CO2 and moisture,” says Jason. “We have critical control limits on each of those areas and if they fall out of the limit, then basically there’s a problem that needs to be addressed.”

Two employees work full time on the compost. They use a digital temperature probe as well as a standard dial temperature probe to track the temperature. They also use a carbon dioxide meter, but haven’t found a good moisture meter yet and test by hand. If it feels like a sponge, but you can’t get a drop of water out of it, it’s at about 45 percent moisture.

All the manure and the feathers from the processing come to the centrally located, 15-acre composting site. Fall and spring are normally the busier time, but the Diestels compost year round. The final product is OMRI listed and the company is also a U.S. Composting Council’s Seal of Testing Assurance (SAT) member.

Selling the product
The farm uses a small portion of the compost on its pastures, but the majority is sold.

“We deliver small quantities and we work with other guys to haul it,” says Jason. “We’ve had a lot of success in the gardens, backyard farming, and with community supported agriculture (CSA) farmers. Also large commercial nurseries are including it in their blend because they’re seeing some noticeable benefit.

Getting those first sales wasn’t easy though.

When I first started going out, nobody had heard of me, the product or what we were doing. I just kept lining up all these contacts and saying, “Hey, I’m still here, and I’ve got stuff that works.”

“It was about a year before I sold them some product,” says Jason. “Fortunately, I was young and I didn’t really know what it meant to get a product off the ground.”

“We actually got a little business out of that,” says Jason. “They saw that it was different and it changed the soil in a better way than manure did.”

Staying focused
Quality compost requires a diligent site manager who is going to make the critical calls every single day. It also requires investing in the right equipment. “The efficiency gained by being able to handle material efficiently is well worth it and we went along for a while trying to avoid that reality,” says Jason.

Jason expects it won’t be long before people see how compost can make a big difference and become more willing to make the investment in our soil.

“The most rewarding thing I’ve ever experienced was seeing this concept working – one that 99 percent of folks have no idea is out there. It’s an incredible technology.

“I think that in our culture, we have a very mechanical view of the world. If the wheel bearing goes out on your car, you can wait a year or two years. It’s still going to be broken; it’s a mechanical organism. Our farms and our manure and our composting systems aren’t mechanical organisms – they’re biological organisms, which means that they are self healing when the right conditions are available. Farmers understand this process. It’s exciting to have people come back to me who are using the compost and have them say: “I reduced my water usage by 25 percent and I doubled my yield!”