Managing deadstock is an increasing conundrum for farmers. Factors such
as cost, biosecurity, odour and animal pests must be considered in
whether to use burial, open-pile composting, incineration or a
deadstock removal service. 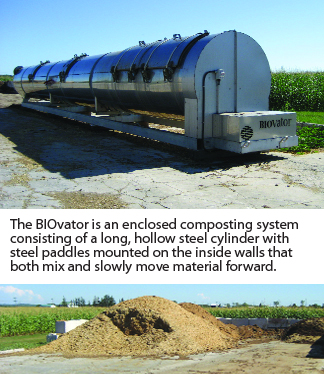 Managing deadstock is an increasing conundrum for farmers. Factors such as cost, biosecurity, odour and animal pests must be considered in whether to use burial, open-pile composting, incineration or a deadstock removal service. However, in mid-2005, New-Life Mills Limited – a large turkey producer in Hanover, Ont. – decided to forgo all these options and purchase a BIOvator. They have never looked back.

Simply put, the BIOvator is an enclosed composting system consisting of a long, hollow steel cylinder with steel paddles mounted on the inside walls which both mix and slowly move material forward using power from a one-horsepower electrical motor. Deadstock, along with carbon-rich material such as spent litter, straw or wood shavings, is placed in one end in the correct proportions, and compost is taken out the other end.

The technology was developed by Dr. Shokry Rashwan, an engineer at Puratone Corporation, a producer of pork, poultry, animal feed and agricultural technology based in Niverville, Man. “There were problems with existing composting and other disposal methods,” Rashwan says. “We did a feasibility study of a composter, then hypothesized and built a prototype. Commercialization was not a goal from the start, but when we shared it with other producers and saw that we could go public.” He adds “Because we are hog producers and we developed a technology to solve one of our problems and we tested it etc., that gives us credibility.”

Puratone has sold 48 units in Canada and 58 in the U.S. so far, all to hog facilities, except for New-Life Mills and one purchased this summer by brothers in Ontario who own adjacent dairy and pig farms. New-Life purchased the largest model, which is 42 feet long and designed to handle 500 pounds of deadstock per day, at a cost of about $45,000. The medium-sized model is 30 feet long, $35 000 and takes 350 pounds per day, and the smallest is 18 feet long, $28 000, and takes 175 pounds.

Bill Revington, general manager of Farm Operations for New-Life, says “Years ago we took [deadstock] to the back of the farm and buried it. This was accepted practice but obviously is no longer appropriate. From there, we had a renderer come in periodically and pick the material up.” Revington says the use of a disposal service as a primary solution has become impractical for several reasons. “They used to pay for material, but now they charge for that service. Also, we had to have several large chest freezers in place at each farm to store the material. And, you have a truck pulling into your driveway with contents of unknown origin that could pose a biosecurity risk.”

In searching for alternatives, New-Life considered incineration, but deemed it too costly in terms of the capital equipment and ongoing energy use, although Revington says they do consider it “the best from the standpoint of biosecurity.” He notes they also examined other composting systems, but “When using compartments that need to be stirred with a front-end loader, there is much higher ‘grossness’ factor and possible smell. Also, we were told that it was very time-consuming for personnel.”

Revington says they chose the BIOvator as it provides “on-site control of the material and since we are avoiding pick-up charges and minimizing freezer use, there is a payback to the unit.” He says “At the farms currently involved, we were spending over $16,000 per year in renderer pick-up charges, and we were running two to four large chest freezers at each site, year-round.” With the lone BIOvator, there is still some remaining freezer use and occasional pick-up by the renderer; it also requires part of one employee’s time for collection and delivery of the material from four sites. However, Revington says overall, “We know there’s a payback, but we also think we can refine our system further in order to reduce the number of freezers and reduce the renderer charges even more.”

This refining includes a plan to look at purchasing more BIOvators. “We could include more farms in the network and gain some ‘economies of scale,’ “ Revington says. “For larger operations, I think this is a very viable alternative since the costs to incinerate and render are only going to increase. We’re going to have the substrate available anyway. Spread out over a couple of years and given the current environmental challenges we face with nutrient management, I think the costs of the BIOvator are manageable.”

Revington says the BIOvator also makes sense because New-Life had a readily available source of carbon substrate required for BIOvator operation in the form of brooder barn manure, which contains lots of shavings. Revington says “We tried some other materials in the initial stages, notably shorts  when they were really cheap. They would work fine, but they required the addition of water to balance the mix and so it was a bit trickier to keep the process running. We have a lot of paper waste from brooding turkeys and we are thinking of shredding it and seeing if it would make a suitable substrate.” He adds “Composting is a bit of an art, but with the BIOvator, once you get a sense of how much of each material to put in, it’s very easy to keep it running properly. A few minutes a day to charge it up is all it takes.”

Revington also likes the BIOvator because “the material is out of site and out of the way of raccoons, skunks, birds and other pests.” He adds “The important thing about the BIOvator process is that because it is aerobic, the smell is greatly reduced.” Having said that, he observes, “There is a little more odour than we originally anticipated…but we load the unit pretty heavily.”

John Kloeze, president of Actium Resources Ltd. in Goderich (the Ontario BIOvator distributor), points to other BIOvator benefits in comparison to open-pile composting, including much faster composting year-round with zero leachate, and a compost free of E. coli, Salmonella and other pathogens. When asked about biosecurity, Revington says “We’re bringing material in from several different locations, it’s true. But these are our locations and we know what the issues are. We have control over the vehicle and how it’s cleaned, etc.” He notes “We monitor the temperatures using an external probe and we can easily attain 135º to 145º F (57º to 63º C) even on the coldest winter days. With retention time between 28 and 42 days, this is ample for pathogen elimination. This has really solved a problem for us; mortality is automatically part of our Nutrient Management Plan and does not have to be accounted for separately.”

In terms of use for the compost, Revington says it is currently pushed into a pile with the manure and spread regularly. “We never intended to market the compost,” he notes, adding that compared to the manure generated, the volume of compost is trivial, with a 10-to-one reduction of what goes in versus what comes out of the BIOvator. He says that although what comes out of the unit is technically compost, it “would not be the most conducive for, say, nursery application without further processing…[because] there are some coarse bones and a few fat balls, although remarkably, feathers are almost non-existent.” Revington concludes “I’m not sure that the value-added and the volumes generated are sufficient to make compost sales viable. Our primary goal was disposal of on-farm mortality.” n