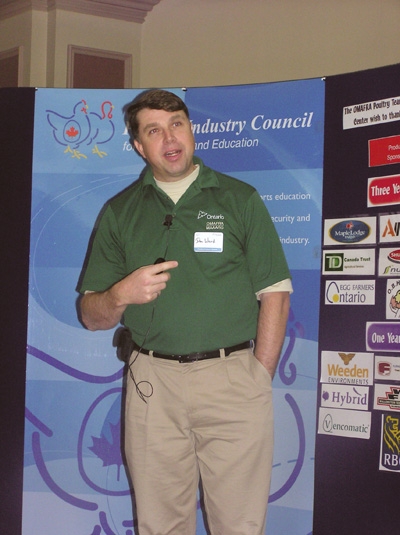 OMAFRA engineer Dan Ward says there are three basic approaches to fly control: barn and site management, biological controls and chemical control. These can be used alone or in combination.

Controlling flies in and around poultry barns can be a challenge, but if the flies aren’t controlled the farmer may face an even bigger concern – government officials buzzing around the barn.

Daniel Ward, an engineer with Ontario’s Ministry of Agriculture, Food and Rural Affairs (OMAFRA), told 120 farmers gathered for a producer update in London, Ont., that legislation protects farmers from nuisance complaints so long as they are following “normal farm practice.”

Flies are one of the seven nuisances listed under the Farming and Food Production Protection Act (FFPPA) and Nuisance Complaints. The others are: noise, odour, dust, light, vibration and smoke.

A normal farm practice is defined as that which is consistent with proper, acceptable customs and standards of similar operations or uses innovative technologies according to proper advanced farm management practices.

Complaints usually come from neighbours, and OMAFRA staff will investigate by talking to the farmer and the neighbours. The officials will try to mediate the dispute and 98 per cent of cases are resolved through mediation with agricultural engineers of environmental specialists.

If mediation fails the case can go to the Normal Farm Practices Review Board for a hearing. “Hearings are a last resort as they are time consuming and often result in a winner/loser, which can make for difficult neighbourhood relationships,” said Ward.

The board, which is a quasi-judicial body, will decide if the farm practice from which the dispute arose is normal, not normal and must stop, or can be normal if specific conditions are met.

But for a complaint to get that far is very rare.

Fly Problems
To deal with flies the key thing is to “know the enemy,” by understanding the fly life cycle and the ideal environment they seek, he said.

Flies seek moist, dark areas to lay their eggs and the eggs must remain moist to hatch. Although they will lay eggs in areas with moisture between 20 and 80 per cent, 60 to 80 percent moisture is their ideal.

Flies also like it warm and with ideal moisture and warm summer temperatures they can reach the pupae stage in five to seven days and mature is less than two weeks. In the most favourable conditions it can take “10 to 14 days egg to egg,” he said. In cooler temperatures the cycle can take up to 30 days.

Fly larvae require a nutrient-rich environment such as rotting vegetation, garbage, spilled feed or manure, which is why flies lay their eggs in those areas.

And a small fly problem can explode almost overnight if it is not dealt with immediately. A single adult fly will lay an average of 500 eggs in its short life and there can be as many as 10 generations of flies in a year. The arithmetic is frightening. In the unlikely event all survive generation to generation, one fly lays 500 eggs, so if they all survive those 500 flies would become 250,000 and the 250,000 would become 125 million.

Even in the real world where most don’t survive it can easily become a big problem that must be controlled.

To deal with flies Ward said there are three basic approaches: barn and sitemanagement, biological controls and chemical control. These can be used alone or in combination, he said.

But no matter the approach the key is to break the fly cycle because “adult flies only represent a quarter of the problem.” “Even if you kill all the adults there are more flies coming,” he said.

BARN MANAGEMENT
Barn management sounds like the simplest solution but it takes a lot of time, he said. It involves: eliminating water leaks; increasing ventilation rates to ensure the manure and litter are too dry for eggs or larvae to survive; cleaning up feed spills and water leaks immediately; regularly mowing vegetation around the barns; cleaning up spilled manure; and keeping dead stock disposal sites operating properly and clean.

The bottom line is that barn management involves more work walking the barn and dealing with wet litter, extra bedding to dry up wet spots and a higher ventilation rate (extra electricity) to dry the barn.

WASPS AND MORE
Biological control is an option that uses the fly’s natural enemies to control the population. The most common biological controls are parasitic wasps and a fungus.

The advantage of biological controls is the flies are unlikely to develop resistance.

But “you need to know where and when to use these products to achieve the best fly control results.”

“You need to plan ahead, they’re not a quick kill,” he said. In effect, you need to put the biological controls in place when you think a problem is coming, not after it has arrived.

The wasps are not what most people think of as wasps. They are tiny – about the size of a fruit fly.

The wasps do their work before flies reach the adult stage. When the flies begin the process of changing over from larvae to a pupae the wasp stings and deposits her eggs inside fly pupae. These eggs begin to grow and feed on the developing fly, stopping it from hatching.

The wasps have produced good results, but he repeated that they work best if you anticipate the potential for a fly problem.

The Beauveria bassiana fungus has a spore that attaches itself to the adult fly or fly larvae. The spore has a feeding tube that goes into the fly or larvae. It does not, however, work on pupae because the outer shell is too hard.

Using either the wasps or the fungus involves paying for the products, labour to walk the barn and distribute the product (in the case of wasps) or multiple spray applications during growout for the fungus.

Wasps are also perishable with a limited shelf life. In effect, you should order as needed, he said.

CHEMICAL PROBLEMS
“These are knockdown products,” he said. They will kill adult flies on contact. Most offer some residual effect and will be viable for up to 30 days. In effect the chemical will land on a surface and if the fly lands on that surface it will pick up the chemical and die.

But none of the products can be used in barns as an aerosol when birds are present. “Their use is limited to fogging the barn before cleanout to gain control of a bad situation or surface application in a barn after cleanout and disinfection and before introduction of the birds,” he said.

If you plan to use a chemical control, read the label, because you need to use the correct rate. You should also rotate between active ingredients. Both of these actions are necessary to reduce the danger of flies developing resistance to the products.

Another option is a combination of bait stations and traps. These tend to be low cost, but involve lots of labour to replenish baits or traps, he said.