When asked by poultry producers how they can prevent their barns from
developing a rodent problem, pest consultant Dr. Robert Corrigan gives
a simple answer: don’t let it happen in the first place. 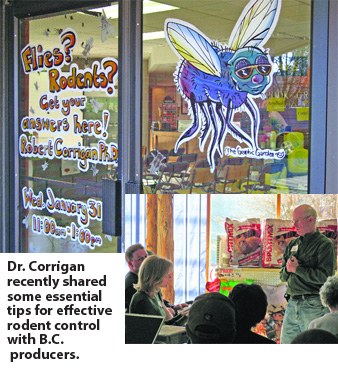 When asked by poultry producers how they can prevent their barns from developing a rodent problem, pest consultant Dr. Robert Corrigan gives a simple answer: don’t let it happen in the first place.

At Clearbrook Grain and Milling’s 10th annual pest control party, held at its Animal Health Store in Abbotsford, B.C., the expert told more than 30 egg and hatching egg producers that getting rid of rodents in a poultry operation is about more than just using something new or stronger – it’s about knowing how to use a product strategically.

“If you don’t put catch-traps or bait where the rodents are, it doesn’t matter what bait you use, it will do nothing for you,” he said.

Surveillance Key
Corrigan said that preventing a rodent problem is actually simple – it’s a matter of surveying the barn with an eye focused just on rodents.  He feels that producers need to change their mindset and perform active surveillance.

For example, rather than looking for evidence of rodents in a passive manner (such as seeing one scurry across the floor while in the barn fixing a leaky water line), try to reserve an hour each week to focus on nothing but rodent inspection, he said.  This includes walking inside and outside the barn looking for evidence of burrows or excrement, as well as checking traps and bait stations.  He recommends making a simple checklist and performing these tasks on a regular basis.

If you notice a “high-traffic area” – one with a large amount of excrement, Corrigan recommends placing extra traps or baits within close proximity to this area.

“The biggest mistake barn managers make is assuming that rodents will travel to bait stations,” he said.  “You have to bring the bait to where they are.”

He said that rodents have no reason to travel to bait stations. It doesn’t matter how good your bait is, rodents won’t smell it or seek it out if it’s too far away, he said.

Although the typical “home” range of a house mouse is between 10-30 meters, this distance has been recorded as short as one metre in a poultry barn – the shortest distance on record. Why?  Because in a poultry barn, the mouse has  only to travel a small distance to achieve its two most important objectives – warmth and food.

Rodents have poor eyesight and thus rely on their whiskers for navigation, he said.  This makes walls, edges and corners of buildings ideal locations for bait stations.  He recommends choosing bait and trap locations based on lines, heat, leaks, and access to poultry feed.  He said to respect specific guidelines for distances between bait stations  (such as HACCP or OFFSP regulations) but that maximizing distribution of stations in high-traffic areas will yield the best results.

Sanitation
You’re less likely to find a high-traffic rodent area if you follow good sanitary habits. Reducing the amount of harbourage and garbage, repairing leaks and cleaning up spills around poultry facilities is essential, he said.

“Sanitation is pest control,” said Corrigan.  “It is nearly impossible to implement a successful pest control strategy without adequate clean-up.”

Products Not the Problem
Unlike problems experienced in the past with Warfarin, Corrigan said that today’s baits and traps are extremely effective and well researched, and that there is no scientific evidence to show that rodents are becoming resistant.

“Bait failure is perceived,” he said.  “Don’t be so quick to blame the bait.”

He is confident that we have the best tools to catch troublesome critters. Their efficacy depends on strategic placement and determining which one that the rodents in a barn prefer.  Finding the right one may take a bit of trial and error, but the biggest reason that much of the bait is left unconsumed is poor location.

Not a Seasonal Problem
Corrigan noted that due to global warming, rodent populations are on the rise.  Although there is no hard data showing direct evidence between increased temperatures and rodent populations, he spends enough time monitoring rodents to have noticed a significant change.

“Without a doubt, on a global scale, there has been an intense increase in rodent problems,” he said.

He said the seasonal checks and balances no longer seem to exist.  Without cold winters to kill them off, rodent populations are no longer cyclic, and are becoming a year-round problem. n