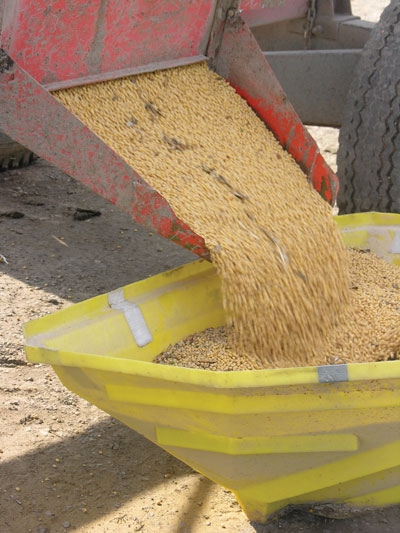 Although there have been high feed costs before, things are much different this time around. Government ethanol policy has significantly changed market forces by increasing and subsidizing demand.

Increasing Feed Costs
Over the past five decades broiler production has decreased on an annual basis only three times: two years in the mid-’70s and again in 2009. “That strong track record of growth is in very serious jeopardy because an overabundance of corn is being diverted to fuel production and thus squeezing out corn that should be available for feed,” he told the committee.

In 2010 over 36 million tons or about 1.3 billion bushels of corn or corn products were mixed into the finished feed. The average cost of chicken feed before the corn price began to rapidly escalate in mid-October 2006 was $139.20 per ton. In May 2011 the same ton of feed cost over $300 per ton, more than doubling the cost since the second Renewable Fuels Standard became mandatory. Last year the chicken industry’s feed bill was almost $13 billion compared with total feed costs in 2006 of less than $7 billion. On a cumulative basis with the higher feed costs, the chicken industry has had to pay over $23 billion more for feed since October 2006. If the ballooning feed costs for turkey production and table egg production are added, the increased cumulative feed bill for poultry and eggs is now approaching $30 billion.

Although no farm-raised animal is a better converter of feed to food than chicken, even very efficient feed conversion cannot mitigate the high corn prices and the significant impact on the cost of producing chicken, he told the committee.

It also appears there will be further escalation in the corn price to allocate the tightening supply of corn. “The market fundamentals imply even higher feed costs for the rest of this year and beyond,” he said.

“Broiler companies until recently have tried to weather the storm of very high, very volatile corn prices. But, now, companies can no longer withstand the storm,” he said.

Companies are trimming their production plans, which means growers will receive fewer chicks to grow and processing plant work shifts are being reduced or even eliminated. A broiler company in Georgia announced 300 workers will no longer be needed and a fourth-generation family broiler company in Delaware has filed for bankruptcy protection.

“A number of companies are trying to continue to operate on very thin financial ice,” he said.

Future Different From the Past
Although there have been high feed costs before, things are much different this time around.  “The situation is not only supply driven but also demand driven. U.S. animal agriculture has not been here before,” he said.

Government ethanol policy has significantly changed market forces by increasing and subsidizing demand, and is a new dynamic. Corn used for ethanol for the 2005/06-crop year was 1.6 billion bushels, or 14 per cent of total usage. For 2011/12 the United States Department of Agriculture (USDA) is estimating over five billion bushels or more than 38 per cent of this fall’s U.S. estimated corn harvest, will go to ethanol. The USDA also recently released a projection that corn for ethanol will exceed corn fed to livestock for the first time ever in the 12 months ending Aug. 31.

It is also expected that international demand for U.S. corn will increasingly be driven by China, which is poised to become a large net importer of corn on a consistent going-forward basis. “If and when this development occurs, there will not be enough corn at reasonable prices to supply both domestic and foreign demand,” he said.

International demand for U.S. corn also is being abetted by the drop in the value of the U.S. dollar versus other currencies. This makes U.S. corn comparatively less expensive for overseas buyers than for U.S. companies.

While anticipated increased foreign demand is not yet fully realized and government-mandated ethanol demand is continuing to rise, U.S. corn supplies are already strained. “There is no cushion, no extra bushels in inventory to carry the needs of the users of corn through the next crop year in the event of a shortfall in this fall’s corn harvest,” he said.

Ethanol Debacle
“It has become more and more clear that the national policy regarding corn-based ethanol has been heavily tilted toward using corn for fuel rather than for food/feed. The need to rebalance the policy is long overdue. Picking one market for corn to be the winner at the expense of the loser should not be the function of government. Mandating the use of ethanol, subsidizing its cost, and protecting ethanol from competition is triple overkill,” he said.

The consequences of moving too far too fast with corn-based ethanol have become evident. The chicken industry and other animal agriculture producers have curtailed production and will continue to scale back in the foreseeable future. As a result, those consumers, who can afford it, will pay higher food prices. And consumers who do not have an adequate income and cannot continue to afford animal protein in their diets will have to shift to other foods, and in some cases, no food, he said.
It is also highly unlikely the current shortfall will be a one-year problem. Corn supplies are tight even with large crops and any weather-related reduction in production will have major consequences.

The U.S. government must develop a plan that restrains the ethanol industry’s demand for corn when supplies are limited. The ethanol industry has been subsidized for more than 30 years and has a large guaranteed market through the biofuel mandate set by the Energy Independence and Security Act (EISA) of 2007. Fuel blenders are required to use 12.6 billion gallons of corn-derived ethanol in motor fuel this year and 15 billion gallons by the year 2015. Yet, all this ethanol is doing little to improve U.S. energy security, which is what Congress intended to do with the 2007 Energy Act, he said.

Ethanol made from corn is the only product that receives government subsidies, has a mandate for usage, and is protected from foreign competition. “Enough is enough,” he said.

Harrison Poultry, the Georgia-based company headed by Welch, has about 1,000 employees and contracts with over 125 family farmers who grow broilers for the company. An additional 40 farmers produce hatching eggs for the company-owned hatchery. Each week Harrison Poultry processes more than six million pounds of broilers on a live-weight basis. The National Chicken Council, of which Welch is a past chairman, represents companies that produce and process more than 95 per cent of the broilers produced and processed in the United States.