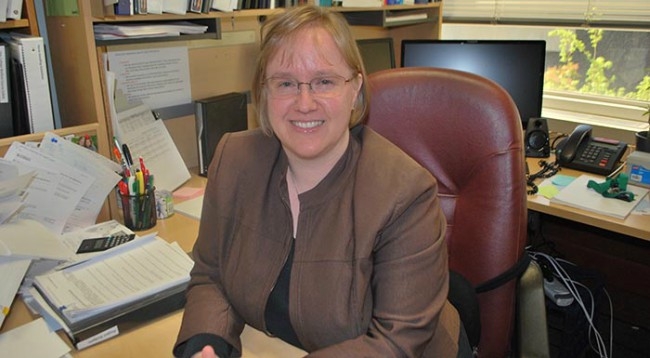 Footpad dermatitis (FPD) in broiler chickens is characterized by ulcerated lesions on the underside of the foot, and is associated with poor litter conditions – typically characterized by high moisture and ammonia levels. Broiler FPD presents itself within the first two weeks of age and increases in severity as bird body weight and footpad (FP) contact with litter increases.

Severe lesions are associated with inflammation and pain, thus making FPD a welfare concern. Literature estimates 11 to 82 per cent of broilers have varying forms of FPD, with FP quality decreasing during winter months as barn moisture levels increase. This is of particular concern in cold weather climates such as those experienced in Alberta and across much of Canada.

Most studies investigating FP quality have concentrated on the impacts of stocking density. These studies have been performed in countries that differ climatically from that of Canada, particularly that of the Canadian Prairies. In addition, litter materials used in these studies differ from those that are practically available in Alberta.

As both climate and litter materials are potential factors that contribute to higher litter moisture levels, there is a need to evaluate poultry litter and flooring materials used within the Prairies climate to determine whether there are strategies that can be employed to improve FP quality in Alberta’s broiler barns.

The approach
Dr. Clover Bench from the University of Alberta aimed to determine on-farm management practices that influence FP quality. Eight commercial broiler producers, representative of geographical regions throughout the Alberta broiler industry, were invited to participate in this project. Producers were chosen based on their history of FP dermatitis prevalence with both high and low FPD prevalence represented amongst the producers.

The findings
Management practices, such as ventilation, barn age, lighting system and intensity, were not associated with significant differences in FP dermatitis prevalence. Additionally, no significant differences in prevalence of FPD between winter and summer months were observed in the current study. However, other factors in the summer may not have been accounted for in the survey such as misting, which may have resulted in wet litter conditions similar to that which is experienced in the winter. Survey results showed that the majority of Alberta’s broiler flocks are reared on wheat straw, as it is locally available and can be grown on-farm at a low cost. However, a correlation was found between the use of wheat straw bedding and FPD prevalence on-farm. Additionally, litter depth was correlated with FPD on-farm.

The next steps
Bench and her research colleagues plan to continue their research and specifically focus on the effects of litter materials, flooring types and litter management on the prevalence of FPD within the Canadian climate. In addition to this, she has recently been focusing her research on investigating genomic markers (SNPs) associated with FPD, to better understand the complex interplay between management practices on farm and broiler genetics.

This research is funded by CPRC/AAFC under the Poultry Science Cluster Program, Alberta Chicken Producers and Lillydale Inc.

CPRC, its board of directors and member organizations are committed to supporting and enhancing Canada’s poultry sector through research and related activities. For more details on these or any other CPRC activities, please contact The Canadian Poultry Research Council, 350 Sparks Street, Suite 1007, Ottawa, Ontario, K1R 7S8, phone: 613-566-5916, fax: 613-241-5999, email: info@cp-rc.ca or visit us at www.cp-rc.ca.

The membership of the CPRC consists of Chicken Farmers of Canada, Canadian Hatching Egg Producers, Turkey Farmers of Canada, Egg Farmers of Canada and the Canadian Poultry and Egg Processors’ Council. CPRC’s mission is to address its members’ needs through dynamic leadership in the creation and implementation of programs for poultry research in Canada.