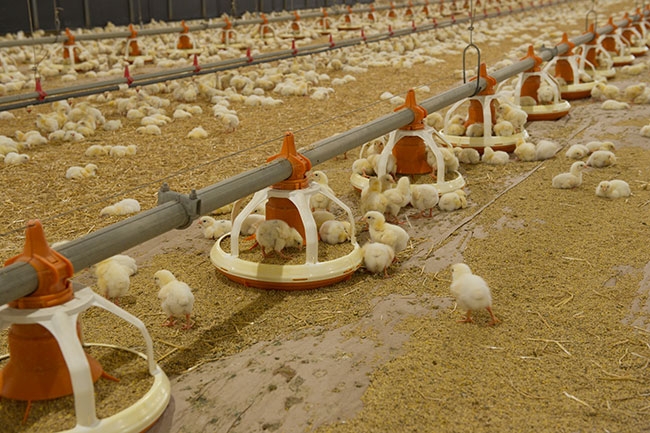 The level of early chick mortality (ECM) is one of the crucial factors that determines the quality of chicken production and, hence, the economic return from a poultry production unit. Yolk sac infection (YSI) has been reported as the most frequent cause of ECM, and in recent years significant increase in ECM due to YSI has emerged as a threat to broiler operations in parts of Canada.

Poor chick quality manifested by YSI leads to increased mortality during the first two weeks post-hatch as well as retarded growth and poor carcass quality of surviving birds. Bacterial infection of the yolk sac leads to deterioration and decomposition of yolk, depriving chicks of nutrients and maternal antibodies increasing the risk of subsequent infections.

The origin of YSI may be traced back to microbial contamination of eggs acquired from the parents or due to faulty management practices at breeder farms and hatcheries. Microbiologically, E.coli is the most common pathogen isolated, although other bacterial pathogens have been detected in cases of YSI.

The problem and approach
Currently, heavy culling or in-ovo and post hatch administration of antibiotics is practiced to control bacterial infections, including YSI. However, non-antibiotic-based alternatives are being sought. Numerous studies have shown that immune stimulants have antimicrobial and growth promoting activities comparable to antibiotics. Correspondingly, other studies suggest that enhanced level of innate immunity in young chicks is associated with reduced initial mortalities, improved resistance to pathogens, increased responsiveness to vaccines and higher levels of production. Thus, use of such innate immune stimulants offers an alternative generic approach for growth promotion and disease protection. Identification of such non-antibiotics based antimicrobial alternatives against pathogens associated with YSI is an immediate requirement of the poultry industry.

Dr. Mohammed Arshud Dar, research scientist at the Vaccines and Infectious Disease Organization – International Vaccine Centre (VIDO-Intervac), University of Saskatchewan, has embarked on a research study to identify in ovo effective, safe and economical non-antibiotics alternatives for the prevention of YSI in broilers.

Bacterial isolation, identification and characterization of the pathogen associated with YSI in broilers is the prerequisite to develop non-antibiotics-based control strategies. The pathogens causing YSI will be isolated and characterized with respect to presence of virulence factors.

Selected bacteria will be tested for their ability to cause YSI and in-ovo characterization of immune stimulants (CpG ODN, Polyphosphazene, Poly I:C and Loxoribine) as standalone or in combination treatments will be evaluated for their effectiveness against the major pathogen causing YSI.

The findings
Based on cultural, morphological and biochemical assays, results show that E.coli is the major pathogen associated with YSI in Saskatchewan. Based on presence of five to eight virulence associated genes in avian pathogenic E.coli (APEC) and other characteristics, the molecular characterization of field isolates has shown close relationship to two well-characterized reference strains of APEC.

An experimental infection model of YSI in chickens was developed and challenge protection studies show greater than 90 per cent, 70 per cent and 65 per cent protection with in-ovo use of CpG ODN, Poly I:C and Polyphosphazene, respectively. However, mortalities in the Loxoribine-administered group were higher than the sham control. These findings suggest that in-ovo administration of CpG ODN may serve as a potential candidate for replacement of antibiotics for the prevention and control of YSI and ECM on farms. The research team are continuing to analyze data from challenge protection studies.

Research outcomes and next steps
Industry use of in-ovo administration of CpG ODN to prevent YSI will require determination of the optimal dosage and potential interference with in-ovo administration of Marek’s Disease Vaccine. Besides the control of ECM due to YSI, it is expected that on completion of this research the characterized immune stimulants will significantly improve disease resistance, growth rates and vaccine responses in young chickens.

This research is funded by the Canadian Poultry Research Council (CPRC) and is part is part of the Poultry Science Cluster 2 which is supported by AAFC as part of Growing Forward 2, a federal-provincial-territorial initiative. The research additionally received funding from Saskatchewan Chicken Industry Development.