Features Nutrition and Feed Research
Cracking Down on Disease 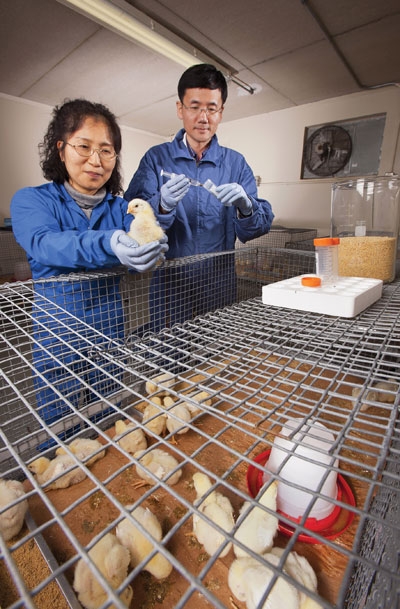 It’s not mother’s milk, but egg yolk may be the closest remedy for boosting the immune system of newly hatched chickens against infectious diseases such as coccidiosis.

A major disease of chickens, coccidiosis is caused by intestinal parasites – single-celled protozoans in the genus Eimeria. Disease-affected birds are unable to absorb feed or gain weight, costing the poultry industry more than $600 million annually in the United States and $3 billion worldwide.

“Coccidiosis is associated with other pathogens, such as the one that causes necrotic enteritis – a prevalent gut disease of poultry,” says avian immunologist Hyun Lillehoj, who works in BARC’s Animal Parasitic Diseases Laboratory. “By controlling one, you’re also reducing the impact of the other.”

Good management practices and live vaccinations reduce the spread of coccidiosis, but alternative strategies are needed to help control drug-resistant strains and to enhance organic farming for the poultry industry.

Generally, a host can develop two types of immunity – active and passive – to resist infection. Passive immunity allows immune molecules that are already formed to be transferred from the hen, via the yolk, to the chick. Active immunity relies on vaccines to build immunity in the birds.

“When chicks hatch, they have no immunity to this pathogen. But if we give preformed immune proteins to one-day-old progeny, they are ready to fight infection,” she says. “It’s similar to how immunity is passed to newborns through milk.”

The method involves extracting antibodies from yolks of eggs from pathogen-free birds that have been hyperimmunized, meaning they possess greater-than-normal immunity due to an abundance of antibodies against the disease. Egg yolk is spray dried, mixed with feed, and given to chicks that have no immune protection right after hatching.

Lillehoj teamed up with ARS visiting scientist Sung Hyen Lee from the Rural Development Administration in South Korea, IASA scientist Eduardo Lucio and other researchers to conduct different experiments to demonstrate the efficacy of inducing passive immunity against coccidiosis.

One-day-old broiler chickens were continuously fed a standard diet containing a commercially available egg yolk powder prepared from hens hyperimmunized with multiple species of Eimeria. They were then given a challenge infection with live coccidia. Body weight gain between days zero and 10 and fecal shedding between days five and 10 post-infection were analyzed. Chickens given 0.5 per cent or less of the hyperimmune egg yolk antibodies had a significant increase in body weight gain, reduced fecal Eimeria shedding and fewer gut lesions compared to control birds fed a non-supplemented diet.

Based on these results, one company has developed a commercial product that can be fed to chickens to control coccidiosis. Similar technology may be used in the future to guard against other devastating poultry diseases.

This article was originally published in the July 2012 issue of Agricultural Research magazine.