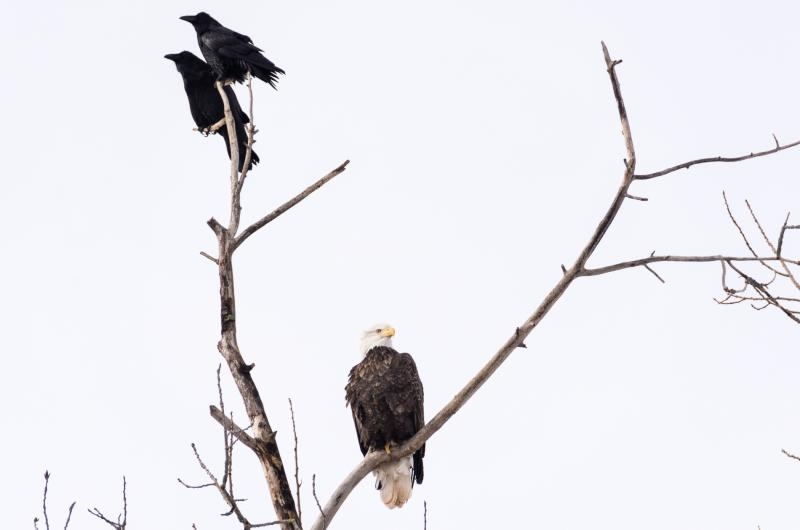 January 15, 2018, Sheffield Mills, N.S. – Dozens of eagles dot the branches of tall trees overlooking a snow-covered Nova Scotia farm field, a bitter wind cutting through their wings as they take turns leaving their perches to swoop through blue skies.

A photographer snaps a photo from the edge of the quiet country road in Sheffield Mills, where roughly 150 eagles and other birds of prey convene to take advantage of the region’s chicken farms, of which there are dozens.

The rural farming community, located roughly 100 kilometres northwest of Halifax, has become a destination for shutterbugs, wildlife enthusiasts and tourists looking to take in the impressive sight.

“The birds are gigantic and beautiful,” said Megan Hodges, a member of the Sheffield Mills Community Association and a local councillor.

“They really don’t congregate like this in many other places, in Canada or the world, so it’s very cool that they are here. They’re so healthy and happy and inspiring.”

Every day between late December and late March, resident Malcolm Lake picks up a bin full of chicken carcasses – left for him by area farmers – and brings the scraps to the field.

He then flings them across the ground, far enough away from the corner of Bains and Middle Dyke roads so that the eagles are not disturbed by humans during their meal.

The feedings – of which there are two or three per day – are one reason the eagles are drawn to the region, as well as the Annapolis Valley’s slightly milder climate, which motivates birds from places like windswept Cape Breton to migrate there during the winter months.

“Many years ago, all the farmers used to just chuck out the chicken scraps on their property, so there was all sorts of availability. That stopped largely because of scares of bird flu,” said Lake, who moved to Sheffield Mills about six years ago.

Feeding the eagles during the winter is a tradition that goes back decades, and one marked each year by the Sheffield Mills Eagles Watch, which throws the annual festival.

More than 1,000 people from across Canada and the U.S. descend upon the sleepy countryside each year for the event, braving chilly temperatures to watch the majestic birds in flight, screeching as they snatch up the free food – sometimes clashing with each other over the scraps.

“We’re always praying to the weather gods that they will send us clear, cold weekends. The eagles love it when it’s cold and they’re really active at that time,” said Hodges on the edge of the field, as eagles floated through the air behind her.

Pancakes made with locally-sourced ingredients are served each morning of the event at the historic Sheffield Mills Community Hall, a century-old two-room schoolhouse.

New to this year’s festival is a partnership between the community association and the Glooscap First Nation, located roughly 35 kilometres southeast of Sheffield Mills.

An eagle watch kickoff party dubbed “Kitpu” – the Mi’kmaq word for eagle – will be held at the community hall on the evening of Jan. 26, with local food, wine and entertainment, including the Eastern Eagle Drummers. Trevor Gould of Glooscap First Nation will be outdoors by a bonfire spouting Glooscap legends and lore.

Gautreau noted that a common misconception is that chickens are being sacrificed to feed the eagles, but they’re only fed the scraps that are leftover after processing.

“They would scavenge for that no matter what, so we’re just feeding them when the ground is snow-covered so they don’t have to hunt,” said Gautreau. “It’s a tradition and the eagles love it.”