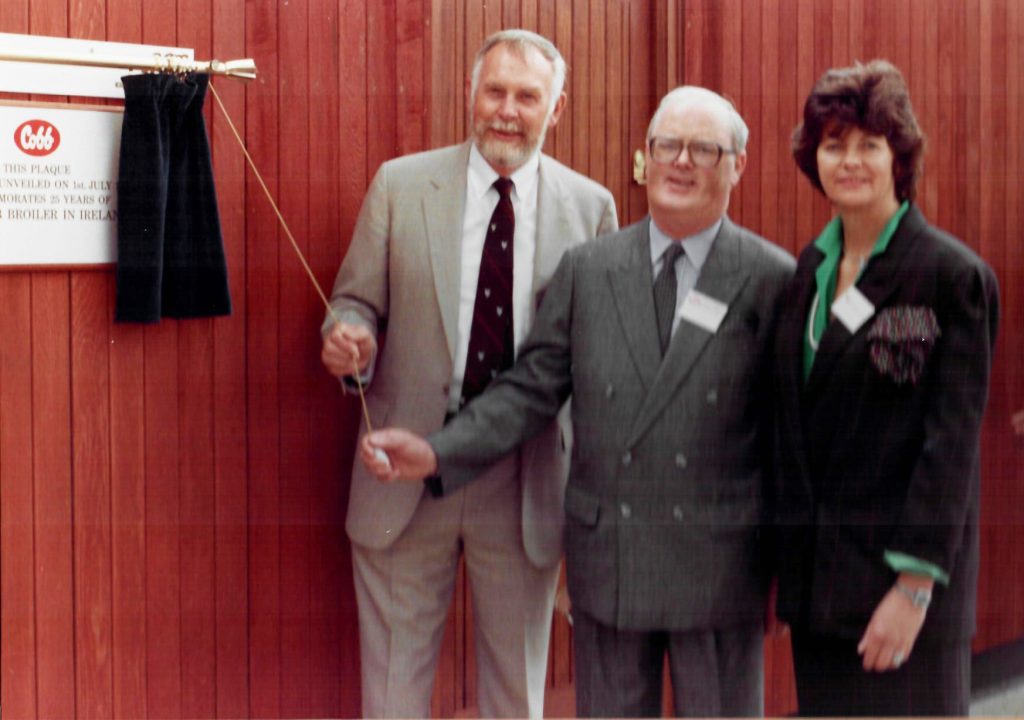 Dan Lenihan with his wife Marian and Cobb president Tony Barnes at the 25th anniversary of Cobb in Ireland in 1989.

Dan Lenihan, who introduced the Cobb breed of chickens to Ireland and contributed to its success across the UK and Europe, has died at age 79.

In the 1970s Cobb was one of the U.S. broiler breeds that transformed chicken from luxury to an everyday meal and Dan Lenihan saw this potential when he bought the assets of Cobb Ireland in 1974. This company had been established in the early 1960s to serve the Irish market at a time when there were severe animal health restrictions on imports of poultry.

Cobb Ireland built the hatchery at Straffan, near Dublin, and after purchasing the business Dan Lenihan bought another hatchery at Mullingar, County Westmeath to expand production. This increased from less than 100,000 to more than two million parent stock chicks a year by 2000, delivering throughout Ireland and the UK.

Cobb Ireland began exporting breeding stock to Taiwan and Syria in 1975 and as the Cobb breed has expanded across Europe, Middle East and Africa through the last 40 years, the company has played a significant role in this growth.

During the last 20 years Dan Lenihan’s operation in Ireland has transitioned from a distributor to a contract producer for Cobb Europe.

Ireland’s unrivalled history in terms of notifiable diseases has played a key role in Cobb being able to protect supply to customers during the avian influenza issues that occur from time to time in Western Europe. The farms hold a combination of great grandparent and grandparent stock.

“Dan has been a true ambassador for Cobb over the last 40 years,” said Mark Sams, general manager for Cobb Europe. “He was a trusted and respected partner who built up relationships within the industry from the U.S., Africa and as far as Australia. He will be deeply missed by us all.”

Dan Lenihan was born in Newcastle West, County Limerick, and initially studied dairy science at Cork University. After working in a hatchery in Kill, County Kildare, he set up his own poultry business in Newcastle West with the initial Irish franchise for the Warren Brown egg layer and later sold this business to Whittaker’s Hatchery in Cork.

He is a former chairman of Bord Glad, the Irish Food Board, and also served as chairman of the Respect fund raising charity that helps people with an intellectual disability. He has also been chairman of the National Poultry Council in Ireland and of the Irish Chick Hatcheries Association.

He is survived by wife Marian, son Daniel and daughter Caroline.