Best strategies – and positive reports from Ontario on use of fungal product. 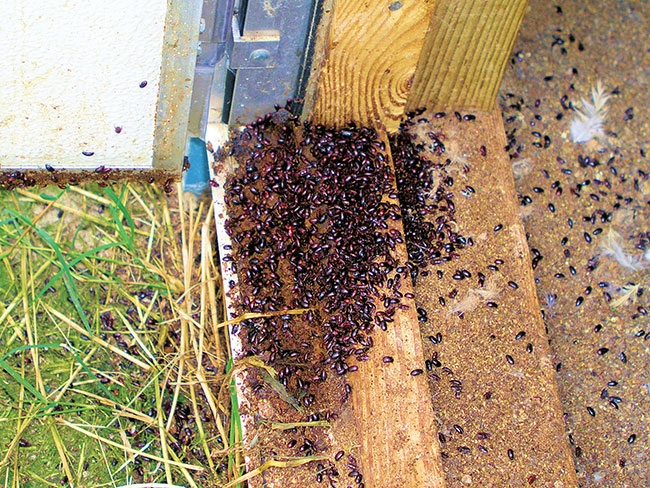 Al Dam, poultry specialist at the Ontario Ministry of Agriculture, Food and Rural Affairs, says that in 2018, he had more inquiries about darkling beetle infestations than he’s had in a long time.

“Is it resistance to insecticides, loss of certain insecticides, improper application of products, general biosecurity management, or all of the above? We’re not sure,” he reports. “The temperature in 2018 was pretty high in some areas in the summer and that’s obviously great for insects. In every situation I heard about, producers were seeing more and more of the beetles over time and may not have realized necessarily how bad things had gotten until they see a population explosion.”

Some producers, says Dam, are also seeing populations of hairy fungus beetle (it feeds on fungus in straw and that’s the way it gets into the barn). To combat this, some farmers have switched from straw to shavings, switchgrass, cardboard products or peat moss, but Dam notes that producers should double-check to make sure any new bedding choice is ‘in line’ with the approved beddings in their board’s on-farm food safety program.

Darkling beetle control
With darkling beetle, as with any insect pest, a multi-pronged approach is always needed. In conjunction with other control factors, some producers are having success with a targeted fungal product called balance ES-Beetle. “These products take a while to work,” Dam points out. “You must use the product properly and also keep up with the application recommendations to achieve and maintain control.”

The active material in balEnce, explains Jim Skinner (owner of U.S.-based distributor Terregena and an adjunct professor at Western Carolina University in North Carolina) is a fungal spore that was discovered by an Italian entomologist 200 years ago. It occurs naturally in soils around the world and is host-specific. “Some years ago, a scientist at North Carolina State University was able to isolate the strains that specifically target darkling beetle, and strains for other insects as well,” Skinner says.

It’s available in liquid concentrate and powder. Skinner says they both work similarly and that most farmers use the liquid. The spores are picked up by the darkling beetle, and the spores then grow, reproduce and kill the insect in one-to-five days.

Jordan Poelman has used balEnce for five years at his family’s broiler farm in Bayfield, Ont. He’s seen very good results for control of both darkling beetles and flies, and he has became a product distributor.

For the family’s older barns, which had a very high pressure of darkling beetles, the Poelmans were spending significant time and resources on chemical sprays and commercial fogging services. However, within three cycles of using balEnce, Poelman says both adult beetles and larva were not very noticeable, and that the beetles have never developed any resistance to the product.

Barn humidity control is also important in darkling beetle control. “You need to keep manure dry, so it’s about good ventilation and also managing water usage,” Poelman says. “Proper line heights are needed and really high water quality is also very important. With very high water quality (I use Hydroxyl II), you have less water wastage, better feed consumption and less ventilation is needed. I also do dry clean in between flocks, and a heavy-duty wash once a year with Hydroxyl II.” Poelman also values a broiler Facebook group where ideas and solutions for insect pests, achieving water quality and more are discussed.

When asked about the importance of keeping manure dry, Ontario broiler producer and balEnce-ES user Alex Westerhout reports that he’s “not sure,” as he finds most of the beetles come out when he turns on the heat at the start of flock and the litter is dry. “My litter is normally very dry anyway,” he adds.

Westerhout has been using the product for about four years since he heard about it through Poelman. He applies it with a backpack sprayer along the base of all interior walls and around posts as well. “I do it every crop before new bedding placed with enough time to let it dry before the bedding goes down,” he says.

He’s used both Sevin Dust and Debantic 50WP products in the past and says these products didn’t result in any decrease in darkling beetle population.

Westerhout isn’t sure if he’s saved money using balEnce, but he says he doesn’t really care. “It’s been very effective,” he says. “I saw lots of dead beetles for about one year and then had a large crop of dead larvae everywhere.

“Since then, just see a few beetles every crop. I don’t think you ever totally eradicate the beasts once infested – the eggs can take a long time to hatch after being laid in the walls.”