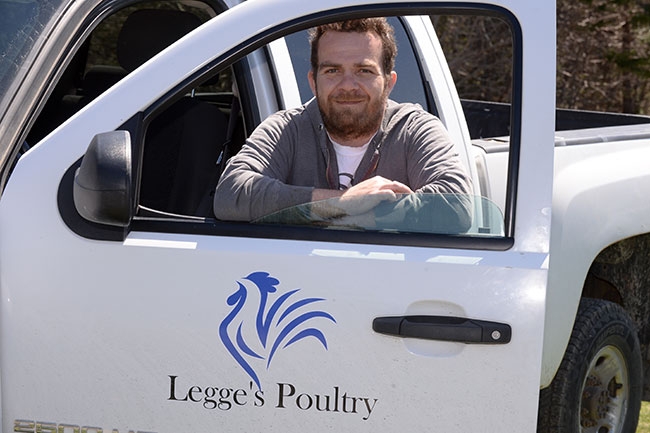 At 38-years-old, Darryl Legge is one of the youngest broiler producers in his province. Photo: Chicken Farmers of Canada

Chicken farming in Canada’s most eastern province is not without its challenges, but one young farmer is keen to tackle broiler production on the “Rock”.

As a teenager, Darryl Legge couldn’t get far enough from the family farm. “I remember being 17 and helping unload chicks thinking I’m never coming back here,” he says. He achieved a degree in political science from Newfoundland’s Memorial University followed by a few years working in jobs as far afield as British Columbia. Soon, Legge was seeing the farm he left behind through a different lens.

“Sometimes you have to walk away from what you’ve always known to realize what you want to do,” he says, adding he encourages others to get a few years experience off farm before joining the family business. “Work different jobs, experience other industries, talk to different people, look ahead to where your job can progress and see if you can envision yourself in those roles.”

By 2007, Legge was in his late 20s and decided to join his parents in business as a third-generation farmer. He’s the youngest of three siblings, and the one who chose the “sights and smells” of farming. “Chicken farming can offer a good life, income and lifestyle,” the producer says.

The two generations would farm together for two years before transitioning to the younger Legge. The family didn’t seek a consultant for help with their succession plan. Legge has since learned more about succession planning through his involvement as member and former chair of the Newfoundland Young Farmers Forum and encourages other farm families to use the resources that are available.

“It can get complicated when mixing business with emotions and family members,” Legge says. “People’s expectations can change. There can be disagreements and misunderstandings. It’s nice to formally have something written down so no one’s surprised when you go to sign the final agreement.”

Located on the Avalon Peninsula in southeast Newfoundland, Legge’s farm is comprised of 120,000 birds in eight cycles over four barns on two sites: Harbour Main and Holyrood. Since assuming ownership, Legge has been diligently focused on innovating and improving efficiencies.

He says technology, such as the bin weigh scales and humidity controls, have paid for themselves quickly by controlling feed costs and improving bird gains. Legge doesn’t believe his barns are much different than others across the country, though he prides himself on being able to match or better production numbers, including mortality rates, bird size and feed conversions.

Challenges
Legge aims to keep his facilities simple. Utilizing the same equipment consistently over all four barns means fewer systems and sizes for stocking replacement parts. Also, with equipment dealers located on the mainland, in the Maritimes and beyond, it’s not feasible to fly a representative to Newfoundland every time something needs fixing at the farm. Legge attempts most repairs through trial and error, armed with equipment manuals and phone calls to the service help lines.

The province’s island location also means Legge is sourcing his inputs long in advance. Grain is brought to the Island in grain boats and processed through a mill in St. John’s. He orders chaff from the main sawmill months in advance.

Financing barn upgrades and expansions can also be a challenge in Newfoundland. Legge is one of six broiler farmers in the province – all are in the Avalon Peninsula within short distance to the processing plant. The provincial industry is structured such that there’s one main vertically integrated company (with farms, feed mill and processing plant) that holds the province’s entire broiler quota. What the company doesn’t produce in its own barns is then contracted to independent farmers like Legge. “We’re in a supply managed industry nationally, but provincially we don’t hold quotas in Newfoundland.”

This has proven to be a real challenge in the past says Legge. “How do you secure funding for an upgrade or expansion with no quota or license?” he notes. “It’s a hard sell to get an accredited lender on board.”

As a further stumbling block, the grower contract Legge and others hold guarantees a market with one year’s notice of any changes. To lenders, that’s proven to be too much instability in the past.

At 38-years-old, Darryl Legge is one of the youngest broiler producers in his province.

Stability
Now, the future is looking a bit more stable. The relationship between growers and the province’s quota holder has greatly improved and there’s indication of a 10-year revolving contract, with the opportunity for those farms with grower contracts to potentially access more quota to expand flock sizes. “This should make us more attractive for financing,” Legge says.

It also gives him the opportunity to consider expansion. In the future, Legge knows he may need to relocate his farm. With 30 acres of land currently owned, it’s not enough to support the manure generated by his flock.

Manure management has become a cost for his farm, as it needs to be trucked up to an hour offsite for use by other farmers. And because the broiler barns are in the heart of their communities, Legge is under intense neighbourhood pressure to not store manure on-farm for too long before complaints develop.

Need to innovate
Legge often performs his own research trials – like a bedding trial that compared pelletized grass, shredded paper and shavings to find what is most efficient for his farm. He’s the first farm in Newfoundland to trial a thermal fogger and has been very pleased with the time and chemical saved while getting into every crack and crevice in his barns.

Recently, he’s had success trialling an organic insecticide that uses spores to target and kill grain beetles. “We’ve been able to attack the life cycle and control the beetle without having a negative effect on the birds in the barn,” he says, noting he’s often reading research articles and features about other Canadian farms to learn.

“We have to innovate,” Legge says. “With our industry structure, there’s only so much money in the pie that we’re going to get as income, so it’s up to us to control costs.”

At 38-years-old, Legge is one of the youngest broiler producers in his province. “It’s difficult for new people to get in our industry, and for seasoned farmers to get out,” Legge says.

For now, he focuses on what he can control on farm. In quieter moments, he can often be found in his barns, sitting on a bucket, observing his birds and identifying ways to improve their welfare and environment. “I love what I do,” he says. “Chicken farming is a great lifestyle.”