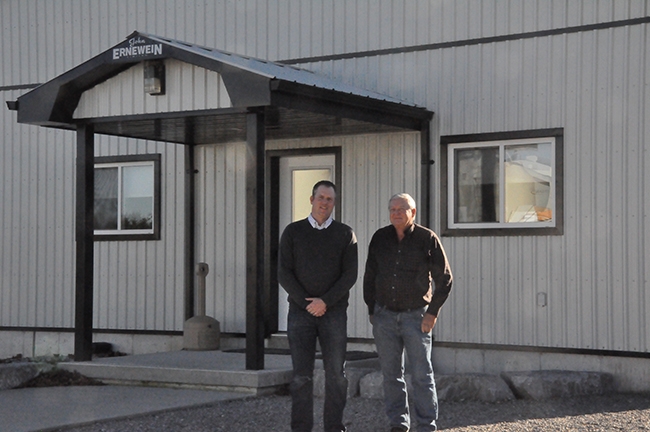 David Brock (above right) and his son Jamie have made Four Corners Poultry one of the most progressive breeder operations in the province.

David Brock never thought he would be a chicken farmer. After finishing school and working as an agriculture representative for several years, he fulfilled his dream of owning 1,000 acres and raising pigs in Staffa, Ont. But 20 years later, and with two sons interested in farming, David was looking towards providing income stability for multiple families and used his astute business skills to analyze the poultry industry.

In September of 1997 he purchased Maple Leaf Food’s corporate broiler breeder operations in nearby Monkton and Palmerston and incorporated Four Corners Poultry. With the purchase came more than 20 employees and out-of-date facilities. Overwhelmed, he brought on board his son Jamie (then only 21 years old), who used his organizational skills to get the farm on track and assist with employee and labour issues. Son Mark, having a great interest in crops and technology, managed the family’s land base in Staffa, began a progressive cropping operation and slowly set about incorporating manure from the breeder operation.

As production manager Don Haasnoot told Canadian Poultry, David is a “strategic, forward-thinking” owner and his vision was to bring the breeder operation back to the Staffa land base. David admits he spends a long time thinking about how the future should be shaped and says business owners need to realize that “big changes can’t be made all at once, they must be calculated.”

He’s used this philosophy over the past 14 years to slowly build new production barns at the Staffa site while ensuring the farm is financially viable, and most importantly, sustainable.

Understanding that energy costs will continue to rise, David has ensured the new facilities take advantage of the latest technology and efficiencies. Four Corners now grows its own pullets and boasts a smaller spiker facility built to provide an internal supply of males and enhance biosecurity. The family also invested in having a natural gas line extended to the Staffa site to eliminate propane use and the biosecurity risk of propane trucks travelling to the farm. Natural gas, now used to fuel a corn dryer, run several farm service vehicles and heat the barns, has saved the operation 35 per cent in energy costs.

Because the area in which their farm is situated is rather unique, having sinkholes (open cracks in the bedrock that allow surface drainage to enter the underground aquifer), the Brocks are “very conscious” of environmental responsibility. Although it’s unknown whether the aquifer is the one that supplies drinking water for the area, and they work with the Ausable-Bayfield Conservation Authority on monitoring and have a test well on the property. Wash-down and clean-out procedures have been enhanced to reduce water use and every facility has very large grass buffer strips to absorb runoff.

Long before the poultry operation was a consideration, David had purchased 50 acres of woodlot and created tree shelterbelts on the crop land to prevent erosion. The land is systematically tiled to prevent flooding and reduce runoff and Mark utilizes GPS and historical farm data to ensure that manure spreading is effective and has minimized or eliminated the use of potash and nitrogen inputs.

Since becoming a self-grower, Four Corners Poultry has been Salmonella-free and works continually to maintain this status. Along with an intensive cleaning/disinfection program and attention to flock husbandry, rodent and fly control are key areas.

Although “we couldn’t afford it at the time,” Jamie says, the operation began employing rodent services several years ago and has recently begun using parasitic wasps instead of chemicals to control flies to further reduce Salmonella risk.

As a grower for Cargill’s, the supplier to McDonald’s restaurants, the Brock family is keenly aware of consumer food safety concerns. They strive to practise antibiotic-free management, which is achieved through a Coccidiosis vaccination program and careful attention to brooding management, particularly on litter moisture levels in the first two weeks of placement. Blood testing by hatchery technicians and environmental swabbing pre-placement further guide brooding management.

David has been a board director for the Ontario Broiler Hatching Egg and Chick Commission (OBHECC) for the past six years and was heavily involved with OBHECC’s revamped cost-of-production formula, a strategy established so that the industry “doesn’t become stale” and income stability for producers is maintained.

Now that the farm is nearly where he and his family want it to be, he says “we can do even more sustainability projects.”