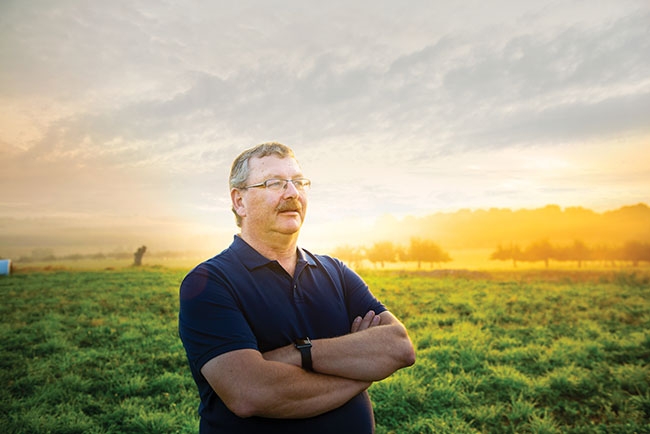 It is a path with bumps and twists, but at each milestone along his career, David Coburn saw the need and opportunity to invent – and pioneer change.

His earliest poultry memory is of Friday mornings spent with his parents and grandparents, “Cleaning, plucking and dressing 40 to 50 birds to fill a contract supplying chicken to the local hospital,” he recalls. At that time, Coburn Farms also had 2,000 to 3,000 floor-raised birds and an egg grading setup in the farmhouse basement as part of their mixed operation.

In 1967, Coburn was seven when his father expanded the layers and built their first commercial poultry barn on the family farm at Keswick Ridge, just west of Fredericton, N.B. It was a deep pit barn with grading room – an upgrade from the farmhouse basement. By nine years old, Coburn’s grandmother taught him to gather eggs in their 10,000-bird barn.

By 1970, the flock had expanded with 20,000 additional layers in a new shallow pit barn. The introduction of supply management would soon follow.

“I remember how rough and tight things were, pre-supply management,” he says, noting the early ’70s saw a big influx of Manitoban eggs in the New Brunswick market. “If Dad didn’t have five kids (unpaid labour) to look after birds, we would not have made it.”

With supply management in place, Coburn’s father partnered with two other egg producers to build the Sunny Glen Eggs grading station, which would handle 85,000 eggs daily.

By the early 1980s, Coburn was fresh out of agricultural college with a business diploma, and eggs were under attack as a contributor to the cholesterol crisis. “I quickly learned what giveth can be taketh away,” says Coburn, of witnessing the profound quota cuts.

With trade threats at the World Trade Organization and the Canada-United States Free Trade negotiations, Coburn was seriously considering selling. But his passion couldn’t be shaken. Interest rates peaked at 18.5 per cent and helped him decide: 25,000 birds.

Eager to innovate
In 1988, Coburn Farms looked at opportunities to diversify with the apple orchard and reduce reliance on the table market. They found a fit with apple cider, which led to on-farm production of 50,000 litres annually. Ten years later the table market would collapse, and the Coburns trimmed their orchard acres from more than 100 to 10 acres, supporting the cider production.

Also in 1988, Coburn heard two professors at the Nova Scotia Agricultural College were looking for a commercial farm to test a chicken barn computer monitoring system. Coburn and his wife, Karen, jumped in the car and headed for Truro, N.S., to convince them to trial the program at their barn. It worked. Coburn Farms had the first computerized poultry barn in Canada by the following year.

“I spent the first night in the barn,” Coburn says. “I figured we could kill them as easy as we could keep them alive with this new system.” But, a few months later when a computer board died, Coburn was already convinced and “afraid to be without it.”

He had a product called De-Odorase with the claim to reduce ammonia levels by 50 per cent and needed a trial farm. “We knew from our monitoring that ammonia levels could be a problem in our barn,” Coburn says. “So, we tried it.”

The first two years Coburn Farms fed De-Odorase to the layers from November to April, during peak ammonia months. Coburn was impressed. It cut ammonia levels in half, making a better environment for the birds. “We’ve been feeding it ever since,” he notes.

De-Odorase also dried the poultry manure out, which meant the Coburns had to make some changes to handling. Together with the pomace left from the apple cider production, Coburn built the first in-vessel composting system in Atlantic Canada in 1993 to compost all the farm’s wastes. What isn’t used as fertilizer on farm is sold to local gardeners under the Natural Gold Compost brand.

The early ’90s also saw the grain transportation subsidies end – known locally as Atlantic Feed Trade Assistance program. “At $19.25 per finished ton of feed, it was almost a $20,000 a year hit,” Coburns says. “I wasn’t prepared to take that hit.” Therefore, he established an on-farm feed mill.

“It was one of the last things I wanted to do,” Coburn admits, “but was one of the best moves made in my farming career.” He explains how he can keep tighter controls on inputs while measuring the results in his flock.

It was through his feed-making mindset that he noticed an alternative to feeding oyster shell advertised at the World Poultry Show in Atlanta in 1996. The producer’s can-do attitude led to him becoming the first farmer in the world to feed Bioplex organic minerals. “The improvement with cracks and broken eggs was incredible,” Coburn observes. “We decreased eggs being thrown out by 50 per cent.” He’s since switched to feeding all organic minerals.

In the early 2000s, the farmer found oat straw was twice as effective as barley straw in making compost. However, for his local straw supplier to switch, he needed an oats grain buyer. And so began Coburn’s inclusion of oats as a fibre source in the poultry rations.

Not long after, a bad bearing in the hopper mill resulted in a batch of feed being used with whole grain kernels. “We had whole kernels laying everywhere around the barn,” he says. Coburn was at first concerned, but he discovered the shell-less eggs dropped from 30 to five per day on 25,000 birds.

Consulting with poultry nutritionist Steve Leeson at the University of Guelph, Coburn learned, “The birds benefit from having bit pieces to make their crop work.” He switched to a bigger half-inch screen to allow more odd whole kernels through – and cut milling time and improved eggshells since.

“There’s lots of things I’ve learned because of mistakes I’ve made over time,” He says, describing his career trajectory. “Don’t be afraid to try new things or make mistakes, just try not to do the same mistake twice.”

A shared passion
Coburn is grateful to see his three children share his passion and love for agriculture. The planning has started to transition two sons into the farm. Glen, 28, looks after the feed mill and compost and has started a pumpkin venture on five acres. Tyler, 26, looks after the egg layers and has a small beef herd. And Jennifer is a nurse and lives close by with her husband, Daniel, and 14-month old son, Andrew.

Last year, Coburn and his sons built an enriched housed poultry barn with a Farmer Automatic system to hold 34,560 birds. It’s the first poultry barn in New Brunswick with tunnel ventilation. It’s also the first with in-system lighting to put exact white light all through the barn. The family celebrated the new construction with an open house before the birds moved in, attracting 400 guests from the farming and local community.

Every year the family hosts Open Farm Day at Coburn Farms and welcomes the community. Coburn is especially proud to show visitors his hobby: a museum project. He started it as a way to celebrate the farm’s bicentennial anniversary.

Among the memorabilia is the original egg grading machine from his childhood, and a photo of Hon. Eugene Whelan on a hay wagon at Coburn Farms after Canada’s supply managed system was introduced.

Coburn Farms by the numbers