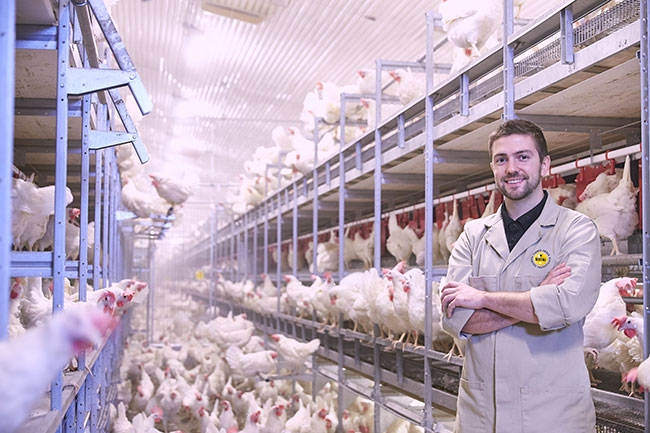 The son and nephew of Quebec’s first organic egg producers, David Lefebvre had plenty of unique experiences growing up. One of his fondest memories is gathering eggs with his family on weekends. It was no easy task.

The organic barn had wooden nests. One by one they had to manually remove panels surrounding each nest to handpick the eggs from under the birds. “It was a lot of work,” Lefebvre recalls. But he turned it into a fun competition with his sister Marie-Pier, racing to see who could finish first. The results were evenly split – some weeks Marie-Pier would win; other times her brother was faster.

Today, things are far different. For one, the business Ferme St-Ours is much bigger. When Lefebvre’s family first converted their dairy farm into a layer operation in 1993 they had 20,000 hens in conventional cages. Now, the Saint-Ours, Que.-based business has 190,000 layers in a mix of different housing systems and is one of the largest organic egg producers in Canada. They also raise their own pullets and have 20,000 broiler breeders. What’s more, the business has 5,800 organic maple tree taps, 350 hectares of crops (of which 200 are organic) and an organic feed mill for their organic egg production.

Another thing that’s changed is the 27-year-old now rarely collects eggs himself. Instead, he manages a team of employees. And the staffers do much of their work in cutting-edge facilities Lefebvre personally designed. Indeed, as both a producer and professional engineer he has a rare combination of talents.

The seventh-generation farmer acquired that expertise from Quebec City’s Laval University. “I’d always worked on the farm,” he says. “But I wanted to learn something else and discover my own passion for agriculture.” Lefebvre started out studying environmental engineering for agriculture but graduated with a degree in water management.

He then worked for a Drummondville, Que.-based engineering consulting firm called Fusion Expert Conseil. The company specializes in building agricultural facilities. It was an invaluable experience. Lefebvre managed dozens of construction projects spanning all walks of poultry.

He oversaw the entire process – from barn sketches that considered every piece of equipment to planning how fans would articulate throughout the barn to ensuring each project adhered to Quebec’s strict environmental rules. “I learned a lot,” he says, especially since chicken and turkey barns were new to him.

While he grew up in the layer business, he absorbed new expertise on that end as well. All along, his end goal was to learn how to modernize the family business. He did just that.

While still at the engineering firm, Lefebvre designed three barns for Ferme St-Ours. One was a two-barn aviary-based site that would house 20,000 layers each. Another was a rearing barn where 20,000 pullets would learn to use the aviary system. And he drew up a third plan for 8,000 broiler breeders.

In a display of Lefebvre’s talent, he designed the free-run barns to be flexible so that they could easily be converted to organic operations one day if needed. He did so by planning them in accordance with the demands of organic organizations. Firstly, he gave them windows to provide natural light and doors so the layers could go outside. He also made sure there was extra space per bird in the outdoor yard.

Lastly, he gave each barn what he calls a “winter garden”. For organic certification, the birds must be allowed outside a third of the days in a year. In Lefebvre’s “garden”, the walls and roof are cladded with transparent plastic sheets to allow for natural lighting and ventilation, thus qualifying it as outdoors. The space allows birds to go out sooner in the spring, later in the fall and even when it’s raining or during a disease outbreak nearby.

Now, if the Lefebvres ever decide to convert the barns to organic they’re just a few steps away. They’d have to reduce the number of layers in each barn from 20,000 to 13,000 to provide extra space per bird. They’d have to replace white hens with brown ones. Lastly, they’d need to switch to organic feed.

All three facilities Lefebvre designed are now in production. And he’s been able to help manage the business’ transition to aviary first hand. That’s because he’s now back with the family business fulltime, overseeing operations working alongside his family.

He says the transition to free-run was a challenge but well worth it. “With an aviary system, it seems like you’re walking into the birds’ universe,” he says. “We’re really satisfied with the system and think we’re in a good position.”

Marie-Pier agrees, adding that her brother’s expertise has been a great asset. “He gets really involved in each project and brings new ideas,” she says, noting that he’s also a great manager. “As a producer he’s now very complete.”

Lefebvre shares his knowledge with high school students as well. On behalf of the Quebec Federation of Egg Producers, he visits schools to teach youth about where their eggs come from. For instance, at a recent event he outlined the egg supply chain and also broke down the differences between enriched and conventional cages.

In the end, Lefebvre is glad he took the path he did to find his calling. “I feel like I’m in a great place.”