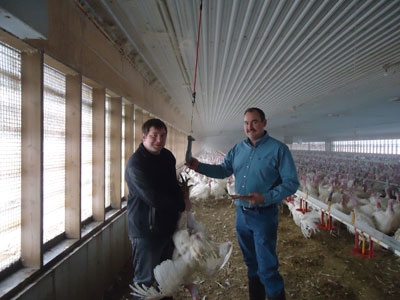 Turkey producers can therefore proceed with confidence with DDGS inclusion rates of up to 15 per cent, provided that rations are correctly balanced. The exact feed cost savings achieved by producers will depend on the price of DDGS versus the price of other grains and proteins, but may be significant.

DDGS from corn are a co-product of the U.S. and Canadian ethanol and distillery industries and are widely available across Canada. During most times of the year, they represent a significant opportunity to reduce feed costs.

DDGS are a moderate energy and amino acid ingredient, a good source of available phosphorus and highly palatable. Feeding trials in the United States have demonstrated inclusion rates of up to 20 per cent in tom turkeys without any detrimental impact.

In Canada, turkey producers and nutritionists have been cautious in increasing inclusion rates past 10 per cent for fear of reducing growth performance and increasing wet litter challenges. However, our recent trial demonstrates that DDGS inclusion rates can be safely increased.

Over the last several years, customers of Gowans Feed Consulting have been successfully feeding DDGS at inclusion rates of 10 per cent in the grower and finisher stages of tom turkey rations but were aware of the notion of realizing significant feed cost savings opportunities by increasing the inclusion rates. Table 1 and Figure 1 present the theoretical monthly feed cost savings of feeding DDGS in tom turkey grower finisher rations at 10 per cent and 15 per cent in southwestern Ontario over diets made without DDGS and the cost of DDGS relative to corn and soybean meal. Over the past year, savings at 10 per cent inclusion have ranged from $4.72 to $12.64 per tonne of feed while savings at 15 per cent have ranged from $7.43 to $25.12 per tonne of feed. Feed cost savings are at their highest when DDGS are at a discount to corn and soybean meal prices are over $550 per tonne.

In order to gain confidence and demonstrate these potential savings, a commercial scale feeding evaluation was required. Great Lakes Poultry Farms Ltd., a large modern turkey production complex near Wingham, Ont., had four commercial grow-out barns available and is in close proximity to the Fischer Feeds feed mill, a large-scale fully automated modern facility in Listowel, Ont., with the process control necessary for the trial. The U.S. Grains Council provided funding support for the demonstration. The trial was conducted at Great Lakes Poultry Farms’ Wingham West facility from January through May 2012.

Both treatments performed similarly with the 15 per cent DDGS treatment coming out slightly better in weight gain and with a lower feed cost at 115.5 days. Overall, the feeding trial demonstrated that there were no negative effects of increasing the DDGS inclusion rate. This should give turkey producers and nutritionists the confidence to increase inclusion rates to 15 per cent.

Neil Campbell is a partner with Gowans Feed Consulting, a leading independent poultry and swine nutrition consulting company working for producers across Canada and in select international markets. Neil is responsible for business development and consulting on feed cost reduction and ingredient price risk management for clients. More information on this feeding demonstration can be requested through Neil by e-mail at neil@gowansfeedconsulting.ca or by telephone at 519-866-5927.