Dean Penner and his wife Carolyn purchased their farm in 1989 and have expanded their broiler breeder operation and added broilers and hogs. 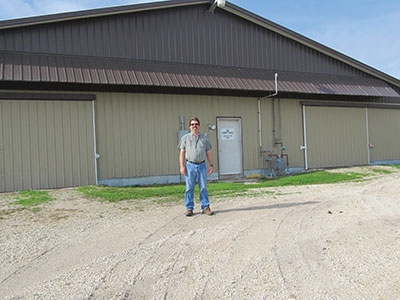 Near Steinbach, Manitoba, sits a farm that is the pride of Dean Penner and his family. “I grew up on a broiler and grain farm, and as a young adult, I did road construction,” he recalls. “But when I got married to Carolyn I wanted to be at home more, and that was a big part of the motivation to start farming. It’s a good lifestyle to have for raising a family.”

The landscape is flat in the area, with some other farms nearby. One edge of the Penner farm actually touches on Steinbach’s city limits, which is convenient when a quick purchase is needed. In 1989, when the farm was purchased, it was a 4,000-bird, broiler breeder operation. In 2000, the Penners expanded to 10,000 hens and acquired Dean’s father’s broiler quota (totalling 30,000 kg). In 2005, the family started a hog operation (7,200 animals) at another site.

Dean does the day-to-day paperwork, repairs and maintenance. Employees handle egg collection. “Carolyn pitches in when employees are away, and our son and daughter, who are young adults, help out as well,” says Penner. “They haven’t shown a lot of interest in working full time on the farm yet, but we hope that one or both will be interested in that in the future.”

Over the years, the Penners have made typical updates to the lighting, water, ventilation systems and more. However, they broke new ground in 1993. “I was the first in the province to install bird scales in the barn,” Penner explains. “Technology has changed considerably since then in terms of accuracy of weighing, but at the time and as it is now, scales made it far easier to monitor weight gain.”

CHEP involvement
Penner has served on the board on Manitoba Chicken Producers for about six years and the Manitoba board member at Canadian Hatching Egg Producers (CHEP) for many years as well. Founded in 1986, CHEP represents 235 farmers from British Columbia, Alberta, Saskatchewan, Manitoba, Ontario and Quebec. “Last year was a big year because Alberta and Saskatchewan came on as full members,” says Penner. “That’s a big accomplishment. We now have every province from Quebec westward as members and are working to have the Maritime provinces join.”

Penner has served as chair of the CHEP Advisory Committee for the last three years. In 2013, there were a number of challenges that the Committee handled, namely interpreting market conditions and measuring their influence on overall chicken demand for the Canadian marketplace throughout the year. “Among the key elements influencing demand for chicken in 2013,” Penner says, “were alternating economic growth forecasts, overproduction in the early half of the year, growing spent fowl imports into the Canadian marketplace, and opportunities created by the ever-evolving escalation of prices for competing meats.”

In the spring of 2013, the committee sought to assess the expected level of growth for the rest of that year and this one. It focussed on the factors above, but also: the potential shortages of hatching egg and chicken meat supplies in the U.S., caused by recently reported avian influenza outbreaks in Mexico; growing broiler bird weights; and inflation of food and meat prices.

“Ultimately, we agreed at the end of 2013 that strong growth in demand will likely continue in 2014, and we recommended a 2014 volume similar to the volume set in July 2013,” Penner says. “The whole industry benefits when broiler hatching egg allocations are established on a reliable level of chicken estimates, and the work done by the Advisory Committee helps to achieve this goal.”

Penner also sits on the Poultry Code Development Committee for broiler chickens, turkey broilers, broiler-breeders, turkey breeders and hatcheries. That committee is updating the existing code, which is about a decade old. The Code involves stipulations on how much room birds must have and addresses other husbandry factors. In addition, Penner is chair of the CHEP Production Management Committee, a group with the responsibility for food safety including “CHEQ” food safety program and animal care programs. Members of this committee are in the early stages of creating a new animal care program based on the new code that is being developed. The program will ensure producers follow the Code through an audit process. The CHEQ program gets regular reviews and updates and the audit process is monitored.

“It’s a good group of people in CHEP,” says Penner. “And it’s a very good thing for the industry. It sometimes takes a while to come to a conclusion on something, and it can take a long time to get things in place in terms of government involvement, but progress is steady. It’s been a positive experience, and you learn a lot of things that you would not learn staying on the farm.”

When he attends annual meetings in various provinces, Penner enjoys seeing how things are done differently when the delegates go on farm tours. “It’s surprising and interesting,” he says.

In terms of where the industry is headed in future, Penner says “With some of the animal welfare aspects, there is more outside pressure to do more. We are doing a good job, but I think we have to do a better job of communicating that. Supply management debates are ongoing.” In their spare time, the Penners enjoy quading, spending time at their cabin in the woods and travelling. They would like to do more travelling in the future and so will likely be looking to hire a farm manager.