Producer and vet makes the case for built-up bedding. 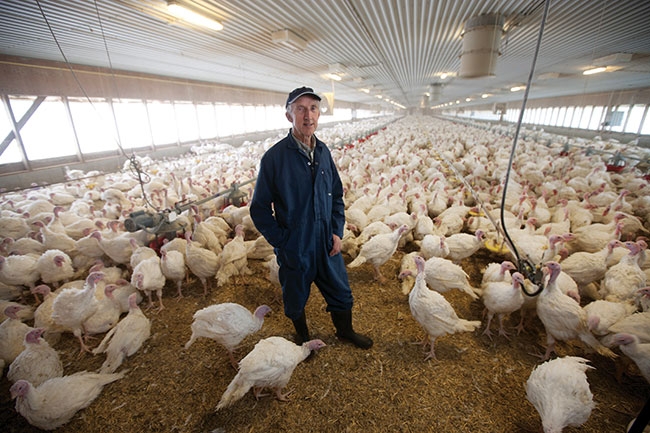 Poultry farmer and veterinarian Lloyd Weber has grown out many crops of turkeys on the same litter and one crop of broilers as well. PHOTO CREDIT: Hydro One

The Chicken Farmers of Canada (CFC) requires producers to monitor litter quality daily. According to its 2018 Animal Care Program manual, currently under review from a gut health and food safety perspective, farmers must also clean out litter after each flock and replace it with clean bedding material.

Similarly, the Turkey Farmers of Canada’s 2010 Flock Care Manual stipulates that producers must clean out combined brooder and grow-out barns after every flock with a recommended downtime of 14 days. In addition, it says farmers need to completely clean out grow-out barns at least once per year.

Meanwhile, in the U.S. producers commonly use deep litter.

“What the Americans do is dramatically different than us,” said Lloyd Weber, a well-known Ontario-based poultry veterinarian and a poultry farmer. Speaking to the Poultry Industry Council Science in the Pub event in September 2018, Weber, who has grown out many crops of turkeys on the same litter and has grown out one crop of broilers back in 1978 with good success, made the case for having another look at reusing litter in poultry barns.

Our birds have evolved, said Weber. They’re drinking 40 per cent more water than they did in 1985, he explained, meaning that there is 40 per cent more water going into that barn, into the birds and into the litter. For this reason, he said litter may not be at the ideal moisture content – something to monitor as the genetics, nutrition and management of our flock changes.

All birds are growing faster. Some producers use air exchangers to keep the heating costs down. We have new heating systems such as in-floor, hot water, and radiant tubes. There are new feed programs as well. Indeed, they’re not just standard broilers anymore. And more changes are coming: Weber predicts that in the next three years all chickens will be raised without antibiotics (RWA).

All this said, is it a good time to have another look at reusing litter?

Moisture and ammonia issues
The most obvious plus in reusing litter is the cost savings, along with lessening the actual job of cleaning out the barn. The deep litter provides a cushioning effect as well as adding extra heat.

The biggest drawback to reusing litter is managing the moisture and ammonia levels.

Check the litter every day with a moisture meter, suggested Weber. It’s a case of getting your M.B.A., he recommends: “Management by Being Around.” He is adamant that you must be in the barn, not just looking at your cell phone.

Twenty to 25 per cent litter moisture is perfect for cocci cycling and dust control. If you clearly see your footprint, it’s too wet.

Is ammonia increased by reusing litter? It depends on management, Weber said. With high humidity it can be an issue all year around. The association between ammonia and moisture has been well validated.

Ammonia contributes to poor air quality, along with CO2 , dust, humidity and temperature. It irritates the lining of the respiratory system, increases mucous production and inhibits clearance of debris and pathogens from the trachea.

CFC says ammonia exceeding 25 ppm is unacceptable. At high levels over 50 ppm you can smell it – your eyes are burning. It can cause blindness in birds, airsacculitis, foot pad lesions and leaves the birds more susceptible to viral infections and secondary infections leading to condemnations. Feed conversion may be increased by up to eight points and final body weight may decrease by up to 0.25 pounds.

According to unpublished work from the University of Georgia, high levels of ammonia may also exacerbate incomplete vaccination – exposed birds are not as well protected. Many producers have acclimatized to higher ammonia levels in the barn, therefore the use of ammonia meters would be advantageous.

“It’s called stress,” Weber said. We know that when birds are stressed the energy from feed that should be going into growth and performance is taken away. Ventilate a bit more and you will get a payback.

Although the reason is unclear, RWA flocks all seem to have loose droppings, which would add to litter wetness. Pushing diets to the limit could be adding excess protein, which contributes to higher ammonia levels, Weber said. He added that lowering the pH of the water to four or five could play a part as well.

Immunity through exposure?
From a biological standpoint, a greater volume of bedding not only has a better holding capacity for ammonia but it can also help to provide immunity to coccidiosis. “The biggest problem we face growing birds without antibiotics is to get the amount of cocci just right so that they have immunity but they don’t break with necrotic enteritis,” Weber said.

On old litter there are more oocysts present and the birds get exposure early. It’s one case where a little bit of dirt is a good thing. Birds are coming into the barn with bacterial flora on chick box paper liners so it’s already there. You’re talking about the microflora – the good bacteria in the litter, Weber said, that helps to competitively exclude the bad.

Anastasia Novy is a veterinarian now working with Weber at Guelph Poultry Veterinary Services. As she told the meeting, there hasn’t been a lot of research on using fresh litter versus reused litter. One unpublished U.S. study found the highest mortality from necrotic enteritis (NE) with clean shavings and early exposure to the NE pathogen. Researchers suspected that birds weren’t exposed early enough to Clostridium perfringens – the organism causing NE.

“Fresh litter has more environmental bacteria, while the reused litter has more intestinal bacteria,” Novy explained. “It makes sense.” That load could be good commensal microflora but can also be pathogenic strains. This means that the birds are supplied with more intestinal organisms at an earlier age, developed immunity to the pathogenic bacteria and that’s why they better tolerated the NE challenge during their most susceptible period.

Poultry farmer and veterinarian Lloyd Weber has grown out many crops of turkeys on the same litter and one crop of broilers as well.

Disease issues
Wet litter may be implicated in turkey cellulitis, where the contact of the skin to the wet litter results in the sternal bursa filled with fluid. It looks terrible, Weber said, and could get condemned. In his opinion these issues are tremendously litter related, but in the opposite way than you might think: in built-up litter there is less problem than when we clean out, possibly because of the reduced ammonia and moisture holding ability of new litter, or perhaps because new litter is more abrasive. The reason is unclear.

Cellulitis, described as an E. coli infection in the skin, is a major challenge that presents differently in chickens and turkeys. Weber said it’s the number one reason for condemnation in Canada and it amounts to a $20 million loss in broilers. If you have a cellulitis problem at processing with broiler chickens, clean out your barn and disinfect it – that would be the most beneficial thing you can do.

Keep it dry
If you want to use old litter for turkeys, keep it dry, Weber said.

Drying agents can be useful for spot treatment but they can’t replace good management – look at controlling ammonia by ventilation or managing watering systems. Better drinkers mean less water wastage and make sure that nipple drinkers are at the right height for optimum use.

Top dressing reused litter may be of benefit to help keep the pack drier. Heating and ventilating before chicks come in to try to volatilize ammonia may also be helpful, as would windrowing, composting, or de-caking the litter.

Deep litter may become an issue with machinery use in barns with lower ceilings, especially with modular loading, and water lines will need to be raised and lowered with the pack.

Can we reuse litter in Ontario? “We think we could in certain situations, especially RWA and organic flocks,” Novy said. Management is always going to be something we need to focus on concerning ammonia, keeping moisture levels under control, and taking precautions before placement.

If exposure to pathogenic organisms outweigh the benefits – clean out! If performance is good, keep going. Maybe if the last flock did well, it would be beneficial to keep that litter around? Downtime should always be respected, however. That is the key for any type of broiler production – experts recommend a minimum of 10 to 14 days.

Always keep in mind that if there are performance-limiting viral or bacterial challenges then cleaning out, disinfecting and an appropriate length of downtime is imperative. As Canadians, we live in colder conditions than most American broiler chicken states, meaning that more heat is required to maintain air quality and keep ammonia down.

Deep litter won’t necessarily work for everyone, Weber concluded. Rules are for the majority; clean out may be best for the industry as a whole.

“Litter quality must be monitored daily. If the litter quality is inadequate (that is, too wet or too dry) immediate measures must be taken to improve it.

The following is a guide for determining the moisture level in the litter:

Will deep litter work for brooding turkeys?
Harry Huffman is an agricultural engineer based in London, Ont. He admits he’s not a fan of leaving litter in the barn for brooding turkeys for subsequent bird crops. Litter is commonly reused for grow-out turkeys; brooder barns are cleaned out after each flock.

With some turkey brooding barns, the producers actually want some extra moisture in the air to assist with various vaccinations, Huffman explained. Given the desired very hot barn environment (90 to 95°F), the barn air can become very dry (low relative humidity).

Some producers will disconnect the exhaust flue on their radiant tube heaters that would normally vent the products of combustion to the exterior of the building. These gases, primarily CO2 and water vapour, are then added to the room environment on a short-term basis to help raise the relative humidity.

If there is deep litter in the building producing extra ammonia then the added humidity will increase the absorption of the ammonia gas and reduce air quality. However, Huffman thinks this is a non-issue.