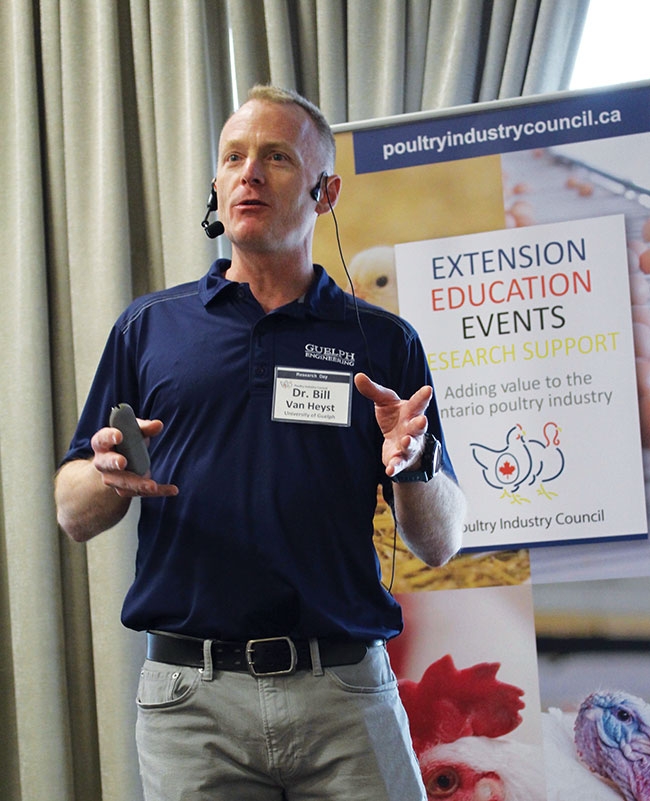 As the world population continues to escalate, so too does the concern around air quality. So, what about in your barn? What is the air quality like in and around a poultry facility? Is there a risk to human health?

Bill Van Heyst is an engineering professor at the University of Guelph, and has been studying air quality in poultry barns for the past 10 years. At the Poultry Industry Council Research Day held in May, he explained that the issue of air quality surrounding poultry barns is already under scrutiny in other countries. For example, Europe, where barns are often located close to urban areas and in some cases inside of town limits. In England, no side venting is allowed.

Air quality factors
The culprit is known as particle pollution, often referred to as particulate matter (PM), which is a mixture of solids and liquid droplets floating in the air we breathe. Coarse dust particles are known as PM10M and include dust, pollen and mold less than 10 microns in diameter. This size of particle is what you might breathe in on a dusty road, for example, and the body deals with this pollution by trapping it in the upper airways to be coughed out as phlegm.

It’s the smaller particles that cause more damage. PM2.5 are particles of 2.5 microns or less in diameter, not readily visible to the human eye. A human hair, by comparison, is 50 to 70 microns in diameter. PM2.5 gets deep into the lungs, affecting oxygen exchange, with long-term exposure potentially causing or exacerbating health issues.

These fine particles are the product of combustion, including vehicles, power generation, wood burning and forest fires, and some industrial processes. In poultry barns, particulate matter is generated by the mechanical agitation of dander, excreta, and ground up straw or shavings through the movement of the birds and through ammonia forming aerosols. Ammonia is generated by bacterial activity on the excreta; very young birds aren’t excreting much at first but the ammonia levels rise as the birds continue to grow.

While older people and children are most susceptible, barn workers may experience a variety of health issues including irritation of the eyes, nose, and throat, tightness or shortness of breath, coughing, irregular heartbeat or heart attacks, and asthma. Personal protection is not yet mandatory; workers don’t always want to wear uncomfortable face masks in the heat.

Should we be concerned?

Researching the baseline
In search of some sort of baseline data, Van Heyst compared the ammonia and particulate matter in three separate broiler operations with three different types of ventilation systems.

The third barn, in Bruce County, Ont., grew 12,500 birds to a weight of 3.6 kg at 48 days at a density of 7.5 per square metre. It was brand new, side-vented with 17 fans and louvres on both sides and fitted with the Clima +200 (Agro Supply) heat exchanger. The bedding was straw.

It was a long research study. Data was collected at the different barns over a period of 10 years spanning all seasons. In Ontario, the weather can be challenging, but Van Heyst basically divided the year into winter, summer, and those widely fluctuating spring and fall times in between. Some of the challenges when comparing the barns included different management, genetics, lighting, crude protein content of the feed and bedding material across different years with varying ambient temperatures. These confounding factors are difficult to isolate and remove their effects. The data also had to be normalized to reflect the growth curve of broilers.

Ammonia and particulate matter levels were continuously recorded. Van Heyst noted that ammonia levels are very low at the start of the growing cycle, starting to register on about day 20 as the excreta accumulated. Typically, the longer the growth cycle, the more excreta, the more ammonia.

Particulate matter is a bit different, said Van Heyst. Particulate matter is generated by mechanical agitation by the birds, as they eat and drink and move around. With a high stocking rate, by the end of the cycle these birds are so tightly packed that they are limited in their motion and we don’t see the PM being generated as it was at the start.

Larger birds mean more emissions
The research showed that the size of the bird does have an effect on the emission factors, Van Heyst reported. The larger the bird, the more ammonia and PM that is generated and emitted. Also, for a longer bird cycle, a side-ventilated barn using a centralized air exchange system has lower ammonia emission factors but higher PM2.5 and P10  emission factors than the older two-storey barn with a hybrid cross and tunnel ventilation system.

What he also reported was a good news story for the Clima +200. Where he expected the ammonia levels to be higher with the longer day birds, they were actually lower, indicating that the heat exchanger unit was contributing to a healthier house. The Clima +200 unit was used predominantly in the winter and contributed very little to the ventilation rate in the summer yet they still noted a reduction in ammonia. “Something’s going on there that we need to look at in a little more detail,” Van Heyst says, suggesting that it could be to do with Clima +200 sending that air into a curtain with fans to keep it continuously circulating.

However, the Clima +200 house was a lot dustier. The higher PM levels were possibly a reflection of the drier litter. The ratio of PM2.5 :PM10 was also concerning, with 65 per cent of the total particulate load being PM2.5. Typical values would be 30 to 40 per cent. “Some chemistry is going on in the barn,” Van Heyst says, explaining that when the ammonia is being neutralized by acid gases it could be forming secondary inorganic aerosols.

Air quality control in barns is not yet mandatory in Canada but this information may be useful to those concerned with the long-term effects of exposure to barn environments, serving as a baseline under normal farm practices.

This data has been collected with the kind co-operation of the farmers and with the support of the Poultry Industry Council, the Canadian Poultry Research Council, and the Ontario Ministry of Agriculture and Food/University of Guelph Funding Agreement. The full report will be published in the summer of 2018.

At a separate PIC event, Van Heyst discussed the potential opportunities in production and management when it comes to improving the poultry industry’s environmental impact.