As the poultry and livestock industries become more regulated, it’s a
challenging and lengthy process trying to bring novel nutritional and
pharmaceutical products to the marketplace. This is particularly true
for in-feed products. 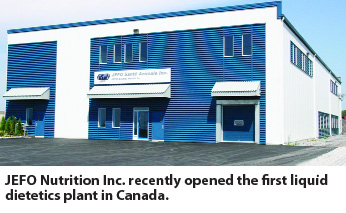 As the poultry and livestock industries become more regulated, it’s a challenging and lengthy process trying to bring novel nutritional and pharmaceutical products to the marketplace. This is particularly true for in-feed products.

Adding to this problem is the increased demand for alternative (non-antibiotic) products due to consumer concerns over antibiotic use, says David Mair, vice president and international sales manager for JEFO Nutrition Inc.

In Europe, tightened restrictions on feed, feed ingredients and antibiotic use has led nutritionists and poultry producers to focus on employing more non-traditional methods to optimize bird health.

He says that one such method involves the delivery of essential and/or beneficial vitamins, minerals and amino acids in a liquid, rather than solid, form.  “In Europe, the use of liquid products has increased dramatically,” he says.

Use of products has also been steadily increasing in Canada. “We’re seeing that traditional (antibiotic) treatments don’t offer the same benefits,” says Mair.  “When liquid vitamin or other nutrient levels are increased during short periods of stress, the birds are better equipped to handle disease pressures.”

He says that liquid products don’t replace antibiotics, but give the birds a better chance.  They can allow producers fast and effective treatments while they complement, not work against, existing feeding programs.

Heat stress and when birds first come in the barn are two situations where liquid products can help to increase productivity under times of stress, he says.  “The birds may stop eating but they don’t necessarily stop drinking.”

He says that delivering nutrients through water offers advantages and “just makes more sense.” For example, to incorporate higher concentrations of Vitamin E in feed, feed mills have to do a smaller, special run, which takes time.  Vitamin E levels can be elevated much more quickly and delivered right when needed if it is distributed in the water, he says.

JEFO had been importing specialty liquid products (known as liquid dietetics) for its customers from FRANVET, the largest manufacturer of liquid dietetic products in France and a pioneer in the technology. Recognizing a growing need for these types of products in North America – and facing escalating shipping costs due to larger orders – JEFO utilized its relationship with FRANVET and worked out a deal with them to license its technology and build a liquid dietetic plant in Canada.

JEFO opened its $2.6 million, 14,000 –square- foot facility at the end of June 2006.  Based in St. Hyacinthe, Que., the new liquid dietetic plant is capable of producing 100,000 litres of highly concentrated products per shift.  Mair says the plant is currently producing 10 liquid, gel, and paste products for the poultry, dairy, and swine markets and also houses disinfectant and soap lines.

He says that the plant exceeds manufacturing standards for liquid, gel and paste products and that “hygiene is of the utmost importance.”  The company’s greatest concern is bacterial contamination, and preventing the growth of any form of bacteria in its products.  To enhance biosecurity in the plant, Mair says that one of the unique features of the plant is that it has a walkway around production rooms so that no unauthorized personnel can enter, but tours and observation can still take place.

JEFO currently supplies every feed mill in Canada and has plans of expanding into the United States.  The company currently has offices in 55 countries and on each continent.n