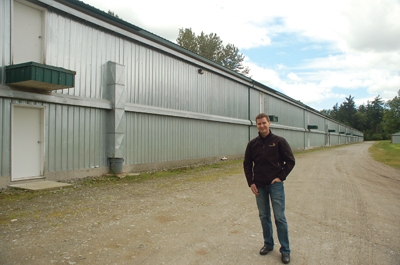 Janzen purchased a 28-acre farm about two kilometres from his dad’s farm, as well as took over management of his dad’s operations.

At just 42, Derek Janzen of Aldergrove, B.C., has already accumulated a service resumé that few people achieve in a lifetime.

Janzen spent five years on the B.C. Egg Producers Association, including four as its chair, and six years as the poultry representative on the Investment Agriculture Foundation of B.C. (the agriculture adaptation council for the province). Not only that, but he also spent over two years as a director of the B.C. Farm Industry Review Board (or FIRB, a quasi-judicial board which acts as a supervisory agent and appellate body for British Columbia’s eight regulated marketing boards and commissions and also hears appeals of the province’s right-to-farm act) and four years as a director of Fresh Start (a group of B.C. egg producers who purchased the province’s primary egg grading station – Golden Valley Foods – then sold half to Ontario grading company, L.H. Gray & Son Ltd.)

“We formed Fresh Start when the owners of Golden Valley indicated they wanted out and I was involved in making the deal with Gray and it has worked out well for the industry,” Janzen notes. “Gray is a fantastic partner with lots of knowledge and we now have a brand new grading station with all the latest technology.”

In March, he was elected to the B.C. Chicken Marketing Board, replacing his uncle, Dave Janzen, who stepped down from the board to become president of Chicken Farmers of Canada. It is Janzen’s second stint on the BCCMB, having served as a provincially appointed member of the board from 2007-2009.

Recognized as leaders in the making, Janzen and his wife, Rhonda, were named British Columbia’s Outstanding Young Farmers in 2005. He not only cherished the honour but also the farmers he met, and became one of the program’s strongest advocates. It should come as no surprise that his zeal for involvement and accomplishment made him president of Canada’s OYF program in March.

Jack of all Trades
Janzen’s public involvement is not limited to agricultural organizations. He also chairs the hospitality committee at his church, and the “Home Away from Home” capital campaign for Matthew’s House, a project of the Communitas Supportive Care Society. Started by Doug Froese in honour of his son, a disabled child who lived to age nine, Matthew’s House is a home for children requiring permanent 24-hour care. It is being built as part of the Campus of Care, which also includes a Ronald McDonald House and a hospice at the Abbotsford, B.C., Hospital and Regional Cancer Centre.

“The Froeses are friends of ours and we watched what they went through with Matthew, so we know first-hand just how much people in that situation need a break from time to time,” Janzen says.

A farmer first
Spending so much time in associations, one might wonder if Janzen actually farms. The answer is a resounding yes and he has the scars to prove it.

Janzen has been farming his entire life. Within a month of Derek’s birth, his father, who had been raised on a farm in the eastern Fraser Valley, decided to leave his banking job in Vancouver and buy a farm with a 20,000-bird (now 22,000-bird) egg quota. Over the years, Will added a broiler operation, which now produces 100,000 birds per cycle.

When Derek was old enough to start working, he started with the Pollen group’s (one of British Columbia’s three main processors) Western Hatchery during the summers. After graduating, he continued with Pollen, quickly moving up the ranks from a hatchery worker, to a catching truck driver, to the processing plant, to sales, and finally to marketing.

“I could have excelled with Pollen’s, but 14 years ago, an opportunity came up to go back to farming, which I had always enjoyed,” he says.

Janzen purchased a 28-acre farm about two kilometres from his dad’s and built up his own 110,000-bird broiler quota. He also took over management of his dad’s operations and owns two live chicken transport trucks.

“It all went very quickly,” he says. Although his dad’s broilers remain on his dad’s farm, he built new layer barns on his property and moved the laying hens there.

“My dad still owns the laying hen quota, but I own the barns,” he explains.

To help him run the three operations, Janzen has two full-time workers and a part-time egg picker. All wear separate boots and coveralls at each operation to ensure good biosecurity.

Biosecurity scare
Like anyone who went through the 2004 avian influenza outbreak in the Fraser Valley, Janzen knows first-hand the importance of biosecurity. He chaired the industry’s cleaning and disinfecting committee, but luckily was able to escape its most devastating effects.

“I was just outside the depopulation zone, so I was able to keep my layer flock going and we were only out 1.5 cycles in broilers. We could have kept the broilers going too but the hatchery was shut down,” he adds.

While he calls his experience as C&D chair “phenomenal,” he stresses it is one he would never want to go through again.
All three operations (his broilers, the laying hens and his dad’s broilers) are linked to a single Fancom computer system, which continuously monitors and adjusts the environment inside and outside each barn, measures feed and water intake, and tracks bird weights in the broiler barns.

The data can be accessed anywhere at any time through his iPhone.

“I can’t say enough about the advantages of technology,” Janzen says.

He calls the poultry industry an excellent business to be in. “I enjoy all the different stages of the farm: when chicks come and go, when the farms are running. It’s been a good business to be in for the past 20 years.”

But Janzen is also very much a people person, which is why he so quickly advanced to sales and marketing in the Pollen group and one reason he is heavily involved in industry associations.

“You can’t have conversations with the chickens,” he notes, adding that he has gained so much from interactions on the many associations, particularly those that go beyond the borders of the poultry sector.

For example, OYF has introduced him to outstanding farmers in other sectors and other provinces. IAF, he says “opens your eyes to what’s happening outside your industry and outside of supply management and I can now bring that back to industry.” And FIRB added perspective on how the industry works with government, which he considers crucial since, “we’re in a system which is a privilege by government.”

Future of farming
As long as we don’t let the system go because of our own mistakes, he expects supply management to have a long life span – even if it is constantly challenged in trade negotiations. “The government has made many bilateral agreements and kept supply management,” he says.

All his involvement on all those associations has not kept Janzen out of his barns, a fact proved in harrowing fashion in April. After shipping a flock of boilers and watching the trucks leave the yard, Janzen was about to pull down the roll-up door on the second floor of his barn when he noticed some manure on the lip of the doorway.

“I went to kick it away and the next thing I knew I was lying on the concrete below,” he recalls.

Although he was extremely fortunate not to have hit his head or even killed himself, he practically demolished his right arm. After doctors put in metal plates to rebuild the arm, he developed a life-threatening infection requiring several surgical rinses and a long regimen of IV antibiotics, which he was still on in early June.

“I spent five weeks in the hospital and was in the operating room 11 times. Each time I went into OR they asked the same questions and I was able to answer them by rote by the end,” he laughs.

His experience, however, proved how useful technology could be. He was able to have his laptop and iPhone in the hospital, which allowed him to keep tabs on his farms and industry affairs throughout his stay. He also has high praise for the care he received: “I can’t say a bad thing about it.”