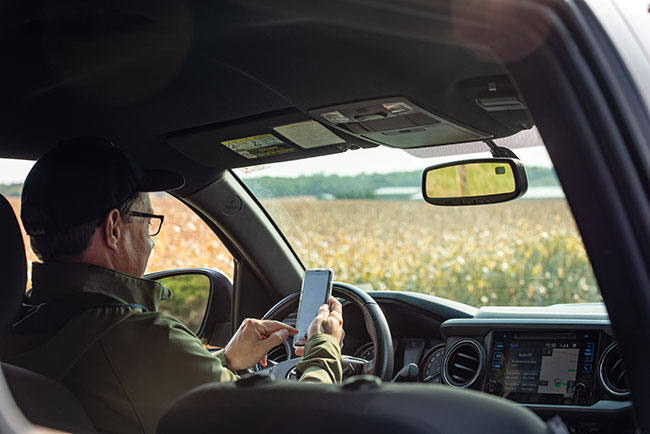 When an individual within the network approaches the farm, the system sends screening questions directly to their phone. Photo: name tkherious

Although on-farm biosecurity has greatly improved over the last few decades, it’s difficult for even the most vigilant producer to stay on high alert all the time. But as producers transition to new alternative housing options, the risk of disease increases. New disease spread mitigation technology could be the answer.

The innovative platform, called Farm Health Guardian, quickly and accurately tracks in real time and shuts down disease spread within minutes of receiving a disease symptom report. The technology could be a virulent disease game changer if it’s widely adopted by the industry and its partners.

Lessons from the past
Canada reported its first case of highly pathogenic avian influenza (HPAI) to the World Organisation for Animal Health (OIE) in 2004. The outbreak began on a broiler breeder farm in B.C.’s Fraser Valley. What started out as a low pathogenicity avian influenza (LPAI) quickly and unexpectedly mutated to HPAI.

According to reports, by the time the outbreak was brought under control more than 17 million birds were culled and more than $380 million in gross economic costs were incurred. What quickly became apparent was that in order to protect the safety, stability and profitability of the sector it was necessary to create measures to quickly and efficiently contain incidents of disease.

Since that first outbreak, the poultry industry has taken great measures to improve disease detection and control, including self-quarantine, laboratory testing, biosecurity and surveillance. But according to Tim Nelson, founder and president of Be Seen Be Safe Ltd., those measures rely on human alertness and it’s impossible to stay on high alert all the time.

How it works
Farm Health Guardian uses multiple technologies, including geofencing, smartphones and GPS, to track and record the movement of staff, visitors and vehicles in and out of production facilities in real time. The different technologies communicate with an app and provide contactless digital pre-screening, paperless check-in, vehicle passport and GPS tracking.

Nelson says Farm Health Guardian offers many benefits. It’s touchless, which eliminates transfer risk by way of hands. In the event of an outbreak, reaction time isn’t slowed by illegibility of visitor logs due to poor penmanship. It’s quick and easy for visitors to use and it’s been designed so the user can create their own set of questions.

It also draws on company protocols, Nelson says. Many companies use health pyramids or personal downtime charts, which can be fairly large spreadsheets that dictate the downtime between different properties within the network. Instead of having to update those and then emailing them to the different parties, they can be quickly and easily uploaded to the app.  They’re then immediately available to individuals within the network.

Nelson says Farm Health Guardian is an excellent option for mitigating losses from production-limiting diseases that are transmitted by people, vehicles and equipment, including avian influenza and infectious bronchitis.

When an individual within the network approaches the farm, the questions will be sent directly to their phone. The questions could ask anything from whether or not the visitor is sick, if they’ve visited another farm in the past few days or if they’ve recently travelled abroad. If that visitor doesn’t meet all of the protocols, they receive a message saying they are denied entry. That same message is sent to the system administrator and the barn manager. The system also works in drive-on drive-off situations as it remembers where the visitor has been before and when.

Administrators have control over all questions and information in the system. If they don’t want to deny entry, they don’t have to. If, for instance, a visitor has to come onto the farm, there is a system in place to override the denial.

User feedback
During a trial and development stage, Nelson received valuable feedback from the Alberta poultry sector. Many farmers, he says, were nervous about being tracked. Because of that feedback they developed a digital manual check-in option as well.

“The manual entry doesn’t rely on GPS coordinates,” Nelson says. “It just records the fact that you’ve entered the farm, the same as a paper system”

Farmers were also concerned about being blamed for carrying a disease and confidentiality if an outbreak should occur on their farm. “The only people who know about the issue are the people who are or may be affected by it,” Nelson assures. “Nobody else needs to know.” 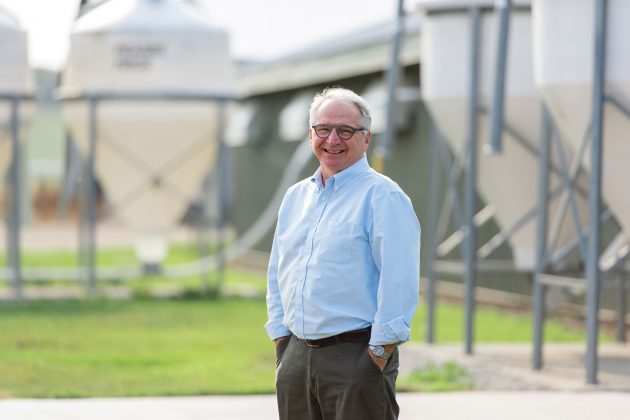 Tim Nelson is founder and president of Be Seen Be Safe Ltd., which developed the Farm Health Guardian disease spread mitigation system.

A connected world
Ideally, the network would include all moving players, including producers, feed suppliers, catching crews, egg collectors, manure haulers, barn cleaners and veterinarians. “We are inextricably connected to other farms if we are farming in 2020,” Nelson says. “It’s that connection that this whole system is built for.”

When an individual within that network gets hit with disease, within just a couple of minutes the system will be able to tell where visitors were previously and where they went after that. It will also be able to see and alert all individuals who visited any of the other flagged farms as well. Nelson describes it as the layering of an onion. “We work outwards from the index property and it’s very fast,” he says.

Proven value
The system proved its value this past summer when it tracked down the point where a disease broke on a hog farm in less than 10 minutes. The farm in question was locked down within 60 minutes. A manual track-and-trace method would have taken four to five days to complete.

If the disease had spread to a sow farm of similar size it would have cost them an estimated $750,000 to clean the disease up. “So, it does save money, it’s proven to work and it’s very fast,” Nelson says.

Collaborative effort
Nelson worked closely with Maple Leaf Foods, which played an instrumental role in the development of Farm Health Guardian. Maple Leaf Foods has since put the system to use in Manitoba’s pork sector, connecting over 230 farms and over 500 individuals. The company is encouraging all contractors to use the tool and mandating their own farms to use the tool. They are also encouraging visitors to adopt the tool as well.

Having the means to react quickly to a disease outbreak is crucial to the greater good of the industry, says Dan Di Salvo, VP of infrastructure and security at Maple Leaf Foods. “There is strength in numbers,” he says, pointing out that all players within the industry share the same challenges when it comes to disease.

Di Salvo admits, though, that challenges come with any digital disruption or transformation. As such, Maple Leaf Foods plans to focus on awareness and adoption. “I would say we have good adoption, but I think it’s also an ongoing process that you cannot neglect,” Di Salvo says.

With the development of on-farm kiosks and mobility solutions, Maple Leaf Foods expects adoption to increase, but understands that it will take time.

“It’s not about the next big thing in tech for us,” Di Salvo says in conclusion. “It’s how you use it and how you implement it with an eye to continuous improvement. So being smart, not experimental; working collaboratively, not in silos; the power of data is key and going at the right pace.

“In the end, we brought a tool to the table not just for Maple Leaf Foods but for industry and livestock businesses,” Di Salvo adds.