Poultry vet and turkey farmer a changemaker in fast-forward. 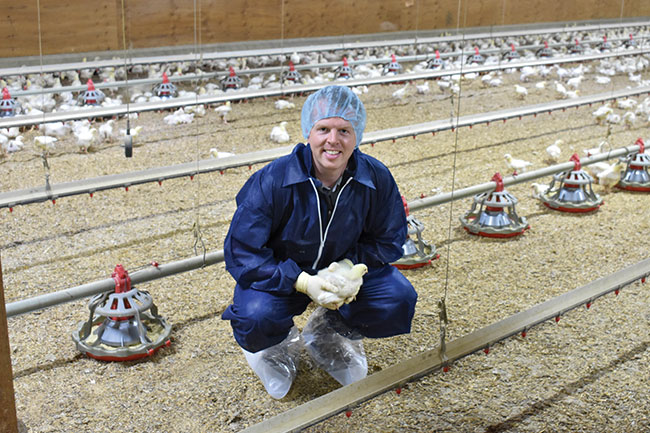 Full-time poultry vet and part-time turkey farmer Dr. Luke Nickel makes the near-impossible look, well, easy. Just four years ago, Nickel was gearing up for graduation from the Western College of Veterinary Medicine. One year ago, he completed the Master of Avian Health and Medicine program at the University of Georgia. Today, he’s a managing partner at Poultry Health Services, he’s responsible for their B.C. office and he’s fundamentally changing how B.C. poultry producers view and engage with veterinary support.

“When I hired Luke for his residency, he was really excited to do individual farm contracts with poultry producers,” says Dr. Tom Inglis, CEO of Poultry Health Services. “That’s pretty common in other parts of animal agriculture – the swine farm has a vet; the dairy farm has a vet – but it’s not how poultry works. In our industry, veterinarians primarily work for supply companies. I explained to him why it wouldn’t work, kinda letting him down gently. He came back to B.C. and he’s doing it anyway.”

In the past year, Nickel has built a strong B.C. business for Poultry Health Services, with a focus on farm-direct relationships. “He’s getting farms to pay for something they’ve never paid directly for before and they’re finding it valuable and wanting to continue it. It’s a complete paradigm shift,” Inglis says. “It shouldn’t come as a surprise to us – these are big businesses and they’re really driven to get better – but we just didn’t think it was possible.”

Nickel grew up on a layer farm in B.C.’s Fraser Valley that diversified into broilers and turkeys. Today, he helps provide vet service on the family farm alongside occasional chores. Offering farms direct veterinary support seems obvious to him, since he sees the benefits of individualized veterinary care on his own farm.

“If the supplier is paying for the veterinary consultation, it limits the amount of time a vet can spend on each farm,” he says. “We’ve faced some issues that maybe needed fuller-service veterinary support.”

Customized service
A direct relationship between farm and vet allows a vet to help customize management and care to the unique realities of the individual farm and ensures a producer can get immediate help as soon as they identify an issue. But it’s not just crisis animal health issues that benefit from veterinary involvement. Nickel says the biggest value he can add is in being part of ongoing production management discussions and decisions.

“A lot of farmers are very frustrated – one told me that they either had to improve or they were going to sell the farm,” Nickel says. “As an industry, we’ve had a lot of Band-aids over production schemes. As we reduce antibiotics, the problems that were already there in the background become more visible.”

“We put in data loggers to record things like temperature and humidity in a barn every 15 minutes. Then we graph it to show environmental controls. Instead of just telling producers it was too cold in a barn, we’ve tried to create testing that shows them that it’s real.”

Destined for poultry
Nickel’s enthusiasm for poultry isn’t new. He was the kid who enjoyed barn chores and the teen who liked talking about turkeys. “My siblings thought I was crazy,” he says. When Nickel headed off to vet school, everyone “just knew I was going to be the chicken guy”, he says.

“It’s kind of an unusual direction in veterinary school: there aren’t many of us who planned on a career with poultry. But, I’ve always enjoyed poultry husbandry, the management and the working with farmers. I really like population medicine: the diseases we work with and the strategies to control them.”

At 29, Nickel is the youngest partner with Poultry Health Services. If it seems he has missed a few steps in a normal career progression, that’s because he has. Following vet school, he jumped immediately to residency, bypassing an internship, while completing a master’s at the same time. Two years later, he was offered full partnership in Poultry Health Services.

Alongside building a practice in B.C., promoting his new concept in animal health to poultry producers and managing the B.C. arm of Poultry Health Services, Nickel is simultaneously working on a specialty turkey project with friend and co-producer, Jason Lepp.

Together, Lepp and Nickel have secured quota for 2,000 birds, found barn space, competed all production planning and confirmed the sales too. The project is unique and exciting in that Lepp and Nickel intend to differentiate their birds as specialty rather than commodity, selling them at Lepp Farm Market.

Motivated change agent
“Luke is pretty unique. He’s a crazy ball of energy. Everything is on fast-forward and he does it all with a big smile and no stress,” Inglis says. “His nickname is Lucky Luke, but his luck is mostly dedication, preparation and work ethic. He probably doesn’t think he’s doing remarkable things.”

Inglis says Nickel has a “magical” ability to achieve the impossible. “He and I were sitting on an airplane, flying out of Abbotsford Airport. We looked down and could see the B.C. Animal Health Centre from the air and, just beside it, the new WestGen Building. I made a joke saying he should get an office in the new building. A month later, they were making space for him. Why? Because he’s Luke. You point at a building from an airplane, he makes it happen.”