The effects of avian influenza this year on Canada’s duck industry have been severe. 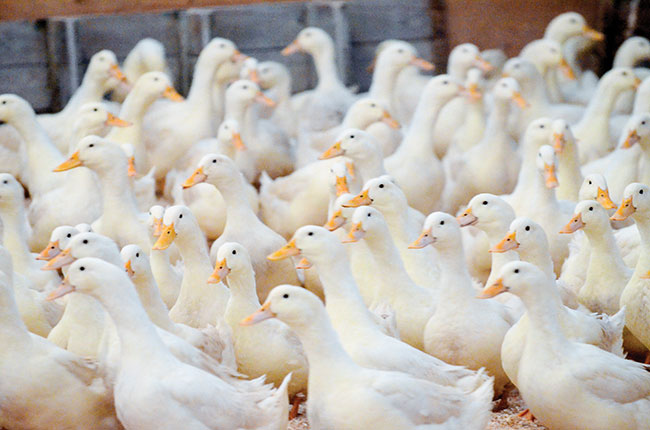 Avian influenza wiped out about 85 per cent of duck supply at Brome Lake and King Cole this past spring. Photo: King Cole Ducks

The highly pathogenic avian influenza (HPAI) strain that arrived from Europe caused outbreaks in many types of poultry operations across Canada. But it devastated Canada’s duck industry. However, its fighting spirit remains strong and a new era of extreme preparedness has begun to prevent future outbreaks.

Once the variant entered premises at Canards du Lac Brome (Brome Lake Ducks) in Knowlton, Que., and King Cole Ducks in Stouffville, Ont., about 85 per cent supply was wiped out. This significantly affected the wide variety of ethnic retail and restaurant markets served by the industry, explains Patti Thompson, director of sales and marketing at King Cole.

At this point, both King Cole and Brome Lake are well into the recovery phase and both have made very significant changes in biosecurity infrastructure and protocols. It has been a colossal effort and very difficult on many levels for leadership and staff. “The re-launch of our operations has me busy 25 out of the 24 hours in a day,” says Angela Anderson, general director at Brome Lake.

But before getting into what both operations are doing to re-launch, here’s an overview of their truly terrible experiences. First, Brome Lake.

Brome Lake
Last April, HPAI was detected in four of Brome Lake’s 13 production sites. This included its main site where parent stock was raised. Hundreds of thousands of ducks had to be euthanized and over half a million hatching eggs were destroyed, representing most of the firm’s production.

“The impact is major for the company and its staff,” Anderson says. “It has taken enormous financial effort and creativity to keep our operations going. This is a crisis situation that we could never have imagined, even though we have experienced a few disasters in during our 110 years of existence.”

After a lengthy period of inactivity, the Brome Lake team conducted a detailed evaluation of their operations and biosecurity regulations. They planned for a future in which avian influenza (AI) would be a constant threat.

“Despite the lack of cashflow that AI caused by the halt of our operations, we decided to invest in modifying the Danish entries to include showers between the dirty and clean zones in all our barns and hatchery,” Anderson reports.

“We converted two rearing sites into breeding sites to allow us greater flexibility. We also did extensive training of our management and staff on the revised biosecurity protocols.”

King Cole
It had been over seven decades since King Cole Ducks had been impacted by AI. As with Brome Lake, the outbreaks started in April and over the following eight weeks, outbreaks impacted 10 of the 22 farm locations. About 86 per cent of production was wiped out – hundreds of thousands of meat birds, breeders and eggs had to be destroyed.

“Recovery has been a six-month seven-days-a-week process to eradicate the virus in over 750,000 ft2 of space,” Thompson says. “Our heritage site is home to our admin office, federal-compliant processing plant and three grower barns. When one flock was hit with AI, it quarantined the entire address.

“We were forced to demolish non-infected barns that couldn’t be cleaned and disinfected quickly enough to allow our processing plant to operate and protect the welfare of healthy flocks. We were forced to lay off 50 per cent of our plant staff during the crisis and redeployed farm and maintenance teams to try to keep staff employed.”

As at Brome Lake, King Cole made significant biosecurity infrastructure and protocol changes. The firm will no longer farm ducks at its 100-acre heritage site to ensure the processing plant is never again in jeopardy. The company moved from a very efficient system of shared teams for wash, vaccination and overall management to a siloed system of one manager per farm and dedicated equipment.

“The viral load in our region was significant so we have recognized the need for a wider geographic placement,” Thompson says.

“It’s not as efficient but reduces risk. This requires a significant change in transportation system from open wagons to modules, allowing humane transportation at greater distances.”

The firm is also in the process of sourcing contract growers throughout the province and has added a formalized audit program.

In addition, the company will expand its use of technology that was extremely helpful during this crisis to track and trace AI to reduce traffic in and out and on its farms.

Thompson reports that they were back to 50 per cent production by mid-November and she expects a return to full production by spring 2023. 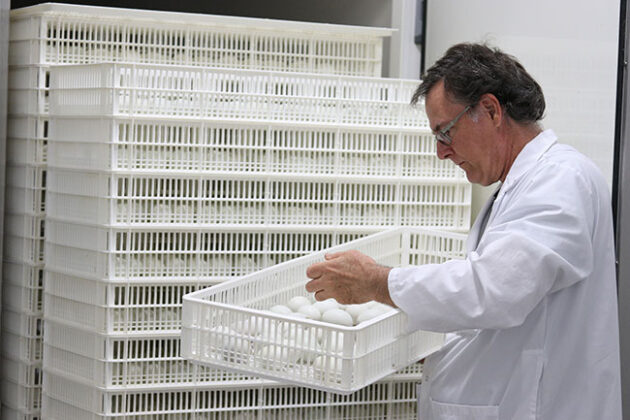 Brome Lake had to destroy over half a million hatching eggs, in addition to the hundreds of thousands of ducks it euthanized.
Photos: Brome Lake

However, Thompson says that her staff’s experience with the teams at Canadian Food Inspection Agency (CFIA) was very positive. “CFIA assigned a case manager who helped us navigate the hundreds of requests and requirements from revised standard operating procedures to daily updates, meetings, questions, concerns, etc.,” she says.

“These managers kept the timelines organized and helped us connect with senior and national level operations, policy, veterinarians, etc. Because our outbreaks and recovery were stretched over months, we rotated through a number of different case managers who not only cared for our file but cared about us. Continuity was impressive. It is an excellent model and was essential to us being educated, understood and heard.”

She adds that although duck production is generally outside its purview, she praises the Feather Board Command Centre in Ontario. “They did an incredible job of communicating to the poultry industry as a whole through the crisis. They were instrumental in understanding that we are in this together and supported bringing the duck industry to the table in discussions around recovery. All stakeholders need to be part of AI conversation at federal, provincial and industry levels for the benefit of Canada’s food supply.”

In addition, strong partnerships with banks and suppliers allowed King Cole to manage through this crisis as it recovers and rebuilds. Thompson praises their understanding and appreciation for the industry, which allowed company leadership to make significant decisions and changes.

Support for industry future
Both Anderson and Thompson have come to some solid conclusions about the future direction the duck industry needs to take after this year’s crisis. “Nothing will ever be the same again on many levels,” Anderson stresses. “You have no idea what this can mean in terms of biosecurity alone. Colossal investments are required.”

She adds, “We still believe that our industry has a bright future ahead of it if everyone pitches in.” But she notes that “we have already taken our large share of investment and involvement. It’s now the turn of our governments to get involved if we want our industry to grow and if we want to reduce duck imports from Eastern Europe and elsewhere. If food autonomy is an important value for our society, we must work together, especially in times of crisis.”

Thompson highlights building of the industry’s influence. “Our industry is small and so is our voice,” she says. “We didn’t know who to call or who to count on to help us through this crisis, whether it was with funding opportunities, guidance or questions. The Canadian Waterfowl Producers Association will work together to add members (interested waterfowl producers please contact us) and step into a more vocal role to share the importance of the duck industry in food security for Canadians.”

She adds that because AI will hit again, it’s critical that industry and government continue to learn from each other and each outbreak. “Hotwash [immediate post-event discussion and evaluations] by industry and government is extremely important for continued improvement and all stakeholders need to be at the table,” she explains. “Let’s learn from other countries. Research and practices done in AI-impacted regions through the U.S., Europe and Asian can help guide us.”