The economy is starting to resemble Saskatchewan’s weather 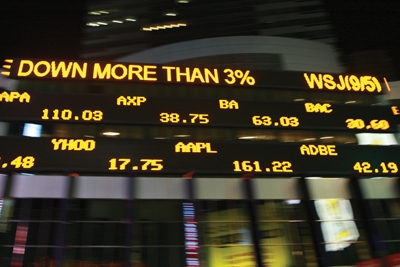 BEST AND WORST OF TIMES: Economic uncertainty has spilled over into farming, resulting in “an era of elevated shorter-term volatility in virtually all aspects of farming,” says a TD report.

There’s a saying in Saskatchewan that goes, “If you don’t like the weather, wait an hour.”

The implication and the reality is that in the summer, Saskatchewan’s skies can go from rain, to sun, to hail, to calm, to gale force winds — and that’s all within the same day.  But the long-term forecast is generally pretty good, calling for lots of sunshine.

The TD Bank’s economic forecast for agriculture reads something like that. It says farmers’ long-term prospects are bright, with unprecedented opportunities, but the near term is likely to be unpredictable and volatile.

The unpredictability and volatility are coming from all directions. Among the factors are the global economy, unsettled weather patterns, investor interest in commodities and insecure consumers.

Farmers can cope with the uncertainty but it will take planning, TD says. This can include a number of smart strategies such as hedging, ensuring credit is in place before it is needed, and using reasonable interest rate assumptions when assessing investments.

In its annual agriculture forecast, TD says that “Canada’s agriculture sector has been enjoying a revival since 2006, underpinned by booming emerging market growth, strong overall global food demand and relatively high prices. With many of these positive longer-term factors expected to remain in place, this period of unprecedented opportunity for the nation’s crop and livestock farmers is likely to stretch out over the foreseeable future.”

However, challenges remain. Chief among the challenges is unpredictability.

Speaking at an agriculture outlook meeting in Delhi, Ont., in December Dina Cover, a TD economist. said TD is continuously assessing its forecasts and as 2011 came to a close the volatility and unpredictability was growing.

Europe was searching for solutions to severe debt problems plaguing Greece, Italy, Spain, Portugal and Cyprus. These problems were spilling over into France and threatening to undermine the Euro. There is the possibility of a European recession, particularly if austerity measures designed to rein in government debt undercut overall growth. If Europe falls into recession the impacts will spread.

The United Kingdom, while not a member of the European Union (EU), was struggling to deal with a stalling economy and debt, and even Germany faced the prospect of slower growth.
Meanwhile, economic growth in China (which was still growing strongly, compared with other nations) was slowing.

The United States “is very, very fragile” struggling with slow growth, high unemployment, high personal and public debts and a political stalemate, she said. There are also persistent calls for cuts in government spending at municipal, state and federal levels. If such cuts occur, they “could tip the economy further down. It would be better to delay spending cuts beyond 2013,” she said.

Canada came out of the recession stronger than most other developed nations but the economy is now slowing and job growth is stalling. If the situation deteriorates it may require action by the Bank of Canada and the federal and provincial governments.

All the uncertainty has spilled over into farming, resulting in “an era of elevated shorter-term volatility in virtually all aspects of farming,” the TD report said. “Such volatility is characterized by larger-than-historical swings in market prices for agricultural products, as well as most other commodities, foreign exchange rates and input prices.”

When this is accompanied by increased investor participation in commodity markets and unpredictable weather patterns the result is “the best of times and the worst of times for Canadian agriculture producers.”

For the next two or three years, grain prices will likely remain elevated because of tight supplies and strong demand, the report said.

“Looking further out, there are several factors that will help to keep prices on this higher plateau. Population and income growth in emerging markets is expected to remain strong, leading to ongoing consumption growth for agricultural commodities – animal products in particular,” the report said.

“While demand continues to grow, supply may not be able to keep pace. According to the OECD, yield growth has decelerated over the past 10 years and is expected to slow even further in the upcoming decade. In all likelihood, Mother Nature will continue to limit supply growth, not just through adverse weather conditions, but through water shortages, as already experienced by some countries, among them Australia. As a result, the global stocks-to-use ratio for several agricultural commodities is likely to decline.”

Limited growth in supplies coupled with rising demand, should underpin higher prices. But higher prices may not mean higher farm incomes. “We are not predicting an income boom in the overall farm sector,” the TD report said. “Input costs are likely to grow in line with farm prices, limiting growth in net incomes. In particular, energy prices are also expected to remain elevated, driving up both costs on farm as well as transportation costs.”

A strong Canadian dollar appears here to stay, limiting demand and prices for Canadian-grown products. This makes it “crucial for Canadian producers to expand their export markets beyond the U.S. as well as into niche markets that offer opportunities to charge premium prices.”

In addition to the squeeze from rising variable input costs, farmers will continue to face higher land costs. A positive factor is low interest rates, which are expected to continue for some time. The Bank of Canada is expected to keep its overnight target rate at 1% until early 2013, keeping a lid on retail and commercial borrowing rates. This provides Canadian farmers with the opportunity to invest in productivity-enhancing machinery and equipment.

Watch the weather
As every farmer knows, even the best-laid plans can be savaged by extreme weather.

“Weather conditions have become more variable, while the number of natural disasters globally has been on the rise,” the report said.

Extreme weather can have a dramatic impact on prices. Commodity markets tend to react to severe weather by initially fearing the worst, then recover some stability when a clearer picture of the extent of the damage is seen.

But a clear picture can be hard to find. Huge swings have become common for USDA estimates, resulting in equally large swings in prices and farmer seeding intentions.

These swings can be intensified global investors. It is estimated that as much as US$300 billion is currently invested in commodities through vehicles such as exchange traded funds.
These “non-commercial net long positions on the Chicago Board of Trade remain quite elevated for crops, and the picture in the livestock sector is similar.” A case can be made that this financial-market speculation can lead to more violent short-term price movements. For example, “when investors get nervous, they pull out of investments that they perceive to be riskier, including commodities.”

Coping with volatility
With the volatile environment likely to persist over the next few years, smart strategies can be put in place to help protect against these swings, TD says.

Agricultural Prospects Brighten
In 2012, the Canadian agricultural sector is projected to expand at a rate near two per cent, with livestock taking the lead as producers respond to still-favourable prices, according to a forecast from BMO.

Much of the lift for livestock will come from continued strong demand from Asia. In particular, the planned reopening of the South Korean market to Canadian beef will stimulate sales, and pork exports to Asia should continue at a brisk clip. Meanwhile crop production should grow by about 1.5 per cent if planted acreage and yields “regain a semblance of normalcy and prices remain attractive.”

Further out, agricultural production should expand at annual rates between two per cent and three per cent, above its trend of the past several years. Continued price strength should support further increases in crop production. The prices of major grains and oilseeds are expected to remain above historical norms and to trend higher amid robust demand from developing countries, continuing expansion of biofuel production globally and increasingly scarce resources (for example, arable land, water). Meat demand is also projected to grow briskly, as expanding populations in fast-growth developing countries broaden their diets, which would be positive for both livestock and crop producers. Agricultural production should also be promoted by the growing demand by advanced-country consumers for products embodying a range of attributes – related, for instance, to health, environmental sustainability and food safety – that offer scope for increased value-added, as well as by the development of niche markets (for example, greenhouse vegetables, organics and specialty crops).

Challenges
In order to capitalize on favourable demand and price prospects, farm operators will have to deal with a number of challenges. Input prices (for example, for energy, fertilizer, and feed) rose sharply over the past year and are likely to remain high and variable by historical standards, the BMO report said.

The loonie’s strength will continue to constrain exports, production and profitability, especially in those segments that are heavily reliant on foreign markets. Canadian farmers may also have to contend with trade restrictions related to plant and animal diseases, allegations of unfair trade, and food safety concerns amid increasingly global markets, which all raise border closure risk. These challenges compound the inherent variability of agricultural production.

Keys to Success
To adequately address these challenges, Canadian farmers must continue to reduce costs through increasing scale, technological advances and better organization. They also have to boost value-added by catering to shifting customer preferences. Scope to add value exists, for instance, in organic production and supplying local markets. With regard to the latter, advanced country consumers are increasingly interested in knowing, and being able to relate to, the sources of their food. Moreover, farmers must continue to diversify their markets and, especially, to boost sales to fast-growth markets, where income gains are lifting demand, BMO said.

Agriculture has shown remarkable adaptability, evident in superior productivity growth, rising export orientation, a shift in output mix toward value-added products, and the launch of new enterprises (for example, greenhouse vegetable production, specialty crops). Specifically, with respect to new enterprises, greenhouse vegetable production has expanded rapidly – in Ontario, Quebec and British Columbia – and specialty crops (for example, pulses) are altering the Prairie agricultural landscape. These trends must hold for the sector to enhance its competitiveness.
Specifically, it is critical for farmers to further boost productivity. Competition is intensifying as “non-traditional” producers (for example, Brazil, Argentina and Russia) make inroads into global markets. In addition, sophisticated risk management strategies will be needed to address volatility in input and output prices, production and profits. Given the need for ongoing cost reduction, innovation, market diversification and risk management capacity, consolidation is likely to continue, leading to larger, more capital-intensive and more complex operations, according to the BMO report.

The Bottom Line
The agricultural sector struggled to make headway in 2011, even with a favourable demand and pricing environment. An expected decline in crop production will largely offset a robust gain in livestock. Next year, activity should strengthen as growing conditions improve and crop yields return to more normal levels. The sector should continue to expand over the medium term at annual rates above the trend of the past several years. Factors supporting the sector’s growth include brisk population and income gains in emerging markets, rising global biofuel production, and consumer concerns about health, the environment and food safety, which are promoting value-added activity throughout the supply chain. However, in order to benefit, Canadian farmers must further enhance their competitiveness and risk-management processes.