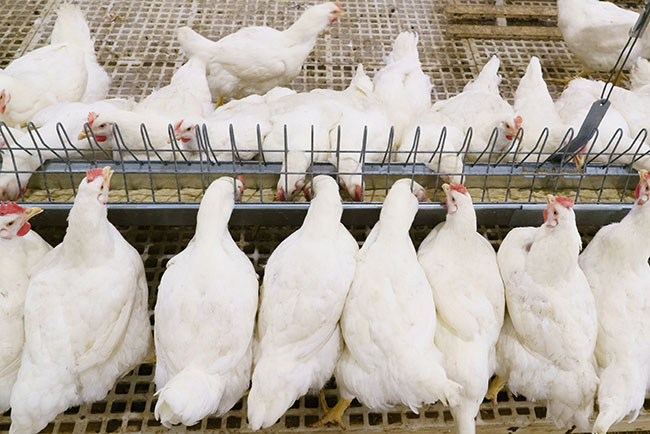 Experts say there’s a gap between the genetic potential of broiler breeds and management realities, which they hope to address with a new multifaceted program. PHOTO CREDIT: Big Dutchman

Over the past 60 years, broiler genetics have improved dramatically, resulting in leaner, faster-growing, more efficient birds. However, because broiler breeder management research is so expensive and complex, technologies and practices haven’t kept pace with genetic improvements. The result is that the toolkit of management practices producers rely on today is nearly identical to what their predecessors applied decades ago.

The gap between genetic potential and management reality translates to breeders coming into production late, poor flock uniformity and fertility challenges: all lost opportunity for producers and inefficiency for the industry. Alberta’s Poultry Innovation Partnership (PIP) wants to change that.

In late June, PIP launched the Feeding Breeders Summit: a bringing together of the brightest minds in broiler breeder research and production from around the world. The initiative featured an eight-week webinar series of presentations by world-renowned experts in broiler breeder production.

Once a collective baseline of knowledge was laid via the webinars, participants gathered in-person in Canmore, Alta., and online for a two-day summit at the end of August. Working together, they charted a path forward for broiler breeder production.

“What we’re facing today is birds that are much less resilient: they’re much more susceptible to any kind of disruption or stress and they don’t always respond to stimuli like lighting in a way that we expect them to.

“People use the analogy that broiler breeders have become like Ferraris to manage. They’re very high maintenance. They need a lot of attention. Given very narrow margins, that decreased productivity is a real problem. We all know the issues, but – until now – we haven’t been collaborating.”

In November last year, Carney pulled together an organizing committee from various parts of the broiler breeder industry. Initially, they thought they could pull off a simple conference event by February. However, their vision and reach soon grew.

“At the beginning, we were just talking about Alberta and then we started talking about expanding to all of Canada. Then, Val took that vision and made it grow to something even bigger,” says Jeff Notenbomer, a broiler breeder producer from Southern Alberta, chair of the Alberta Hatching Egg Producers, a director on the Canadian Poultry Research Committee and former PIP chair.

Bigger, indeed. The one hour per week webinars, which took place over eight weeks between June and August, featured nearly 20 leading geneticists, veterinarians and avian scientists from Canada, the U.S., Europe and beyond. Presentations covered multiple perspectives on broiler breeder feeding and productivity, from nutrition and gut health to genetic advances, disease and more.

“The plan from the get-go was always that it was going to be a summit, but we started to realize that there’s so much information and it’s so interrelated that there’s no way we could cover it in just a couple of days,” Carney says.

“The webinars were kind of the educational component leading up to the more collaborative component, which was the summit.”

The summit itself drew together participants’ expertise to identify feeding issues, explore best practices and prioritize research objectives to sustain the future of the industry.

The event’s value was much less about specific takeaways and production strategies and more about future potential derived from new relationships, fresh collaborations and aligned agreement for research.

“One of the biggest positive results for this summit was that we started to develop a network so we can consider different perspectives, learn from each other and start to grow a community,” Carney says. “A lot of us in this industry are getting on in our careers. Part of the importance of this summit was finding a way to start future proofing: working together and collaborating to get more out of research projects than each of us individually can do and building for the future.”

“It’s more than just putting information out there: what we meant by mobilization is really about the collaborative effort to get research into on-farm practice,” Carney says.

Martin Zuidhof, a professor of poultry systems modeling and precision feeding at the University of Alberta and a member of the summit’s organizing committee, says coming to strong consensus on two research priorities – the improving of uniformity within flocks and the improving of grading for more targeted feeding – has him excited about the future.

“I’m working on those priorities myself daily, so it’s gratifying to see that I’m not alone. Stay tuned. These are themes that resonate and now there is a list of people who are committed to making progress towards solutions. We won’t have solutions immediately but we’re well on our way to a more integrated approach to arriving at solutions.”

While the big picture priorities may offer industry the longest term and most meaningful difference, countless ideas and takeaways from individual presentations and discussions “really got my brain going,” Notenbomer says.

He says he was particularly interested to hear how different countries handle similar challenges. Contrary to many Canadian farmers’ focus on technology, some of the very biggest productivity gains being made in other parts of the world aren’t being realized because of high tech tools, artificial intelligence or automated management.

“Some countries have way cheaper labour forces than Canada. With more labour, there’s a lot of potential of what you can make birds achieve,” Notenbomer explains.

“While that’s not always possible in Canada, the discussion definitely opened my eyes to what’s possible if you put in the hours in terms of feeding them and sorting them for improved uniformity. The numbers that some countries are putting out are pretty amazing.”