By opening their doors to those who wouldn’t otherwise see an operational layer farm, Alberta’s egg producers are helping to build support 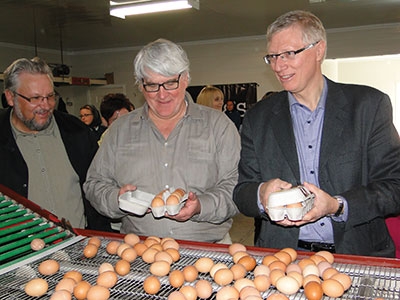 From left to right: Ben Waldner (chairman of EFA’s board of directors), MLA Dorward and MLA/Minister Olson at Big Bend Colony in August 2013.

In August, the Egg Farmers of Alberta (EFA) continued a series of tours involving the province’s egg farms. Topics ranging from supply management and food safety to animal welfare and egg nutrition have all been discussed during the series of tours.

In 2011, Alberta’s egg farmers generated $54.3 million in farm cash receipts, while the egg industry (farmers and graders) created more than 1,600 jobs in Alberta, contributed $174 million to the GDP and paid $20.5 million in federal, provincial and municipal taxes.

“These tours build on the success we had when we hosted our first egg farm tour, back in August of 2012, at New York Colony near Lethbridge,” says EFA marketing and communications manager David Webb.

“It’s an opportunity for some of our province’s 156 egg farmers to host politicians from all levels – federal, provincial and municipal – onto their farm, along with media representatives. Our farmers are able to share a little about what they do and how they do it, which fits well with the public’s desire to know more about where food comes from and how it’s produced.”

The first EFA tour of 2013 was held in May at Rosalind Colony, which is located in the Camrose area. Those in attendance included Verlyn Olson, minister of agriculture and rural development and MLA for Wetaskiwin-Camrose; David Dorward, MLA for Edmonton-Gold Bar; Dave Burdek, executive director of the Policy, Strategy and Intergovernmental Affairs Division; as well as Freda Molenkamp-Oudman and Mike Pearson of the Agricultural Products Marketing Council, which falls under Alberta Agriculture and Rural Development.

Big Bend Colony was established in 1920, and includes 93 men, women and children. They operate an egg farm with 20,000 laying hens, a 90-cow dairy farm, a 550 farrow-to-finish hog operation, and a feed mill where they mix all of their livestock feed. They also have 10,000 acres under cultivation. In addition, the members raise vegetables for their own consumption, and sometimes sell excess at the Calgary farmer’s market. A little manufacturing, custom and repair work also happens regularly.

Joe Kleinsasser, vice-president and second minister at Big Bend Colony, as well as vice-chair on Egg Farmers of Alberta’s board of directors, noted that while their 20,000 laying hen operation is fairly large by Alberta’s standards (where the average flock size is 12,000), it is considered small in U.S. terms.

“Thanks to the uniquely Canadian system of supply management, our small family farms can still thrive,” he said. “If you compare our farm size to the United States, where some single farms have more birds than we have in all of Canada, you can see we are actually pretty small.”

Kleinsasser welcomed tour guests by sharing personal experiences. “I can tell you that you will be surprised at what goes into producing an egg,” he said. “Even with my experience on the farm, when I joined the EFA Board, I was amazed at the care and complexity it takes to produce a quality egg!

“Producers in Alberta are committed to caring for their hens and their environment while producing a high-quality, healthy and safe egg for Albertans. There are an amazing number of challenges and new ideas to explore in the egg industry. It is truly an adventure being an egg farmer.”