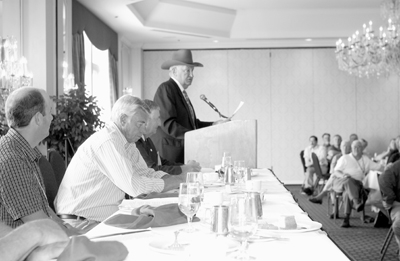 The Honourable Eugene Whelan stands at the podium to address the audience at the National Egg Producer Conference in Halifax, N.S. The Honourable John Wise (seated forefront) also spoke at the conference

The Honourable Eugene Whelan and the Honourable John Wise were recently recognized at a celebration of the 30th anniversary of supply management in the Canadian egg industry at the National Egg Producer Conference in Halifax, Nova Scotia, July 7. The Canadian Egg Marketing Agency honoured the former federal agriculture ministers for their roles in developing and maintaining supply management in the egg industry over the last 30 years.

Q. What were the problems that supply management was intended to address?

The key issue was that the marketing system was chaotic, especially for perishable products. The principle was to provide some kind of stability to the overall economic situation. Feed businesses and farmers couldn’t pay their bills; egg prices fluctuated up and down. On a cold day, the eggs would go up in price; on a hot day, the eggs would go down in price, destabilizing the income of farmers. In the chicken and egg wars, whole truckloads of eggs were destroyed to keep the market from being flooded. Even the judge who presided over the inquiry examining the system said he could not imagine a system of marketing that was more chaotic. So, we showed farmers how to make a decent profit by producing so many dozen eggs in a supply-managed system and from there, it’s history.

It grew out of the instability that existed in the milk industry; with prices fluctuating up and down, there was considerable uncertainty. So the driving force was to stabilize that market. At the time, Bill Stewart, the Ontario agriculture minister, was the leader in the formation of the Ontario Milk Marketing Board, which is really the beginning of the dairy policy in Canada, and other provinces followed. The system balanced supply with demand and built on a cost-of-production formula. The price of the product bore a direct relationship with the cost so that there were not large margins, but a small profit margin for the producer.

Q.Why did it happen in some commodities but not in others?

In some commodities the movers, shakers, and thinkers recognized the fact that they had a commodity that can be supply-managed and that’s basically because their intention is to supply the domestic market and they pay very little attention, if any, to export markets. There has been a bit of an attempt in some isolated cases for other commodities. Take for instance the grain business where probably 80 per cent of the grain produced in Canada is exported, or pork where there is so much movement back and forth across the border. Supply management just does not fit these industries.

Q. What were the advantages of the supply-management approach?

In other commodities, prices are up and down like a yo-yo and in most cases the profit comes at the expense of the producer. The whole principle of supply management is producing what the market will bear, especially when you’re dealing with live biological entities – perishable products. You can’t just produce products and hope to God that somebody’s going to buy them. I come from an industrial area. You can put metal products outside no matter if it’s 110 or 130 degrees outside. Then, if the market won’t absorb them, lay off your employees and pay them 90 per cent of their wages through unemployment insurance for not producing anything. We don’t do that in supply management.

Q. When you reflect back on more than 30 years of experience with supply management, is the reality today what you would have expected?

When I drive around Ontario, I remember those communities 40 or 50 years ago. You didn’t see the nice farms and well-kept homesteads. It makes me proud to think “maybe I had a little bit to do with it.” We put a program in there that helped them pay for their farms and make a decent living for their families. Those people took the initiative and made investments in their farms. I don’t think there’s any part of North America that has a better agriculture environment than we do here in Canada.

If it hadn’t been for Prime Minister Pierre Trudeau backing me, it would not have happened at all. I also had some of the best civil servants, all agriculture-trained and educated. S.B. Williams, the deputy minister, never worked for anyone but Ag Canada, except when he served overseas in World War II, and then he came back to Ag Canada. He was like a big walking computer; he knew all the international, provincial and federal laws.

Yes, absolutely. It has provided stability to the producer and the processor and it has continued to provide high-quality, reasonably-priced food to the Canadian consumer. So, it’s really been a win-win-win situation. The other thing that hasn’t changed is the fact that supply management is always under attack. In my comments in Halifax, I said the only thing they have to fear is the fact that self-destruction is possible and they’ve got to continue to defend the system and continue to explain it. They’ve carried the flag and carried the day for the last 25 to 30 years. They should continue to support the leadership that’s managing their systems.

Q. Do you really think that given WTO and where trade is going, it’s realistic that supply management will survive?

If we have strong leadership and a government that’s in favour, then I think it will survive. I think the drastic ways that the world has changed since 9/11 will change a lot of people’s positions on globalization. I call it “gobble-ization” because by the year 2010 we could have a few companies in the world controlling over 80 per cent of the food production, processing and distribution. That’s a very dangerous thing, going back to feudalism in a new, high-tech environment. My worry with the WTO is that democratic countries will lose the right to have any say about how we should market our products; that our parliaments would become insignificant.

I think so. The challenge is to have tariffs to maintain the system. Farmers of supply-managed commodities must continue to make their case to the government that they have an excellent system, not unlike General Motors or Ford or Chrysler or Bombardier where they also have to control inventories. Farmers in supply-managed commodities do this without government subsidy, and that’s the case they’ve got to make and hopefully the government will continue to maintain it.

Q. You were a supporter of supply management at a time when the government was negotiating free trade, so what kind of challenges did you face within your own cabinet?

Well, cabinet support was pretty good and also the prime minister had an uncle who was in the turkey business, so that helped. The prime minister recognized the value of the system – you’re supplying very little, if any, subsidy money to supply-managed commodities and yet you were dumping billions of dollars into the grain business because of low world prices. We also had a large rural caucus, and we had the good fortune of having a fairly large contingent from rural Quebec, which was helpful. We had good negotiators in the Free Trade Agreement with the U.S., particularly Simon Reisman, who followed the direction of the minister and the government. A lot of people said it couldn’t be done, you could never get it done. Washington will never accept it; well, Washington did accept it.