Quebec producer does not regret the switch to enriched cages 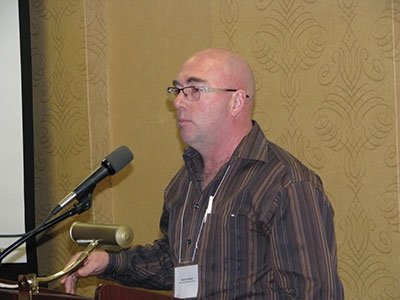 Having taken his cue from Europe and switched one of his barns to enriched cages, Maurice Richard shares with others his experiences with the new system.

In 2011, Maurice Richard became the first egg producer in Quebec to use enriched cages on his poultry farm. Two years later, he says he never wants to go back to conventional housing.

It all began when he set off to western Europe in 2010 to tour poultry farms and study the newly installed enriched cage systems mandated by European Union directives. Upon his return, Richard, an egg producer with 76,000 layers on two farms in Rivière – Héva, Que., decided to demolish one of his own bird barns (circa 1975) housing 25,000 layers, to make the transition from conventional to enriched cages the following year.

Richard now operates an enriched cage production system on two floors, with three decks on each eight-foot floor that is ventilated through a forced-air system in the roof.

The layers like their enriched cages, says Richard, adding that 90 per cent of their eggs are laid in the nesting boxes.

“Each hen will lay more eggs if they have more space in the cages,” he adds. “You have to achieve a balance with the cage’s population density.” With this new system, each cage can contain 60 white birds or 48 brown birds.

Richard installed LED lighting in some scratch areas in the cages, leaving a darker area of the cage available for the layers’ nests. He also programmed his LED lighting for artificial sunrise and sunset to stimulate the productivity of his hens.

He told the Nova Scotia Egg Producers (NSEP) that he chose to heat his new layer building because he wanted to dry the layers’ manure, “The eggs they lay are very clean,” he says. “The enriched cage system seems to lower bird mortality.”

Productivity in the enriched cages is better than in conventional cages, with about 338 eggs per hen over 52 weeks of production, Richard estimates. The new cages are in a building that is 86.5 metres (284 feet) long and 13.7 metres (45 feet) wide, and each cage is approximately 1.2 metres (four feet) by 11.8 metres (39 feet).

“With the enriched cages it takes longer to clean the building because it’s bigger than the building it replaced,” he says. “Because there are more birds housed, it also requires more poultry feed.”

This year, he plans to tear down a second barn that holds conventional cages and replace it with another new structure holding enriched cages. The price per layer, not including the cost of foundation and footings, will be about $42: $17 per enriched cage and another $25 for the building itself.