Eric Meek, one of the founders of organized poultry marketing, not just
in his native Nova Scotia but also across the country, was honoured in
October when he was inducted into the Atlantic Agricultural Hall of
Fame, at Nova Scotia Agricultural College, Truro. 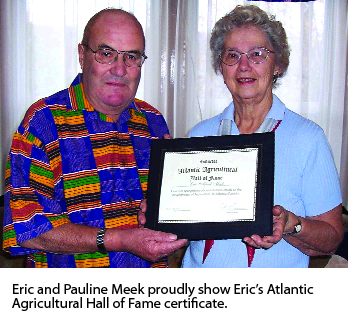 Eric Meek, one of the founders of organized poultry marketing, not just in his native Nova Scotia but also across the country, was honoured in October when he was inducted into the Atlantic Agricultural Hall of Fame, at Nova Scotia Agricultural College, Truro.

Born in 1933, he grew up on the family farm in Canning, where he attended local schools. Upon graduation from Nova Scotia Agricultural College in 1954, he returned home to farm with his father full-time. They formed a partnership under the name of L. B. Meek and Son and over the years raised layers and broilers; grew potatoes, peas, beans, forage and grain; ran a beef feed lot; and operated U-picks for vegetables and strawberries.

Meek believed in the future of the agriculture industry and became active in its organization. In 1962, he was elected president of Kings County Federation of Agriculture. Later he served on many committees and boards, including the Pea and Bean Marketing Board, Potato Marketing Board, Vegetable and Potato Producers Association, and the Farm Labour Committee.

“Eric Meek has always been a man to become involved in both his industry and his community and has always given of himself in order to make a difference,” his citation reads.

Meek was a founding member of the Nova Scotia Chicken Marketing Board in 1966. A strong voice of the province’s chicken farmers, he served on the board for 24 years, 11 as chairman.

A longtime advocate of producer-controlled marketing of farm products, he assumed the chairmanship of the Canadian Broiler Council at a time when an effort was being made to establish a national system of production and marketing management for chicken in Canada.

In 1977, he spent much of his time travelling across Canada promoting the formation of a national chicken agency. His hard work and determination paid off when the Canadian Chicken Marketing Agency (now Chicken Farmers of Canada) was formed in 1978. As a testament to his leadership, Meek was elected the agency’s first chairman.

Also a strong community supporter, Meek has been a member of Canning Volunteer Fire Department for over 40 years, part of the time as chief. He was on the village water commission, served as moderator of Canning United Baptist Church, and was a director of Valley Credit Union and Annapolis Valley Funeral Home Co-op.

In 2004, Meek was recognized by Canadian Poultry as one of the top 50 most influential people in the Canadian poultry industry.

Eric and his wife Pauline (McMahon) have four children, two of whom are currently involved in the family farm business.

This year’s Nova Scotia inductee was nominated by the Chicken Farmers of Nova Scotia for his contributions and leadership in the industry. Other 2005 inductees were: Howard Morry, Newfoundland and Labrador; Wallace Wood, Prince Edward Island; and Richard E. Melanson, New Brunswick.

The Atlantic Agricultural Hall of Fame was established in 1968 by the Atlantic Livestock Council as a means of honouring individuals in Atlantic Canada for their contribution to the development of the livestock industry in the region. Over the years, the scope of the organization has expanded and now includes all segments of the agricultural community throughout Atlantic Canada.