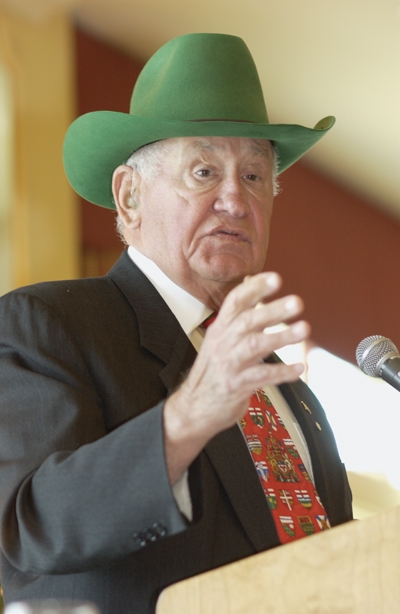 Eugene Whelan was born in 1924 in Amherstburg, Ontario and held the federal constituency in Essex South/ Essex-Windsor. He became a mixed farmer and also trained as a tool and die maker. Whelan held a number of positions including director and president of Harrow Farmers Co-op, director of United Co-operatives of Ontario, the Co-operators Insurance Co. and the Ontario Winter Wheat Producers Marketing Board, and he was president of Essex County branch, and board member of Ontario Federation of Agriculture.

Whelan learned about grassroots democracy from his experiences in municipal politics, working his way from the local separate school board in 1945 to township council and the Essex County road committee in the 1950s and eventually serving as warden of Essex County in 1962. After an early defeat in the provincial election of 1959, he was elected MP for Essex South in the general election of 1962 and held the seat until he retired from politics.

Agriculture and resource issues were Whelan’s consistent focus as an MP; he became involved in politics because “he wanted farmers to have a bigger say.” He chaired the House of Commons’ agriculture committee (1965-68) and served as parliamentary secretary to the minister of fisheries and forestry (1968-70). After the 1972 election he was appointed minister of agriculture, a post he held for the next 12 years, except for the nine-month tenure of Joe Clark’s Conservative government in 1979-80.

Whelan took a particular interest in international parliamentary and agriculture organizations, representing Canada at the founding conference of the United Nations World Food Council (1974) and serving as its president (1983-85). As both a minister and an MP, he was active in foreign aid and agricultural development issues and participated in several trade missions and in conferences of the Organization for Economic Co-operation and Development (OECD) and the Food and Agriculture Organization (FAO) of the United Nations.

Whelan ran unsuccessfully for the Liberal leadership in June 1984. He decided not to contest the 1984 election and became an agriculture and agri-food policy consultant, continuing his involvement in international agriculture issues. On his retirement in July 1984, he was appointed the first Canadian ambassador and permanent representative to the FAO in Rome.

His appointment was cancelled by the Conservatives that October because they felt it was an example of Liberal patronage.

Whelan, “The Great Canadian Farmer,” was made an officer of the Order of Canada in 1987.

He accepted a Senate appointment in August 1996.

Whelan was committed to supply management and marketing boards, particularly for the dairy industry.