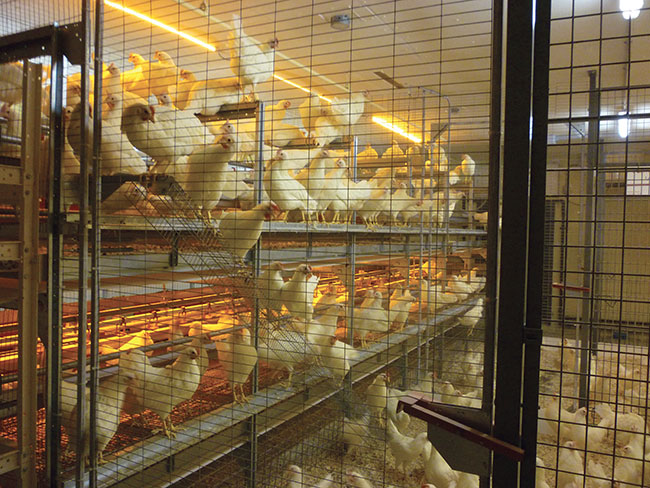 Inside the aviary at the University of Guelph’s poultry research facility. PHOTO CREDIT: Dr. Tina Widowski

Maternal stress can have a big impact on laying hens even before they are born – and recently released research from the University of Guelph has identified a breeder hen’s age as a big contributor to that impact.

The study of maternal effects – how what happens to the mother during pregnancy or just before egg laying affects her offspring – is not new, but this study, led by Dr. Tina Widowski, professor at the University of Guelph and Egg Farmers of Canada chair in poultry welfare, is believed to be one of the first to explore how this happens in commercial layer flocks.

“In the wild, a bird prepares her offspring based on her environment through changes in hormones or nutrients deposited in the egg and through epigenetic changes, where genes are turned on and off,” Widowski explains. “We’ve never explored how it happens in layers, but it could explain some of the variability that producers experience from flock to flock with the same genetics, management and nutrition.”

Flock variability source
Getting to the bottom of the cause of that variability could have significant ramifications for the industry. According to Widowski, every breeder hen produces approximately 150 laying hens and with most of the world’s laying hens stemming from relatively few breeder flocks, one breeder flock can have broad influence on behaviour and welfare of laying flocks.

Typically, layer breeder flocks begin producing offspring at approximately 20 weeks of age and keep producing until about 70 weeks of age. The older hens get the larger their eggs become. The quantity of solid content in the egg also changes with age and yolk testosterone concentration decreases. These are all factors that can affect the embryo as it is developing.

Anxiousness in offspring
Ultimately, the research team discovered that the age of the breeder hen matters when it comes to behaviour of the offspring, particularly with respect to fearfulness and susceptibility to stress. Offspring from older hens were less anxious and responded differently to stressors in their environments.

The younger the breeder hens, the more their chicks would produce distress calls when isolated. Those same offspring were also less likely to struggle during restraint and took longer to approach an unfamiliar object. The responses were less pronounced in birds where the mothers were raised and housed in aviary systems. The researchers also found that genetics were a contributing factor.

Brown and white birds, for example, responded differently to behavioural tests, with brown chicks vocalizing more distress when isolated from their peers and appearing more fearful when restrained. As well, brown hens tended to freeze or become immobile when startled, whereas white hens displayed a stronger “flight” response.

Breeding flock age
“We know that age affects egg and chick size, but it’s never been established before how it affects behaviours,” Widowski says, adding that more work needs to be done to replicate the outcomes in different flocks. “It’s too early to make any actionable recommendations, but it would be great if both researchers and producers could start keeping track of the age of the parents of their layer flocks, so we can look for patterns in the data from the field.”

As part of the study, the research team raised commercial hybrid hens in aviary or conventional cages, and then moved to aviary, conventional-style or enriched cages. This included two cohorts of Lohmann Selected Leghorn-Lite hens that produced six offspring flocks from insemination at 25, 44 and 68 weeks of age. At various ages, the offspring were tested for how they responded to isolation, novelty social stress and restraint.

Adjusting to new environments
According to Widowski, birds have to be calm, smart and in good health to perform well in aviary systems. As more of the global egg industry transitions away from caged production to alternative housing systems, it’s important to pay attention to the different factors that could impact birds’ ability to adjust and thrive in new environments.

Widowski worked with Leanne Cooley and Mariana Roedel Peixoto on this study, which is part of work supported by the second national poultry science cluster. Specifically, this research was funded by Agriculture and Agri-Food Canada, the Canadian Poultry Research Council, Egg Farmers of Canada, Ontario Ministry of Agriculture, Food and Rural Affairs and LH Gray & Sons. In-kind contributions came from Lohmann Tierzucht Canada and Hendrix Genetics.