Sierra Leone could have a sustainable poultry industry

With a little help, farmers in Sierra Leone could have a sustainable poultry industry 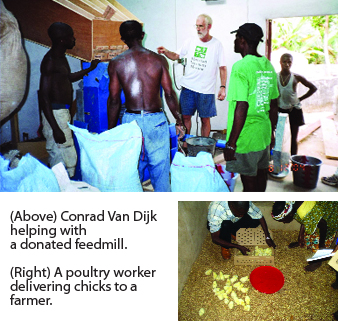 On Sept. 17, 2007, in a small village in Sierra Leone, as the Christian Veterinary Missions of Canada  led a poultry seminar with about 50 farmers, the streets suddenly filled with people cheering, singing and dancing.  Election results had been announced and there was a new government in power – something of great significance because, for the first time in 40 years, there had been a successful democratic election of government in Sierra Leone.

For five years, since the end of a brutal civil war, I have been making visits to Sierra Leone to help farmers and in that time, I have seen slow improvement in the economy. The first election in August and the run-off in September caused great fear of violence, price increases (cost of rice doubled!), and work layoffs which resulted in a significant increase of hunger and poverty.

With the relatively peaceful change of government, there is now renewed hope that perhaps Sierra Leone can climb out of the deep pit of poverty, disorganization and lack of infrastructure.

Our pilot poultry project began in 2003 to see how we could help poor, rural farmers and to discover the challenges of establishing a poultry industry.  We knew obstacles were inevitable and we’ve certainly learned a lot along the way!  The only hatchery in Sierra Leone closed shortly after the start of our project and our next source of chicks in the neighbouring country of Guinea was closed due to soldier uprisings.

Our chicks are now flown in from Holland.  There is no commercial feedmill in Sierra Leone so ingredients were mixed by hand until 2004, when a Farmatic feedmill was donated by an Ontario farmer, rebuilt by an equipment dealer, and has been working ever since. Obtaining feed ingredients, however, is a challenge as they need to be collected and/or imported.  Experienced management personnel are frequently hard to find because of the country’s drain of experienced and educated people.  Transportation and marketing channels are not well established, there is a lack of trained mechanics, and the list goes on and on.  Last year the avian influenza hit West Africa, sparing Sierra Leone but instilling fear and making it suddenly difficult to market chickens.  Thankfully this fear has passed but the borders were closed, so importing chicks was impossible.  And the challenges continue!

The hope of a more stable government brings the hope of a more stable economy and the people of Sierra Leone are very hard working and willing to do anything. We are currently working with 60 farmers and hope to have 100 farmers set up with poultry flocks by January 2008.  We hope to have at least another 100 farmers in 2008 and maybe more as individuals, groups, and organizations are willing to lend their support by sponsoring farmers.

It costs about $950 to set up a farmer with a small chicken house with 200 broilers or 100 layers. Building a house from local materials costs less than $100 and the rest is invested into chicks and feed from which the farmer receives the profit.  The remainder of the money is reinvested into the next crop of chickens. Chicken manure is used for their vegetables or other crops and has proved almost as valuable as the chickens themselves.

A flock of 200 chickens can provide a farmer with an income equal to a labourer’s wages. Our project management costs are about $3,000 per month and will increase as the project expands. It is our long-term goal to have at least 1,000 farmers and a self-sustaining industry that includes a hatchery, feedmill and processing. n

You can assist the Sierra Leone project by giving your loved ones a unique and meaningful Christmas gift – chickens.  Single broiler chicks are $2, layers $8, or you can purchase a small chicken house ($80) or help set up a farmer. For more information, visit www.cvmcanada.org