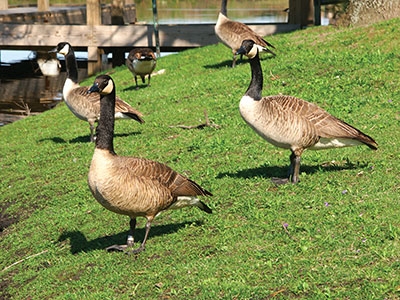 Proper biosecurity practices go a long way toward keeping your birds protected against diseases that are transmissible by wild fowl.

As flu seasons begins, the risk of re-emergence of avian influenza A viruses (AIVs) increases. In light of this, the Food and Agriculture Organization of the United Nations (FAO) is urging increased precautions and continuous surveillance by all countries.

Past AIV outbreaks have caused huge economic losses in the food and agriculture industry. The H7N3 AIV outbreak in British Columbia in 2004, for example, caused an estimated loss of over $300 million.1 Of even greater concern, however, is the potential risk of livestock-to-human transmission of AIV causing zoonotic disease, and the recent outbreak this year of the deadly H7N9 reported in China exemplifies this. While this outbreak may seem to be far away geographically, experience with the Toronto SARS coronavirus outbreak in 2003 illustrates just how closely we are linked by air travel in a way that nullifies any geographic distance.2

AIVs are classified as either highly pathogenic, which cause high mortality rates in poultry species and can infect humans, or low pathogenic, which are commonly associated with mild clinical symptoms in birds.3,4,5

Most highly pathogenic AIVs belong to the H5 and H7 subtypes, and their occurrence must be reported to the OIE World Organisation for Animal Health.5 Those that are highly pathogenic are believed to arise in poultry through genetic mutations that occur after infection with a low pathogenic strain from wild birds.4,7 Transmission occurs primarily via infected fecal matter and contaminated water, but it also can occur via inhalation of infectious particles.5 Since most poultry barns in Canada are contained populations, risk of transmission arises from secondary transfer by humans, vehicles and machinery moving among barns.8 Other risk factors for AIV infection include the age of the bird, stocking density, ventilation and temperature.4 Swine populations are also particularly important in the transfer of disease, since they can become infected by both avian and human influenza and could act as mixing vessel of genetic material.4 Human infection is thought to occur from contact with infected avian species, uncooked poultry products, or contaminated manure, vehicles and surfaces.9

The current diagnostic test for AIV infection involves real-time RT-PCR (reverse transcription-polymerase chain reaction) detection of viral genes, and this is successfully being used worldwide.10 Samples are preferably taken from the upper or lower respiratory tract of the animal, in addition to blood, but the samples can also be collected from rectal swab or spinal fluid.11

Since there is no treatment for AIV infections, the only way of eliminating it is through the culling of infected flocks. Vaccinations are widely used in many countries, but proper management programs are necessary for successful results and ongoing viral antigenic drift may influence their effectiveness.12

Canada’s prevention program against AIVs involves intense surveillance of wild avian populations to predict areas that may be at risk for an outbreak, as well as strict importation regulations of avian products.13 Proper implementation of intensive biosecurity protocols is also extremely important for protecting our avian flocks and public health.

This article was an assignment by Sarah Ferguson in the fall 2013 Animal Health course (POPM4230) taught by Dr. N.A. Karrow, Department of Animal and Poultry Science, University of Guelph, Guelph, Ont.